A leaf is taken out of the Qur’ān and Aḥādīth as once again, science falls back on Islamic teachings to lead the way
News Views 03/10/2022No Comments7 Mins ReadBy Shaheer Choudhury 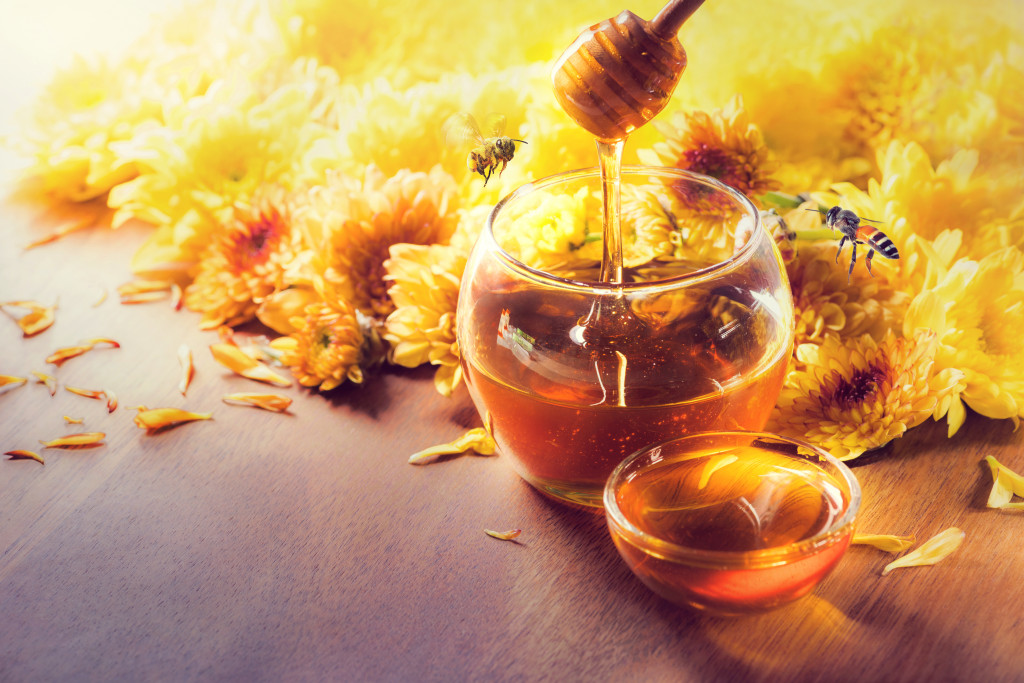 The body of understanding surrounding the use of honey in medicine is one that has continued to grow over millennia. A 2020 piece published in the medical journal, Antibiotics, argued that in the fight against antibacterial resistance and the prevalence of superbugs, honey ought to be considered as an alternative to antibiotics. Now, once again, the medicinal and more specifically the scientific use of honey is being strongly encouraged as within a study published in the journal, Pharmaceutics, researchers from the University of Manchester have analysed historical records dating back to 1937, which look into the healing properties of the sweet substance. [1] [2]

After reviewing in excess of 250 studies dating back almost one hundred years, the team of experts has concluded that honey has “exceptional antimicrobial and tissue-regenerative properties”, which create the opportunity for use against burns, wounds, and other common bodily trauma. The study, titled Honey: An Advanced Antimicrobial and Wound Healing Biomaterial for Tissue Engineering Applications, has been collaboratively worked upon by researchers from not only the University of Manchester’s Division of Pharmacy & Optometry, but also the Nanyang Technological University of Singapore; the Gumusova Vocational School, Duzce University, Turkey; as well as Manchester’s Department of Mechanical, Aerospace and Civil Engineering, and its Department of Engineering. [1] [3]

Honey is a prophetic example, the healing aspect of which Allah has revealed in the Qur’ān

Certainly, the varied use of honey has been widely documented over the course of history. The ancient Egyptians used honey for medicines as well as rituals and even as a form of currency; the Romans imported vast quantities of the viscous liquid for cosmetics, cookery (as a condiment, a sweetener, and as a preservative), and medicine. Indeed, the Romans are known for having imported large amounts of honey from Malta – which was at the time (and still is) celebrated for its honey production. Interestingly, the etymology of Malta comes from the Greek name for the island, Μελίτη, or Melitē, which translates to “sweet honey”. However, the antimicrobial functions of honey have only truly been identified and explored in the last century. [4]

Impressively, the Pharmaceutics journal article refers to the Qur’ān as well as the Bible in their mention of the healing properties of honey. As explained in the article’s introduction, the authors write,

“Honey has historically been used for medical purposes by various cultures since ancient times, due to its antimicrobial and regenerative properties. The ancient Egyptians utilised honey to treat wounds, which has been experimentally demonstrated to be efficacious in promoting healing and preventing infections … For a long time, honey has been prescribed in traditional medicine such as the Indian Ayurvedic system for a variety of illnesses.

“Furthermore, there are direct references to honey consumption in the Bible (The Bible, Proverbs 24:13) and in the Quran (16:68–69), which mentions the “emerging drink from the bee’s bellies, in which there is healing for people”. The historic and continuing global usage of honey as a therapeutic agent pertains to its remarkable antimicrobial efficacy and tissue-regenerative properties.” [3]

While many different civilisations have utilised honey for its medicinal properties in treating wounds, it is fascinating to learn that honey is produced by only eight different species of bee – a minute fraction of just 0.053% of the estimated 15,000 species in the world. In addition to the select number of species producing honey, the actual production process is extremely complex. As the authors note in the journal article,

“Honeybees produce honey through a complex process beginning with the collection of floral nectar (floral or blossom honey) or sugar-rich secretions from insects (honeydew honey) as raw materials. These are stored and processed in their hives.” [3]

The researchers further elaborate by stating,

“The bees dehydrate, add their own compounds to, and modify the nectar through the secretion of specific enzymes to break down sugars. The modified nectar matures and develops into honey. Honey is a viscous and concentrated aqueous sugar solution generally comprising fructose (~40%), glucose (~30%), sucrose (~5%), small quantities of disaccharides (e.g., maltose, isomaltose, and turanose), and water (~20%). It is worth noting that these percentages are only representative and can substantially differ due to botanical sources, nectars, and seasons” [3]

Moreover, Allah revealed in the Qur’ān,

“And your Lord inspired to the bee, ‘Take for yourself among the mountains, houses, and among the trees and [in] that which they construct. Then eat from all the fruits and follow the ways of your Lord laid down [for you].’ There emerges from their bellies a drink, varying in colours, in which there is healing for people. Indeed in that is a sign for a people who give thought.” [5]

And in a hadīth narrated by Abū Sa`īd al-Khudri (radiy Allāhu ‘anhu), it is reported that a man came to the Prophet (ﷺ) and said,

Writing in the medical journal, Microbiology, researchers from Birmingham’s Aston University have also recently concluded promising experiments that combine manuka honey with the drug, amikacin, and open the possibility of treating “a potentially lethal lung infection and greatly reduce side effects of one of the current drugs used for its treatment.” [7] The lung infection in question is Mycobacterium abscessusus or M. Abscessus. The rapid-growing M. Abscessus is a drug-resistant mycobacterium of the kind that originates from the same family of pathogens that produce tuberculosis (TB) and leprosy. However, M. Abscessus itself does not produce either of the aforementioned infections. Instead, the pathogen does cause other pulmonary diseases that resemble TB. It commonly affects patients with cystic fibrosis (CF) or bronchiectasis.

Bronchiectasis is explained by the NHS to be a long-term condition where the lungs’ airways become widened, thereby causing a build-up of excess mucus that in turn causes the lungs to become more vulnerable to infection. [8] Cystic fibrosis is an inherited condition that “causes sticky mucus to build up in the lungs and digestive system. This causes lung infections and problems with digesting food.” [9]

The use of manuka honey in this medicinal way is testament to the prophetic and Qur’ānic teachings that encourage the intake of honey. The twin developments regarding manuka as well as the argument for replacing the ever-decreasing power of antibiotics with honey in the fight against superbugs makes us proud to be Muslims, and also leads to the remembrance of a well-known du’ā…

“If anyone says ‘I am pleased with Allah as my Lord, with Islam as my religion and with Muhammad (ﷺ) as my Apostle’, Paradise will be his due.” [10]