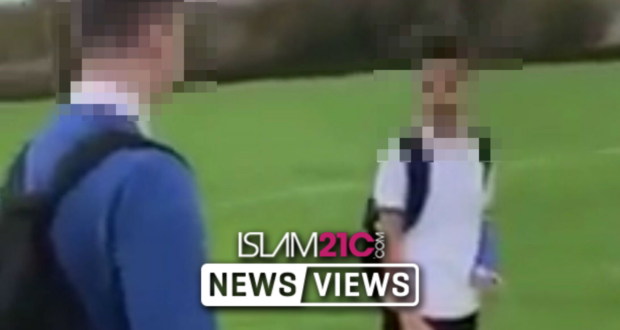 A video has been widely circulated online showing the sister of the Syrian refugee who was violently assaulted, being bullied and pushed to the ground in a mock “waterboarding” in the same school in Huddersfield. [1]

The footage of the assault shows a girl wearing a hijab being shoved by another girl from behind before being pushed again and falling to the ground.

In a separate video released earlier, the girl’s brother,15, is also shown to be attacked by another pupil aged 16, where he is pushed and then shoved and pinned to the ground and has water poured onto his face.

According to West Yorkshire Police, the first video showing the boy being attacked took place on October 25th.

The 16-year-old male pupil, who cannot be named, is to be charged with assault and will appear in a youth court, although it is yet to be known if the suspect responsible for attacking the girl has been apprehended.

“We have been made aware of a video showing a girl being assaulted at Almondbury Community School,” West Yorkshire Police said in a statement.

“The incident had not previously been reported to the police but we are now liaising with the girl’s family who we are continuing to support,” they added.

In an interview with the BBC, the father of the brother said that the assault had left his son “very physically tired” and that “because of what happened in the video my son is shattered”.

“He is not concentrating on his studies. When he is asleep he wakes up saying ‘they want to beat me up’,” he added.

A ‘go fund me’ page was set up for the 15-year-old boy and his family, after the video of him being assaulted went viral. More than £100,000 has been raised so far.

According to local media, the family are considering to leave Huddersfield having been offered to be relocated in Oxford. [2]

Many have credited the shifting power dynamic brought about by social media for bringing this Islamophobic bullying to light. The attack which happened in October was forced into “mainstream” news headlines by going viral by ordinary members of the public, particularly the Muslim social media sphere, prompting many to accuse traditional media corporations of only covering the story because it became “too widespread to ignore”.

This has been seen as a lesson for Muslims to make a noise and call out Islamophobia when they see it, in contrast to the “quietist” method of expecting others to raise awareness within discourses that are structurally geared to create scapegoats out of Muslims and the demonisation of immigrants in particular for political reasons.

The absence of Muslims contributing to such debates in various spheres can be seen in the type of reluctant coverage of these recent events, where corporations such as the BBC have framed this within a broader “bullying” narrative, choosing to downplay and, at times, completely neglect to mention at all the racism, anti-immigrant and Islamophobia subtext of these assaults.