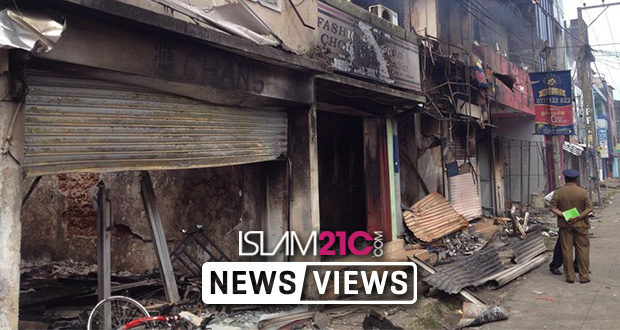 State of Emergency Declared in Sri Lanka as Muslims are Targeted

The government of Sri Lanka has declared a state of emergency following mob attacks on Muslim homes, businesses and masājid this week. Soldiers and extra police have been deployed for a period of at least 10 days with the hope that the violence will be brought to an end, although early signs are that some of the Sinhalese attackers are still finding ways around these measures.[1] Social media has also been blocked or restricted to prevent the spread of anti-Muslim sentiment,[2] while a curfew is in place in the central town of Kandy, around which much of the violence has taken place.[3]

At least 2 have been killed so far, and many others injured. More than 150 homes, shops and vehicles are said to have been destroyed as well.[4]

The violence began with the death of a Buddhist man, who was reportedly involved in a road traffic accident with a group of Muslims, who then allegedly reacted violently. Rumours subsequently spread and appear to have stirred up anti-Muslim hatred that had been long-simmering within certain quarters. Two hard-line Buddhist monks with large social media followings and a history of inflammatory language are said to have capitalised on the situation and mobilised their followers to take revenge on an entire community over the actions of individuals.

Muslims make up roughly 10% of the population of 21 million on the island, which had seen decades of civil war finally come to an end in 2009. The ruling party at the time, led by Mahinda Rajapaksa, went on to enjoy wide support from much of the Sinhalese majority for a number of years until his surprise election defeat in 2015. During his tenure, he was accused of war crimes, nepotism and corruption.[5] His brother Gotabhaya Rajapaksa, Minister of Defence at the time, was an open supporter of Buddhist extremist group Bodhu Bala Sena (“BBS”), who drove a violent hate campaign against Muslims in 2014 and saw a huge rise in anti-Muslim sentiment.[6]

The current government are taking steps urgently to control the violence; Prime Minister Ranil Wickremesinghe quickly condemned the “racist and violent acts”,[7] whilst the government released a statement:

“The Government also condemns the hate and mischievous misinformation campaigns carried out by some, especially via social media, targeting the Muslim community in particular, and others as well, with the clear objective of creating disharmony among communities and inciting violence.”[8]

In the meantime, schools have been shut and the situation remains volatile.

Previous: Stern action, not just stern talks, needed to end onslaught in Eastern Ghouta
Next: Which is the “Correct” Rebel Group in Syria?