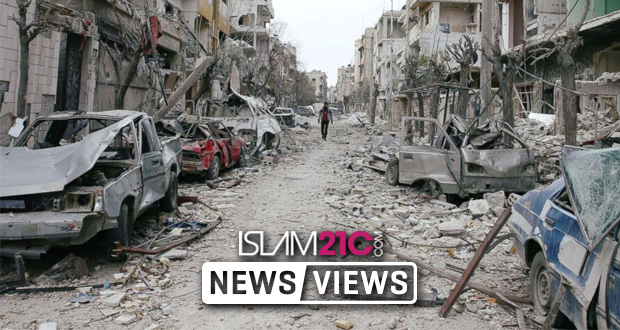 The United Kingdom has asked the UN Human Rights Council to hold an ‘urgent debate’ in Geneva regarding the situation in Eastern Ghouta.[1] President Donald Trump and Prime Minister Theresa May have both agreed Russia is responsible for this catastrophe. [2] Syrian President Bashar Al-Assad has vowed to continue the military offensive despite Putin’s humanitarian truce. The truce still allows the regime to rain bombs down upon Eastern Ghouta 19 hours a day.[3]

The death toll in Eastern Ghouta in recent days has been registered as the worst in the seven-year conflict.[4] The United Nations and its supporting partners are delivering 46 truckloads of supplies for health and nutritional purposes as well as food for over 27,000 people.[5] However, the World Health Organisation reports that the Syrian regime has deliberately removed 70% of medical material from UN vehicles during inspections, thus preventing the delivery of life-saving medicine and equipment.[6]

In order to make the most of the food, the besieged people have resorted to reducing meal sizes, skipping meals altogether and some have resigned themselves to fasting days on end.[7] Here in the UK, eight charities have united to respond to the crisis.[8] One of these charities, Human Aid UK has delivered food to nearly 3,000 families since the 2nd of March.

Human Aid UK had the following statement to make:

“The people of Syria, in particular the inhabitants in Eastern Ghouta, have been subjected to every kind of deprivation. Children are dangerously malnourished and psychologically traumatised. We appeal to the international community to send a powerful message by cutting off relations with the Syrian regime and its allies. It is high time we brought an end to this evil war.”

Delivering aid into Eastern Ghouta has proven to be extremely difficult as reports state that aid trucks are being forced to flee the region without unloading the aid that was intended for the people. A member of the Douma Local Council, Iyad Abdelaziz stated that as a result of heavy regime shelling and intensified airstrikes, nine aid trucks have had to flee the area. [9]