Are you ready for our first ever NATIONAL CAMPAIGN?
Home / News / Three Muslim doctors first to sacrifice their lives while fighting COVID-19 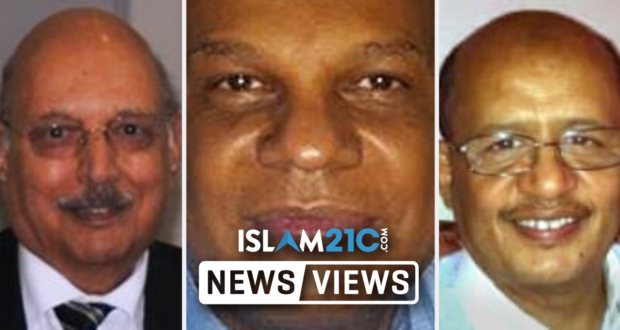 Islam21c would like to offer its heartfelt condolences to the families of three great heroes who sacrificed their lives while helping those affected by COVID-19 in the UK.

Dr Habib Zaidi (76), Dr Adil El Tayar (63) and Dr Amged El-Hawrani (55) all passed away and returned to Allāh after contracting the coronavirus while performing their duties as part of the NHS.

Three NHS doctors have sadly passed away after contracting COVID-19.

My heart goes out to the loved ones of Dr Amged El-Hawrani, Dr Adil El-Tayar and Dr Habib Zaidi.

And to all our frontline NHS staff: thank you for your courage & self-sacrifice ♥️

A “well-respected and loved GP”, Dr Habib Zaidi died in intensive care at Southend Hospital in Essex after showing “textbook symptoms” and starting treatment for a suspected coronavirus infection. He was the first doctor in the UK to die after contracting the virus.

His daughter, Dr Sarah Zaidi, commended her father’s dedication to the cause saying:

“For that to be the thing that took him is too much to bear. It is reflective of his sacrifice. He had a vocational attitude to service.”

“He left a gaping hole in our hearts, but a loss that is also felt within the community that he devoted almost his entire life to.” [1]

Dr Zaidi’s character and demeanour were “highly revered by staff and patients alike”. Two years ago, he won an excellence award from the NHS Southend Clinical Commissioning Group who described him as a “legend”.

As per the new government guidelines, a funeral was held in south Essex but with only a handful of immediate family members in attendance to minimise the spread of the virus.

Dr Adil El Tayar became the first working NHS surgeon to die from COVID-19 in the UK. After graduating in 1992 from the University of Khartoum, Sudan, he moved to the UK in 1996 to continue his studies. Dr El Tayar worked as an organ transplant surgeon at St George’s Hospital, Tooting, before moving to Saudi Arabia in 2007, working for three years in Jeddah. In 2011, Dr El Tayar moved back to his native Sudan to help establish a transplant program and worked at the Ibn Sina Hospital, Khartoum. He passed away at West Middlesex University Hospital in Isleworth, West London.[2]

“Adil was someone who was central to our family, who was well-respected by so many people.”

“Since his death on Wednesday I have had hundreds of text messages from his colleagues and friends. He will be sorely missed.”

“He was an excellent colleague, a truly humble soul.”

“Mr El Tayar was a very hard working and dedicated surgeon who gave the precious gift of life to so many people around the world by his excellent transplanting skills.”

Described as “a loving and much-loved husband, son, father, brother, and friend”, Dr Amged El-Hawrani was a frontline ENT (ear, nose, and throat) consultant at the University Hospitals of Derby and Burton. He became one of the first senior medics to die from coronavirus.

“His greatest passions were his family and his profession, and he dedicated his life to both.”

“We would like to thank all those involved in his care for their kindness and compassion during his illness.”

“They worked tirelessly for their patient, as he would have done for his own.”[3]

His 18-year-old son Ashraf was “proud to say Amged El-Hawrani was my father”.

“He taught me the significance of respect and equality. He also stressed the importance of not worrying about the things I cannot control, which he displayed to me right up until the end of his life.”

“He did not seek the praise and approval of others, he was satisfied by viewing the positive effects of his actions and the wellbeing of his family. I am incredibly proud to say that for 18 years of my life, Amged El-Hawrani was my father.”[4]

While the media’s onslaught of Muslims or those of African and Asian backgrounds and their contribution to society continues, these three men did not just embody ‘British values’, but also ‘Islamic values’, continuing to serve on the frontline amidst the critical nature of their work.

“And whoever saves one – it is as if he had saved mankind entirely.”[5]

The media forgot to mention the ethnicities or the religion of these men because they did a good job that we are all proud of. On the other hand, if these men or their likes did something shameful, the media would immediately point out that they were either Muslim, Asian, Arab, or Black.

Only yesterday, The Mirror changed the colour of cartoon characters to depict an all-white medical team thanking NHS health workers, despite the first doctors to pass away in the service of people being three brown Muslims of African and Asian background.

#notevenwhenweresavinglives – I wonder if the Mirror felt that there would be less sympathy for NHS workers if they left the colours of healthcare professionals in the original stock photo. Well spotted by Mohammed Sadiq, more here: https://t.co/yJEk943Kow pic.twitter.com/hBzAoTHvD3

RIP. May we NEVER forget what immigrants, and their children and grandchildren, have given this country, especially our health service. https://t.co/3JLSilO4BD

“Two of these doctors are believed to be of Sudanese origin where the capital Khartoum was supposed to have been built in the shape of the Union Jack and one of them is believed to be Iraqi origin where Britain has invaded and occupied 3 times in last century.”

“As Gurminder K Bhambra puts it: Britain didn’t have an empire, Britain WAS an empire. Remember that despite the attempts to con you into vertical solidarity and horizontal blame, people like these three doctors died for you when people with names like Boris Johnson hurt you.”[6]

Perhaps those that have an axe to grind against Muslims, whether pursuing forced assimilationist agendas, racist immigration or counter-“extremism” policies, or dehumanising Muslims for calling for their statutory rights of what and when to teach their children about sex and relationships, will take heed that Muslims are here to stay and should be treated as part of the society.