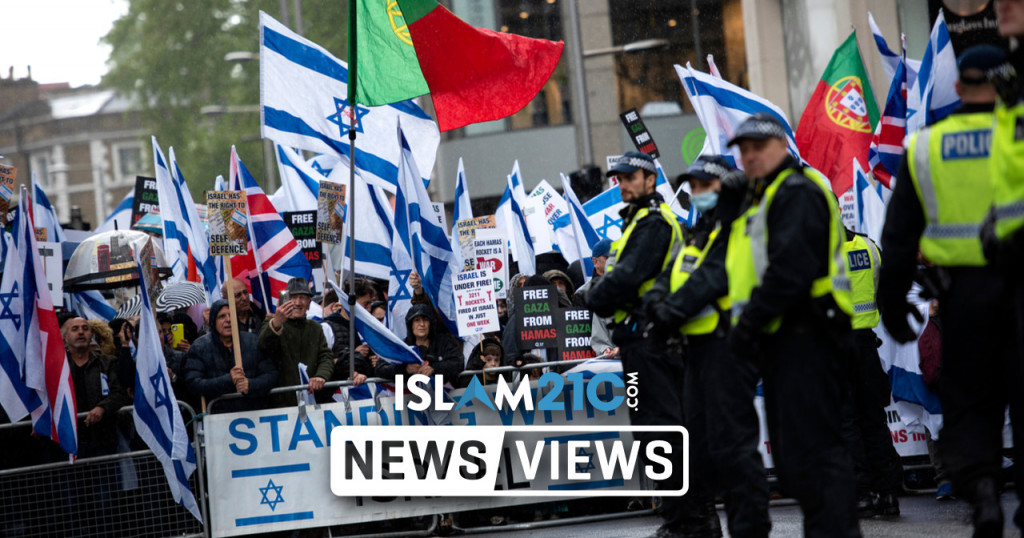 The Board of Deputies of British Jews has refuted Tommy Robinson’s extremist views and censured him after he attended last Sunday’s pro-‘Israel’ rally organised by the Zionist Federation of Great Britain and Ireland. The rally, which saw a poor turnout, took place in London on the back of two consecutive weekends of pro-Palestine demonstrations in which an estimated 150,000-200,000 people marched on May 14th and May 22nd. [1] [2] [3]

Stephen Yaxley-Lennon (aka Tommy Robinson) & supporters of of far-right extremist organisations like the English Defence League are not welcome at our community’s events. Their message of hate and division must be confronted and defeated. We utterly reject their bigotry. https://t.co/JFb5V0Vl3G

Robinson – whose real name is Stephen Yaxley-Lennon – has for years espoused staunchly anti-Muslim views. He is known as the founder of the dwindling English Defence League (EDL), an institutionally Islamophobic and extreme-right organisation in British politics. In addition, Yaxley-Lennon is a criminal who has been thrown behind bars previously for an assortment of convictions, including common assault, using false documents to enter another country, mortgage fraud, and contempt of court. His CV even goes as far as to include a conviction for attacking one of his own EDL supporters in 2011 [4]. Furthermore, since early 2019, he is permanently banned by the social media websites Instagram and Facebook after having repeatedly broken both websites’ hate speech policies. [5]

“Tommy Robinson’s Facebook page has repeatedly broken these standards, posting material that uses dehumanizing language and calls for violence targeted at Muslims. He has also behaved in ways that violate our policies around organized hate.” [6]

Sunday’s pro-‘Israel’ rally, which pales in comparison to the titanic rallies in London held in solidarity with the oppressed people of Palestine and in honour of Masjid al-Aqsa, saw around 1,500 attendees gather outside the Israeli embassy in London. One of the event’s speakers was none other than the notorious Israeli ambassador to the UK, the Nakba-denier Tzipi Hotovely.

Akin to those who deny the Holocaust, Hotovely is infamous for her Nakba denial made during an event held by the Board of Deputies. In December 2020, the Israeli ambassador attempted to erase history by claiming that the Palestinians “…made up a story that is called the Nakba.” [7]

In the rejection of Tommy Robinson’s flavour of politics, which primarily consists of a politics of division, the right-wing Jewish Zionist organisation has now displayed its crystal-clear hypocrisy in the matter – it has condemned one extremist yet appears to view another’s unacceptable remarks in a different light.

During this most recent escalation in violence by the Zionist regime towards the Palestinians, the Israeli government has appeared desperate on social media and television channels. The ‘top dog’, the Israeli Prime Minister, attempted to shore up support via Twitter in an ill-fated video, which other Twitter users instantly responded to with parodying replies [8] [9]. More recently, the Israeli government has even gone as far as to pay for graphic advertisements to run on media streaming sites such as YouTube, warning viewers that “Israel will protect its citizens against Hamas’ terror.” However, such ads were quickly removed from the platform following complaints that they contained “violent imagery”. [10]

I…. didn’t know this was a thing?! 😳 Got a pretty graphic propaganda “ad” on YouTube just now, from the State of Israel. pic.twitter.com/IH08u7Pwow

Whilst the Board of Deputies has attempted to distance itself from the likes of Yaxley-Lennon, it is no secret that he is an asset to the Zionist movement. To this end, the acclaimed rapper and political activist Lowkey recently released a video exposing the funding of Yaxley-Lennon and people on his wavelength, such as Katie Hopkins.

“What we see here is an intertwining of interests between Zionist actors around the world who believe that their interests are served by not only funding violent settlements in the West Bank and a war against indigenous Palestinian people, but also pushing domestic Islamophobia within Britain and the United States.” [11]

In the same video, Lowkey highlights the financial backing of Elad by billionaire Roman Abramovich, the Russian owner of Chelsea FC. Elad – also known as the Ir David Foundation – is an extremist association that is behind numerous settlements and forced evictions in the Palestinian city of Jerusalem. Elad has benefitted lusciously from contributions totalling $100m from Abramovich. The likes of Hopkins, Yaxley-Lennon, and Abramovich are therefore loosely linked due to their Zionist beliefs. [12]

Miqdaad Versi, the long-time spokesperson for the Muslim Council of Britain, and “the UK’s one-man Islamophobia media monitor”, [13] made a point that despite the paltry pro-‘Israel’ rally seeing perhaps less than 1% of the total attendees compared to Saturday’s pro-Palestine march, and the gracing of the event by Yaxley-Lennon, some of the mainstream media have still managed to negatively portray Saturday’s pro-Palestine march, even though Yaxley-Lennon was hugged, cheered, and welcomed by the crowd at the Israeli protest. [14]

This man was cheered on by so many of the crowd.

And even Tommy Robinson – watch how he is hugged by one of the crowd..

Yet this was what we saw. pic.twitter.com/pROHJypRMH