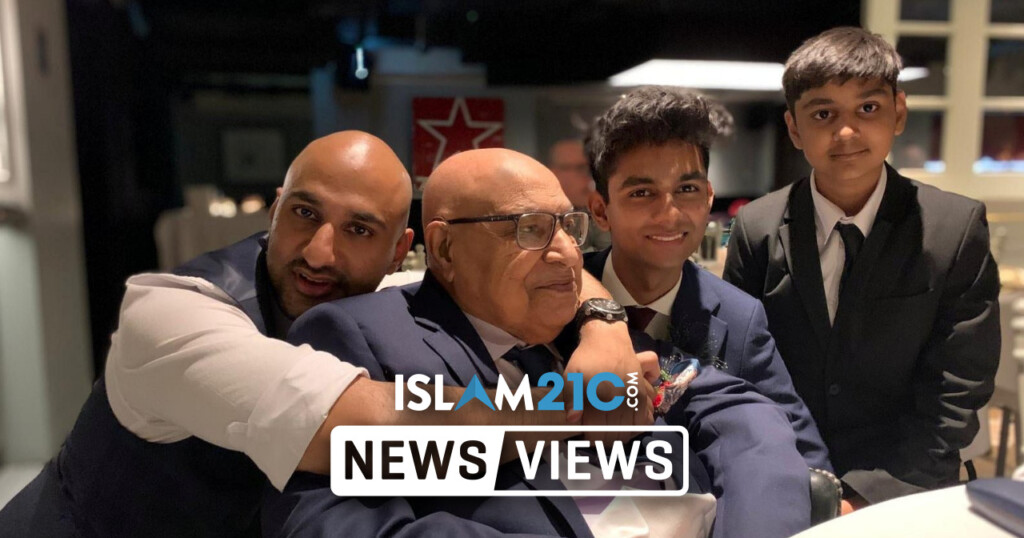 Indeed we belong to Allāh, and indeed to Him we will return.

Mr Ahsan-ul-Haq Chaudry, 81, a senior educator from East London, passed away approximately two weeks ago at Queen’s Hospital in Romford. Chaudry left behind his children and a wealth of knowledge, and was a beacon of hope for the Muslim community at large.

His story has been covered by the BBC, The Mirror, Good Morning Britain, ITV, Yahoo, Metro, The Daily Mail, and others. All six of his children listed below are currently working on the NHS frontline.

Mr Chaudry came to Britain in the 1950s at the age of 19, after the 1947 partition of India and Pakistan. He was a Maths and Computer Science teacher in East London, and became widowed when his wife Fauzia Ahsan passed away recently in 2019.[1]

Shaykh Abu Eesa described Uncle Ahsan as “a thinking Muslim who would openly question everything around him who even got me thinking as a kid”, calling him possibly the “first key influence in my deeni and professional life”, adding that “he made so many people happy, confident and aware of themselves and Allah, without even trying hard or making it obvious.”

One of his daughters, Dr Saleyha Ahsan, said:

“What he did as a migrant who came with nothing to building this all up was incredible. He was very humble about it and never made a big deal out of anything.”[2]

Another one of his former students, Jas Athwal, Labour Leader of Redbridge Council, said:

“Saddened to hear of the passing of Mr Chaudry, a pioneer way ahead of his time. Taught me computer science at Mayfield High School when the school had no computers. With his dedication & support, I was able to rise to the top in the field of computer science.”[3]

“He supported us in absolutely anything and everything we wanted to do.”

As an asthmatic, Mr Chaudry began shielding at the start of the COVID-19 outbreak, but his condition deteriorated during the winter holidays and he passed away after a few days in intensive care.

Dr Saleyha spoke about the final days she spent with her father, given she was looking after COVID patients. She said that as his oxygen requirement levels increased, her father had to make difficult choices between breathing and drinking fluids. Her experience in hospital illustrated “how lethal this disease is” and what “not being able to grieve actually means”.[4]

Another of his daughters, Dr Syira Ahsan, describes working during the second lockdown like being in “a war zone”. She highlighted the need to not be complacent when following government guidelines, and that the virus is lethal for the “elderly population”. She said she has seen “grown men crying” as the NHS “has got their hands tied as to what we can offer because they don’t meet the threshold to be admitted.” Dr Syira Ahsan noted that “Covid has exploded” during this third lockdown, and continued to say:

“The most precious people I think in society are our elderly and we would be so selfish to become complacent and lose them. That’s why we don’t have a choice but to be vigilant.”[5]

“Now, you’ve got the usual paediatric patients with adult Covid patients to care for on top of that and I think the next couple of weeks could be the hardest yet … I’m so proud of my colleagues but the NHS is chronically underfunded and we’re seeing the consequences of that now … The thing about my parents was that they were very, very kind … I didn’t see him as much as I would have liked this year and I really missed him, the phone wasn’t the same as sitting there in person with a cup of tea.”

“We’d do really nice things like cook together. I’d be working and I’d hear him having an in-depth conversation about politics or he’d be watching a gangster film or programme about steam trains … My dad was absolutely fine and covid somehow crept in. It came out of nowhere and killed him.”

“I lived at home with my dad and I’d have a chat with him every morning. He was a friend who was always there … when my mum died last year, he took the mantle of being both mum and dad … Even though he was elderly he’d always do things for you … ‘He’d always ask: ‘Do you need anything?’ which was really nice.”

If you feel moved or inspired by the legacy that Mr Chaudry has left, then his children have asked for you to “donate in his name”.

May Allāh accept our Uncle Ahsan-ul-Haq Chaudry into the highest ranks of Paradise. Āmīn.