The city of Istanbul was rocked by a large explosion on Sunday that caused the deaths of six people and over eighty injured; Kurdish militants have been blamed by Turkish authorities
News Views 16/11/2022No Comments4 Mins ReadBy Shaheer Choudhury 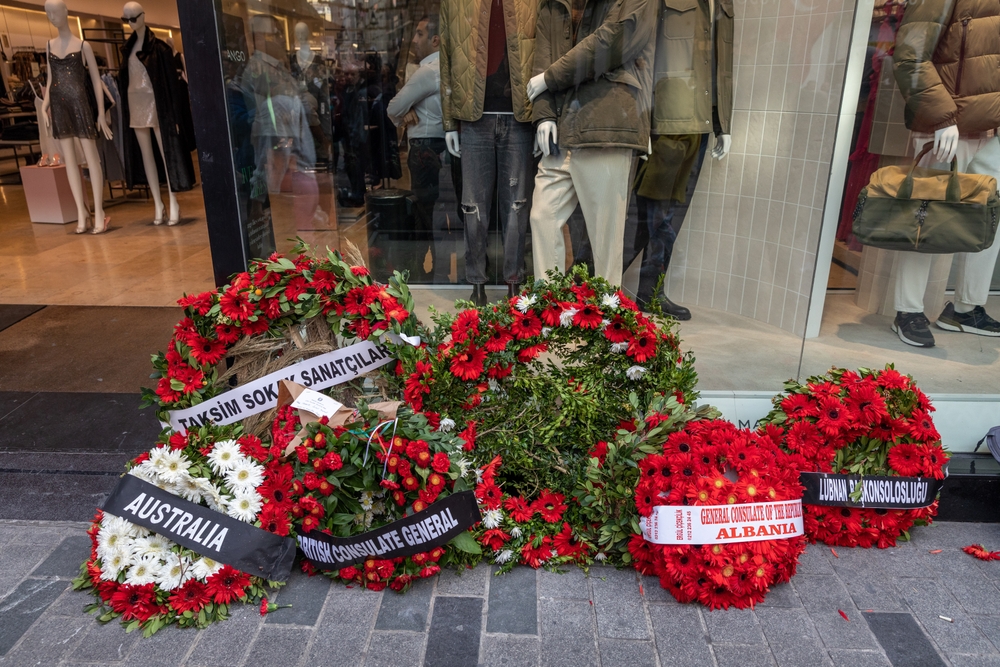 A number of wreaths laid down by various foreign consulates near the scene of Sunday's terror attack. Photograph credit: tolga ildun / shutterstock.com

On Sunday, the Turkish city of Istanbul was hit by a bomb attack that took the lives of a dozen and inflicted injuries on close to a hundred others. The terrorist attack – which has been blamed on Kurdish militants operating out of northern Syria – took place on a popular pedestrian thoroughfare, İstiklal Avenue; the area is a hotspot for tourists and locals. Turkish President Recep Tayyip Erdoğan has described the events as a “treacherous attack”, and that those responsible “will be punished”. [1]

In addition, Turkey’s Interior Minister, Süleyman Soylu, said on Monday that the terrorist attack had been devised in a Kurdish-majority city in northern Syria.

“Our assessment is that the order for the deadly terror attack came from Ayn al-Arab in northern Syria, where the PKK/ YPG has its Syrian headquarters.” [1]

As of Monday, Istanbul police had informed the press that at least 46 people were in custody in relation to the bombing. At the same time, the Turkish presidential communications chief, Fahrettin Altun, criticised the US for its continued backing of Kurdish militant groups in Syria. Altun suggested that Turkey-US relations would be at risk of deteriorating further, if Washington does not change its stance.

“The international community must pay attention. Terror attacks against our civilians are direct and indirect consequences of some countries’ support for terror groups. They must immediately cease their direct and indirect support if they want Türkiye’s friendship.” [1]

For decades, Turkey has been targeted by a number of Kurdish separatist groups, including the Kurdistan Freedom Hawks (TAK) and the Kurdistan Workers’ Party (PKK). Since the 1980s, the PKK group has been responsible for a number of massacres that have taken place in the east and southeastern regions of the country. During the Blue Market attack of March 1999, thirteen civilians were killed; and in the May 24, 1993 attack, 33 Turkish soldiers and a number of civilians died. The February 2016 and March 2016 Ankara bombings were both claimed by the TAK; at least 30 were killed and 60 injured in the former, while at least 37 were killed and 125 injured in the latter. [2] [3] [4] [5]

According to the latest reports, authorities are currently interrogating a female suspect who was observed sitting at a bench in the vicinity of İstiklal Avenue for forty minutes before the explosion occurred. The Justice Minister, Bekir Bozdağ, has told media outlets that a Syrian woman who was allegedly trained by Kurdish forces, was in custody. She is believed to have entered the country through the northern Syrian city of Afrin. [6]

As Istanbul recovers from the devastation of the weekend, the country is being represented by President Erdoğan at the G20 meeting in Bali, Indonesia. Leaders had been discussing matters pertaining to economic cooperation, but this was cut short after a momentary scare involving a missile that landed in Ukraine’s neighbouring country, Poland, and killed two people. [7]

After initial panic and talks of a further escalation in the ongoing Ukraine-Russia conflict that could have brought NATO directly into the fold, Poland and NATO sources have earlier today confirmed that the offending missile was likely one that was fired by Ukraine’s air defence system. [7]

“From the information that we and our allies have, it was an S-300 rocket made in the Soviet Union, an old rocket and there is no evidence that it was launched by the Russian side. It is highly probable that it was fired by Ukrainian anti-aircraft defense.” [7]