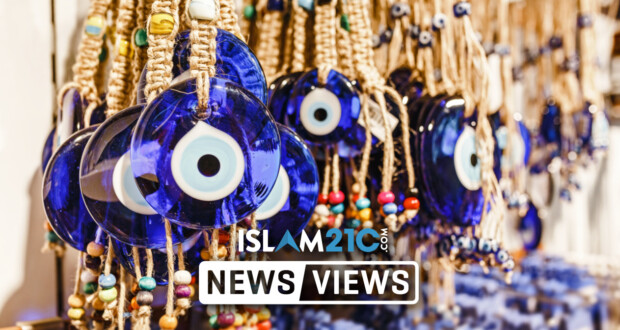 The Turkish Directorate of Religious Affairs, also known as the Diyanet, has published a fatwa denouncing the use of ‘evil eye’ charms, declaring them incompatible with Islamic beliefs and principles.

In a statement, the Directorate said

“Although the nature and condition of the evil eye are not known precisely, it is accepted by the religion that some people can create negative effects with their gaze.”

“In our religion, attitudes, behaviours, and beliefs that attribute the ultimate influence on anything other than Allāh are forbidden. For this reason, it is not permissible to wear evil eye amulets and similar things around the neck or anywhere for the purpose of benefiting from them.”[1]

The blue, black, and white amulets, locally known as nazarlik or nazar boncuğu, are widely sold in markets throughout Turkey and are popular amongst tourists. There is, however, no evidence or proof that these amulets ward off evil and harm.

The amulets date back to as far as 3300 BCE, well before the introduction of Islam in the region. The use and design of the charms were used by pre-Islamic Central Asian Turks who followed shamanistic beliefs.