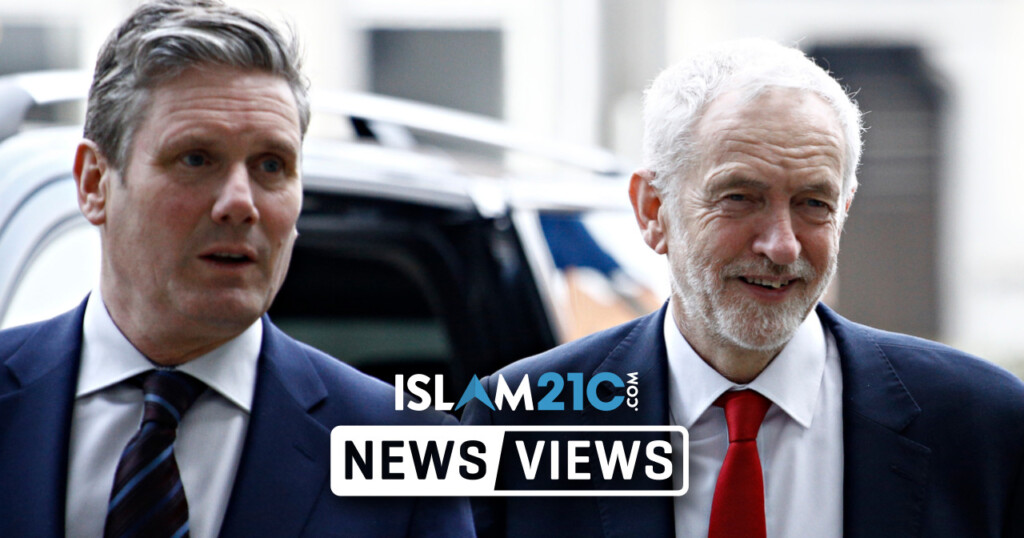 In shocking news revealed by Asa Winstanley on the online investigative publication The Electronic Intifada (EI) – which focuses on Palestinian issues in the Middle East and around the world – the UK Labour Party last year reportedly employed an ex-spy from the Zionist state’s military intelligence department,[1] in the hopes of profiting from his investigatory, surveillance, and hacking experience.[2]

"Assaf Kaplan will work in the office of Labour leader Keir Starmer, a source with knowledge of the hire said."

Assaf Kaplan has been given the lucrative position of reportedly managing the UK Labour party’s social media operations from within the office of the Leader of the Opposition, Sir Keir Starmer. Kaplan is described by his former workplace, the Israeli Regional Initiative – essentially a group of ex-military, defence, and members of the Israeli business community – as “a Unit 8200 veteran, a Philosophy, Economics and Political Sciences student, Tel Aviv University. A graduate of the Israel Leadership Development Program of the LEAD organization”.[3]

Labour, which has been facing fierce opposition to the recent decision by Starmer to deny Jeremy Corbyn the party whip even after his suspension was lifted – continues to confound observers as it moves ever further from its roots and ideals.[4]

According to his public LinkedIn profile,[5] Kaplan is a professional hacker and former member of the notorious Israeli Unit 8200, which is well-documented to have been behind the mass surveillance, systematic discrimination, and blackmail of innocent Palestinian citizens.

We have reached a point where it is actually conceivable that people will be suspended from the party for the crime of pointing out that Labour are employing a former Israeli spy.

It was also reported in January 2020 that the NSO Group – now infamous for being suspected of hacking the phones of dozens of Al-Jazeera journalists,[6] as well as targeting top politicians in Spain and Rwanda, and the CEO of Amazon Jeff Bezos through the help of Saudi Crown Prince Mohammed bin Salman – was founded by former staffers at Unit 8200.[7] [8]

In 2014, a number of soldiers seconded to Unit 8200 wrote an explosive letter to Israeli Prime Minister Benjamin Netanyahu saying they would not “…be tools to deepen the military regime in the occupied territories.”[9] An unprecedented 43 signatories expressed their unwillingness to serve their country in a way that unnecessarily negatively impacted on innocent Palestinian lives. The letter stated:

“There is a perception that service in military intelligence is free of moral dilemmas and only contributes to the reduction of violence and harm to innocent people… But during military service we learned that intelligence is an inseparable part of military control in the territories.”

“The Palestinian population is subject to military rule, completely exposed to espionage and to being tracked by Israeli intelligence… Contrary to Israeli citizens or citizens of other countries, there’s no oversight on methods of intelligence or tracking and the use of intelligence information against the Palestinians, regardless if they are connected to violence or not.” [9]

Kaplan is reportedly serving Starmer and the Labour Party leadership as a “social listening and organizing manager”, according to EI and its anonymous source pointing to a PDF copy of the job description.[10] The issue of Labour stifling remarks on the Zionist state of ‘Israel’ is only going to get worse.

Aside from the mainstream press, Corbyn has also been hounded by the top party brass, including Starmer, veteran Jewish MP Margaret Hodge, and various members of the opposition front bench. As has Ken Livingstone, the former two-term London mayor who was suspended in 2016 after a comment he made regarding the Nazi leader Adolf Hitler reportedly supporting Zionism.[11]

“They were producing a report to undermine the Labour Party.”

You can support Ken’s judicial review into the EHRC report here: https://t.co/7CIW47LGKY pic.twitter.com/69Wpg2m0s9

There appears to be no end in sight as Starmer continues his march towards eliminating any remnants of support for Palestine and the right to express views about ‘Israel’ that may not always toe the party line. The Labour Party continues to muddle up and muddy the waters on anti-Semitism and anti-Zionism.

Share. Facebook Twitter LinkedIn Email Telegram WhatsApp
Previous ArticleIsrael denies legal obligation to provide COVID vaccine to Palestinians in occupied territories
Next Article I Nearly Died From COVID-19 – This is What I Learnt