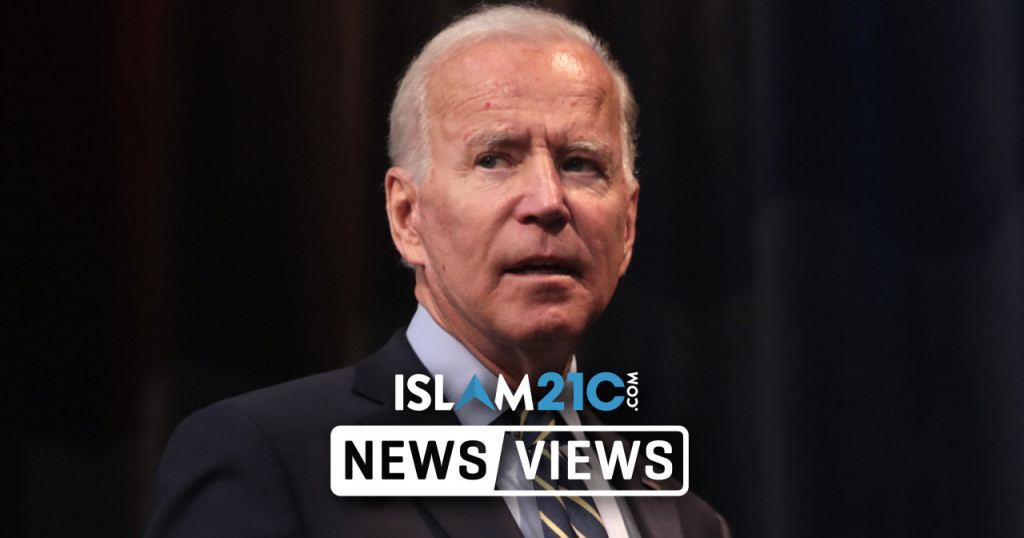 While the election of Joe Biden to the office of President of the United States was seen as a relief in restoring order to American politics, the façade appears to be slipping. On the international stage, Richard Gowan, the UN director overseeing the advocacy work undertaken by the organisation Crisis Group, suggests, “If the Biden administration had a honeymoon at the U.N., it’s over now.” [1]

Remarkably, the US has used its power of veto for the third time in a single week to prevent multiple UN Security Council statements that would have condemned the Zionist state of ‘Israel’ for its excessive and murderous acts surrounding the Al-Aqsa Mosque, as well as the Zionist state’s manufactured justification for launching an ongoing barrage of missiles on the besieged Gaza Strip. The withheld statements from the Security Council would have called for an urgent ceasefire to prevent further loss of life on both sides of the crisis. [2]

As seen by Politico, the statement calls for the “restraint, refraining from provocative actions and rhetoric, and upholding and respecting the historic status quo at the holy sites.” In addition, it also highlights the Security Council’s “serious concern over the possible evictions of Palestinian families in Sheikh Jarrah and Silwan neighborhoods in occupied East Jerusalem, many of whom have lived in their homes for generations.” [1]

Today is Eid, one of the most joyous days in the Muslim calendar.

While I'd rather be spending it with my family, I have an obligation to stand up for the families whose children were taken from them because of the violence in Palestine.

My remarks on the House Floor tonight pic.twitter.com/MSnNpuZuit

Whilst Biden himself has, to date, been somewhat muted in his Middle East diplomacy, it does not come as much of a surprise that America continues to defend its indefensible partner, ‘Israel’. The incumbent US ambassador to the UN, Linda Thomas-Greenfield, recently argued absurdly that BDS (boycott, divestment, and sanctions) “verges on antisemitism.” Moreover, on 27th January, while addressing her confirmation hearing at the Senate Foreign Relations Committee, Thomas-Greenfield expressed her desire to defend ‘Israel’ at the UN: “…if confirmed, I look forward to standing with Israel, standing against the unfair targeting of Israel”. [3] [4]

Due to the persistent blocking tactics of the US, many are arguing whether there has truly been any change in this particular foreign policy area. Biden, a lifelong Democrat, is evidently maintaining the status quo in backing ‘Israel’ on the world stage while the Zionist state sees immense opposition to its repeated incursions on Palestinians.

Last Thursday, Biden, responding to a reporter’s question on whether Israeli leader Benjamin Netanyahu is doing enough to prevent an escalation in violence, said, “One of the things that I have seen thus far is that there has not been a significant overreaction.” The question, however, must be asked: what, then, would be deemed a “significant overreaction”?

By emphasising rocket attacks – the implied message being those fired by Hamas into ‘Israel’ – Biden is making clear his stance on the issue. In focusing on the justified retaliation by Hamas to fire rockets when ‘Israel’ has already massacred close to 200 in its targeted airstrikes, including demolishing the regional offices of the Associated Press and Al Jazeera, Biden is brushing attention away from the Zionist government and attempting to blame the Palestinians. [6]

Representative Ilhan Omar of Minnesota’s 5th District released a blistering statement earlier today after the news that Biden and his administration approved an arms deal amounting to $735m worth of precision-guided missiles to ‘Israel’ whilst the ongoing oppression sees no sign of easing.

“The violence in Israel and the Gaza Strip is spiraling out of control. Far right ethnonationalist Israeli leader Benjamin Netanyahu is now responsible for at least 1,505 casualties in Gaza, including 200 deaths, 59 of them children. He has leveled entire residential buildings, targeting journalists and civilians alike in direct violation of international law.” [7]

The statement by Omar went further by calling out the complicity of America in these genocidal acts:

“And he is doing so with direct funding and military assistance from the United States of America … It would be appalling for the Biden Administration to go through with $735 million in precision-guided weaponry to Netanyahu without any strings attached in the wake of escalating violence and attacks on civilians.” [7]