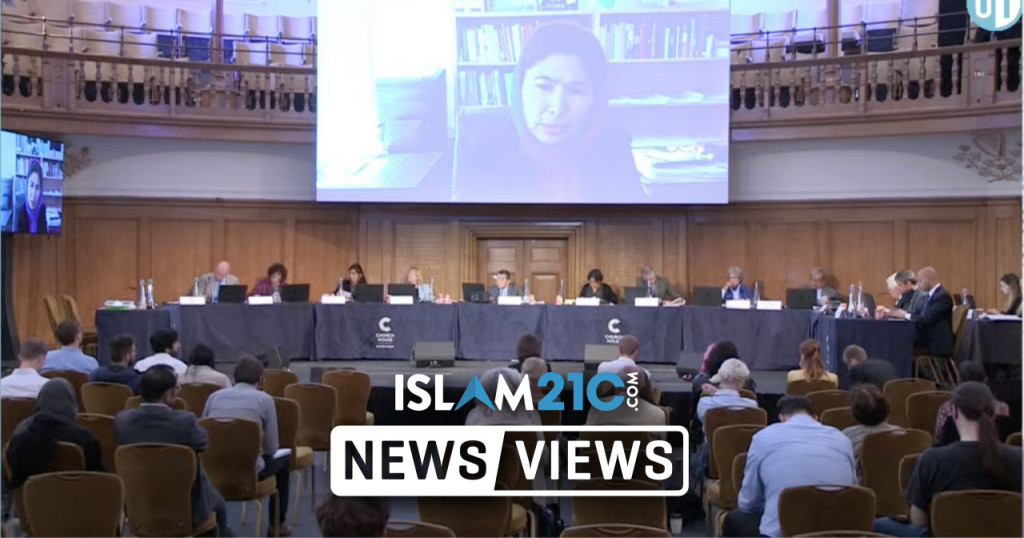 In order to follow the day’s events, organisers of the tribunal have set up a live stream, which can be viewed here

The groundbreaking people’s tribunal tasked with hearing harrowing expert evidence and testimony regarding an ongoing genocide has convened, with nine witness accounts already delivered during the Friday session. Survivors of the Chinese Communist Party’s (CCP) genocidal policies in the region of East Turkestan (what the CCP refers to as Xinjiang) have provided crucial witness testimony regarding the range of atrocities meted out by the regime.

Patigul Talip breaks down in tears as she gives evidence to the @TribunalUyghur, holding photos of her family she said: “both my son and my daughter I don’t know whether they are alive or dead.” pic.twitter.com/6dFP01NnIN

Qelbinur Sidik was the first of nine witnesses who testified in the tribunal’s opening session. Sidik is an ethnic Uzbek teacher from the city of Urumqi, and had formally worked for 28 years at the local 24th Primary School. In her detailed account, she described how one day in September 2016, an evaluation of all teachers in her city and other regions of East Turkestan was conducted by state officials. The evaluation was purportedly a proficiency assessment in the Chinese language, and officials indicated that Sidik would be transferred to another educational facility. Upon arrival at her new location, however, she realised that she had actually been taken to a concentration camp. [1]

She further noted to the Tribunal that the facility at first glance clearly appeared to be a detention site. Her suspicions were confirmed inside the centre, after she observed one of the female staff members opening no less than three locked doors – one with an electronic keypad, another with a regular padlock, and a third intertwined with wires – to access the “teaching” area.

Sidik also recalled in her testimony the first encounter she had with other Muslim prisoners, often referred to as Xueyuanban:

“The girl came in and shouted, ‘Class has started, class has started,’ shouting and opening the door of each cell. The cells locked with chains were opened. I saw them coming out. When I looked at them as they came out, I noticed that they were older adults with chains on their hands and feet. I burst into tears every time I give a testimony about them.” [1]

Just two weeks after her 50th birthday, on 20 May 2019 the veteran teacher was forcibly sterilised in a government hospital. Sidik recalls how on that fateful day she was coerced into attending a hospital appointment for compulsory sterilisation. She recalled her absolute shock at this proposition, even going as far as telling a staff member: “Dear sister, what are you talking about? I have just turned 50. I am willing to meet any other requirements, but I cannot do this one.” Out of fear for her safety, she eventually went to the clinic and the procedure was performed. [1] [2]

The so-called “Ethnic Unity Month” programme championed by the CCP was also noted by Sidik. She observed that during each May, there was an initiative implemented by the government to “carry out some activities to show that they (Uyghurs and ethnic Chinese) are united.” She explained how in her household, a senior-ranking Chinese man from her husband’s workplace was assigned the status of “relative” and would visit and live with them for a period of time. During his stay, he would drink alcohol and even encouraged Sidik’s husband to do so as well.

“When that Chinese person came to me and said, ‘let us now sleep,’ I told him I would sleep later as I could not stand the smell of alcohol. Sometimes he demanded that I drink with them. I told him I will just toast with them. I allow him to do whatever he wants to do with me, yet with disgust. I pray silently and say, ‘Oh my God, do you see this? Please get rid of this beast.’” [1]

Sidik went further in her extensive first-hand testimony by documenting her honest and tragic discussions with fellow Turkic women. Many of these women stated that they had been sexually assaulted by male police officers and guards at the detention site, the same centre where she was supposedly sent to “teach” in but in reality was one of numerous “re-education” centres.

1st witness is Qelbinur Sidik, who was forced to teach in the internment camps:

People in the camps weren’t treated as humans, but shackled & called by the numbers on their jackets. When women were interrogated, they were also (gang)raped & injections stopped their menstruation.

“… we asked them if they had been raped, and most of them started crying. ‘How do they rape? I guess you guys know a lot more than I do’, I asked. ‘You really do not want to know’, she replied. ‘I do actually. I have been hearing a lot lately, and really want to confirm it with you to see if everything they have been saying is true or not’, I asked.” [1]

One imprisoned woman eventually opened up to Sidik and gave the following account:

“What is not to believe about these rumors? There is a reason male police officers would beg to come to this camp since there are more pretty girls here. They take girls into the investigation rooms where there are no cameras, and 4-5 police officers take turns raping a girl, one after another. After raping her, they take electric rods and stick it inside their vagina and rectum to torture them, and rape them again afterwards.” [1]

During the Friday session, further accounts were provided by Asiye Abdulahed, an icon of the Uyghur people who leaked documentary evidence of the presence of detention camps in 2019; Sean Roberts, author of the book The War on the Uyghurs: China’s Campaign Against Xinjiang’s Muslims; Dolkun Isa, President of the World Uyghur Congress; Sayragul Sawutbay, a teacher who has had experiences with the Chinese state in a similar fashion to Qelbinur Sedik; Patigul Talip, whose extended family and husband in particular have suffered terribly at the hands of police and officials; Muetter Illiqud, a member of the Uyghur Transitional Justice Database, a Norway-based project that records the names of Uyghur people who have disappeared or have been arbitrarily detained in East Turkestan; Abduweli Ayup, a renowned linguist who lives in Norway and encourages the study of the Uyghur language; and lastly, Omir Bekali, a former Uyghur detainee of the Chinese state. [3] [4] [5] [6] [7] [8] [9] [10]

On Saturday, further statements will be heard by the panel of legal experts, and by the 7th of June, the first round of oral statements will conclude. For the coming days, the people’s tribunal continues to hear from experts and survivors alike. By the will of Allah, it will be an immense tool in the pursuit of justice for victims of China’s relentless genocidal actions towards the Turkic Muslim minority population in East Turkestan.

“I am already dead, I don’t care what happens to me. I just live to stop this injustice happening to anyone else.” #Uyghur concentration camp survivor who was gang-raped and had her uterus forcibly removed by #China is giving testimony at the @TribunalUyghur on #UyghurGenocide pic.twitter.com/pAaTRxEaXr

I was beaten even more severely when I cried “O Allah”, the torturers mocked and said whilse beating me: “Go and find your God”

A testimony from a concentration camp survivor at the #UyghurTribunal. pic.twitter.com/ovS97SV5j3

“She was forced to take injections…a few hours later, her dead baby was extracted from her womb.”

A #Uyghur sister who underwent a forced abortion like many others. Her other children are being held in concentration camps at the moment.#uyghurtribunal #UyghurGenocide pic.twitter.com/5okRPcThc1

Q: "How many forced abortions took place in a week?"

A: "(estimate) weekly 20-30 abortions in the hospital I worked in, including those born alive and killed by injection. Sometimes born alive, left the hospital, then police go and search their houses and apply punishments." pic.twitter.com/OvEzOe6RnR

“Don’t you have a mother or sister?”
A grandmother as a #China concentration camp guard tried to rape her. He became angry & tortured her by electrocution, shouting
“How dare you compare yourself to my mother & sister! You are an animal!” #Dehumanisation #UyghurTribunal #Uyghur

"I cried so much that my eyesight deteriorated."

Such a shame on the world watching as #China oppresses the innocent Uyghurs#UyghurTribunal#UyghurGenocide pic.twitter.com/K0qPeGoJs8

“They tied her hands & ankles together so she was bowing and had to crawl. Eventually she was beaten to death. Her name is Hurriyet.”

Let not her name be forgotten. It means Freedom