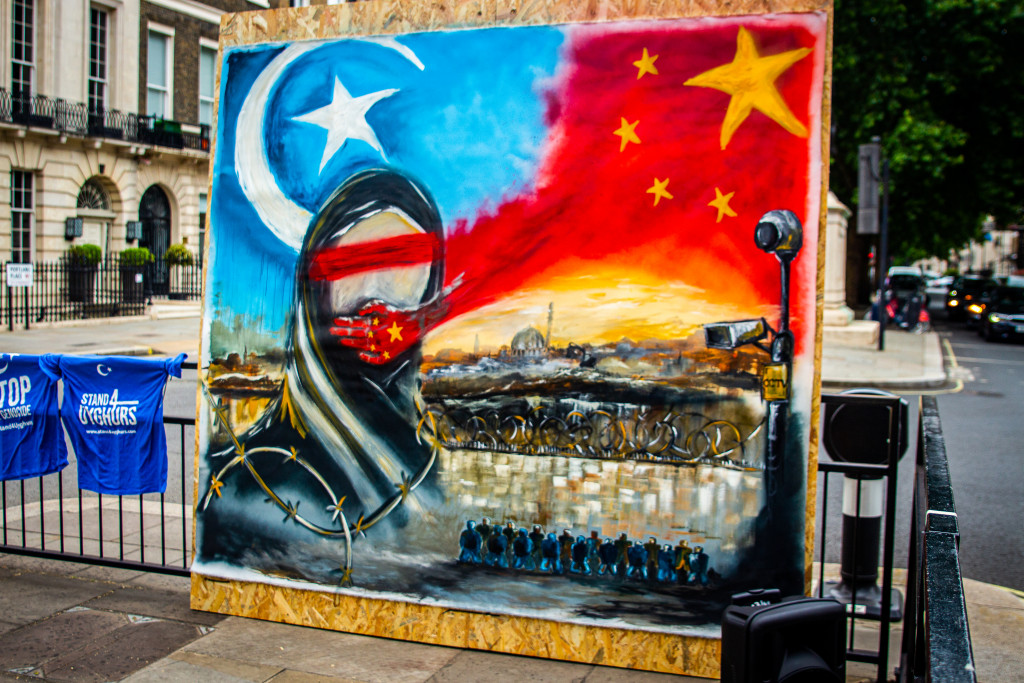 Members of the Stand4Uyghurs coalition gathered outside the Chinese Embassy in London on the 5th July 2022 commemorating 13 years since the Urumchi massacre with a live art spectacle depicting the crimes of the Chinese government against Uyghur Muslims in occupied East Turkestan.

Acclaimed artist Shams arrived early in the day outside the Chinese embassy in London where he began his painting using only spray paint and light brush work. His art work encapsulated the various atrocities being carreid out by the draconian Chinese Communist Party such as the administration of concentration camps, forced labour, state surveillance, religious suppression and murder. The striking and captivating artwork could be seen from afar by pedestrians and drivers.

Coalition members from various grass root Muslim organisations came down to show their solidarity including the Muslim Association of Britain, CAGE, MPACUK, 5 Pillars, Lighthouse Advocacy, Sapience Institute, and the Islamic Council of Europe. The following statements were made from representatives of the respective organisations:

“Nazi Germany has been metamorphosised into the CCP, there is an ethno-religious genocide of our Uyghur brothers and sisters in Occupation in East Turkistan. We need to realise and have this empathy not only as Muslims but human beings to stop this aggression, and stop this genocide.”

Tzortzis had a strong message for the CCP.

“This piece of art is a beautiful and profound way to demonstrate what is happening to our brothers and sisters in East Turkestan. I was so impressed because we are taking the Dawah to another level, now Muslims in the UK are politically active and now they are using art to communicate their messages. We have neglected using art for a long time, although our Prophet ﷺ used art in many occasions… we all know the journey is quite a long journey because we are standing against one of the most oppressive superpowers in the world… it is a long term journey but we are ready for that because we believe it is an act of Ibadah.”

“SubhanAllah the death toll is unknown, we just keep guessing the number of people who died there including scholars who were tortured to death, including the first man to translate the Quran into the Uyghur language. We have to continue to demonstrate and say no to the injustice and oppression taking place over there. We have to understand this Chinese regime has badly failed to understand the nature of this Ummah of Islam that never gives up. They have failed to understand that it’s an obligation in Islam not to accept injustice whether it happens to yourself or anyone else… it is One Ummah that says ‘La ilaha illa-Allah Muhammadun rasul Allah’. We will never stop our solidarity with our brothers and sisters in East Turkestan”.

“We have the will among the political elite in the UK to scapegoat Muslims and to use Islamophobia for their own failings. If you do not want your children to face what the Uyghurs are facing then you must stop it while it is over there… There was a fantastic report by ‘Prevent Watch’ which broke down the reality of Prevent as inherently Islamophobic and harmful for children. How did the UK government respond? A think tank wrote a report endorsed by David Cameron that said Muslim organisations like those here today and Muslim individuals like you and me should be lumped together with violent terrorists and vilified and silenced. Why am I talking so much about Prevent and counter extremism and terrorism? Because that is exactly how the Chinese government is justifying what they are doing to our follow Muslims—using the framework of countering so-called extremism.”

A pertinent message shared by all speakers was to call the community out on the 31st July to stand in solidarity with their Uyghur brothers and sisters.

The struggle is not over and our fight does not end here today, join us in a global act of solidarity on the 31st July outside the Chinese embassy and consulates in London, Manchester and Edinburgh where we will be chanting our demands to end China’s repressive policies in occupied East Turkestan. International activity will be taking place in Toronto, Washington DC, Istanbul, Sydney, Melbourne, and Brisbane Insh’Allah. Join the movement and #Stand4Uyghurs.