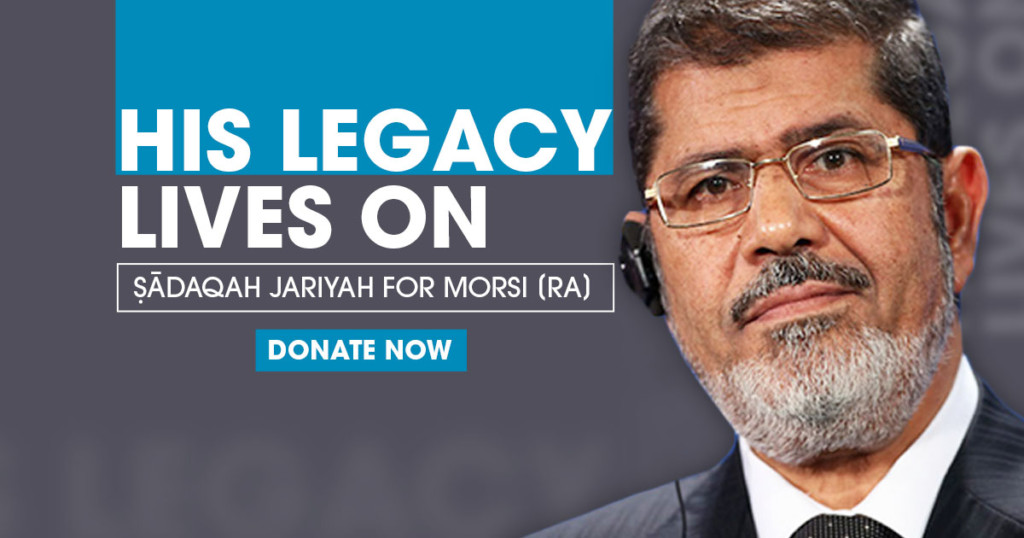 As people of conscience around the world, it is time we express our indebtedness to Egypt’s first and last democratically elected president in Egypt’s known history, Dr Mohamed Morsi.

President Morsi was deposed by the Egyptian military in July 2013 amidst a crackdown that has claimed the lives of thousands and incarcerated masses. These are icons of struggle and daʿwah to Allāh (subḥānahu wa taʿālā).

During a ‘court’ hearing on the 17th of June 2019, President Mohamed Morsi collapsed and returned to his Lord. The six-year-long trial swung between jail and death sentences whilst Morsi stood defiant, upright, and smart behind a glass window, but never conceding his position as Egypt’s highest authority.

No media coverage of the funeral processions was permitted by the coup regime, as has been the case with the hundreds of others killed in similar circumstances; nor were any of his supporters allowed to participate. Dr Morsi was buried in Nasr City, in precisely the same burial ground as three former General Guides to the Muslim Brotherhood, including the previous General Guide, Mohamad Mahdi, who also died in detention (raḥimahum Allāhu).

“I will not leave prison before my detained sons. Nor will I enter my home before my sanctified daughters. My life is not more valuable than that of the righteous martyrs of the revolution. I draw my determination from the determination of our youth…” 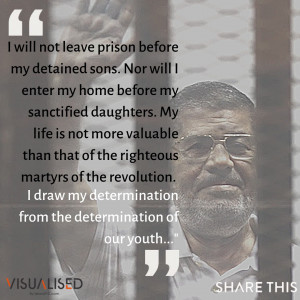 Ongoing Sadaqah dedicated to the Champions of Justice

Through this small initiative, we at Islam21c want to show that inhibiting physical expressions of grief and procession will not prevent the world from taking action. We are responding through what will benefit him in the hereafter and attend to the pains of his grieving family.

Through the earnest support of the advocates of truth and justice around the world, we hope to exceed our target!

We are asking the people of conscience throughout the world to honour his word. A page has been set up to raise funds as a token of our gratitude for him. Whilst he spent up to 23 hours in solitary confinement and horrifying conditions, today we want to send him charity that will illuminate their graves and transform them into unending expanses of bliss and delight.

The money will go towards setting up endowments (ongoing charities) known as ‘Sadaqah Jāriyah’, benefiting the most impoverished around the globe.

This is the least we can do, and we humbly ask all organisations to spread the word and to unite on this noble cause of justice.

Please support this cause! May Allāh (subḥānahu wa taʿālā) have mercy on President Mohamed Morsi and accept him as a martyr, granting him the highest abode in Jannat al-Firdous. Āmin.

Where will your Money go?

The money will go towards setting up endowments (ongoing charities) known as ‘Sadaqah Jāriyah’, benefiting the most impoverished In Gaza. This is the least we can do and we humbly ask all organisations to spread the word and to unite on this noble cause of justice.

Water for Life in Gaza

We have chosen a ‘Gaza Water fund’. With your help we want to build at least 1 desalination plant and three wells in Rafah, providing safe drinking water for tens of thousands of people. Despite the devastation caused by the bombing of homes schools and hospitals, the leading cause of children’s deaths in Gaza is contaminated water.

The entire population of the Gaza Strip depends on one single aquifer for water, which is chronically contaminated by saltwater and sewage. A staggering 97% of water in Gaza is undrinkable and contaminated.

We are aiming to build at least one permanent desalination plant  but with your help, aspire to build more.

Despite the logistical challenges, the construction of the well is more than worth it. Local disadvantaged communities will have a permanent source of clean, safe water.

The “mega well” will serve up to 60,000 people on an ongoing basis. The beauty of water projects such as this is that they provide a permanent solution, and the investment can represent significant differences in quality of life for generations to come, as well as a continuous reward for those who have gone.

If human rights are deprived, let us help provide them for others, on behalf of those it was deprived from.

Allāh (subḥānahu wa taʿālā)’s mercy be on those who were killed for the causes of justice.