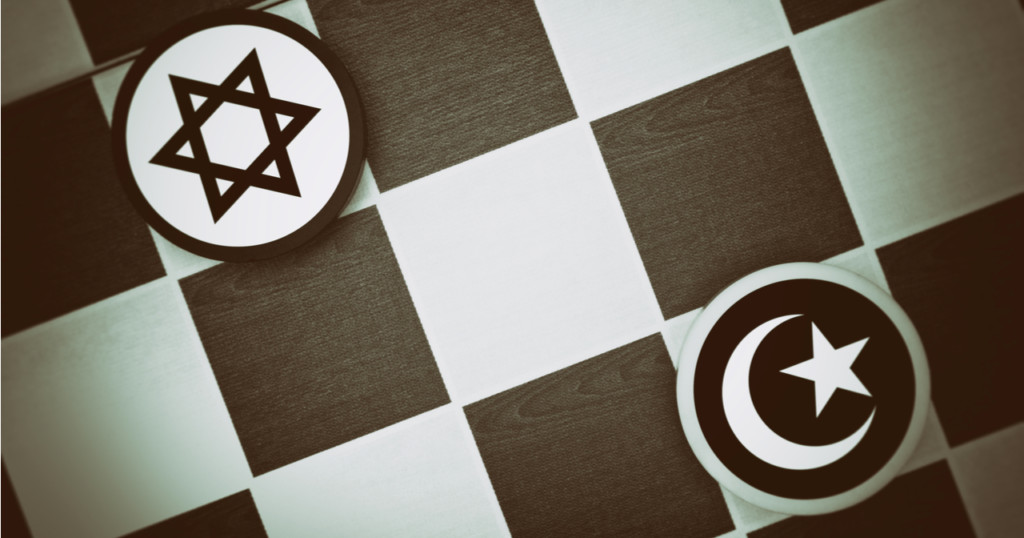 There is no easy way to maul ‘Israel’ these days without facing the mincer. It should have been more straightforward. The Muslims got ‘ISIS’. It clearly was not a depiction of normative Islām and I trust nobody will call you an Islamophobe for slamming them. Likewise, it is not anti-Christian bigotry to condemn the Nazis.

Why is it different for Zionism? Is the amalgamation of anti-Semitism and anti-Zionism, in a way that leverages the legal privileges of the former on the latter, really helpful? In other words, should ‘Israel’, as a political entity, be given Semitic immunity or instead, earn the repudiation of the world’s Semitic community?

Let us take this piecemeal. Zionists, regardless of their religious persuasions, have by incontestable fact invaded Palestine. Putting aside the ‘promised land’ claim for just a moment, the ‘Israeli Declaration of Independence’ happened in May 1948, which is recent enough to be remembered.

Around one million native humans (regardless of their genetic composition) were forcibly displaced from their homes. Call them ‘Palestinians’, ‘Arabs’, ‘human beings’, ‘Canaanites’, ‘Jebusites’, ‘Philistine’s, or even ‘the biological synthesis of every dynasty, nation, or peoples (including ‘Semitic’ Israelites) for all intents and purposes. There were humans living there before the advent of ‘Israel.’ More than 78% of their land was confiscated, alongside its water resource, livestock, buildings, and fertile earth that later became the graveyard of those victims.

“How can we return the occupied territories? There is nobody to return them to.” [1]

What became known as ‘Israel’, created on the corps of that synthetic religious community, also became the world’s only nation given the privilege of justifying its invasion…religiously. They became ‘God’s chosen people’ for that land – a theatrical diversion of the real question. But who could argue with ‘God’s choice’? Precipitously, what began as a simple issue of the rightness or wrongness of land annexation became confounded with questions of organic originality…

The onus was not on how predominantly European Zionists forged a biological link with an African Moses or Babylonian Abraham for that matter. In fact, the onus of answering for genetic originality was thrown on the masses who lived there before 1948 since time immemorial.

Fast forwarding to the modern day, 46% of ‘Israeli’ Jews consider themselves secular, whilst 70% see themselves as God’s ‘chosen people.’ [2] Do the maths! The rounded claim is that God distinguished a growing godless community and sanctioned the forced displacement of a vastly religious and notably Abrahamic community.

Zionism’s history is blighted with massacres, the scale and recursive nature of which has become unfathomable. This says a lot about a 70-year-old nation state. During the shaping of Zionism under the auspices of the British Empire, dozens of British servicemen were killed. The 22nd July 1946 attack on the King David Hotel containing the British Administrative Headquarters was carried out by Zionist underground organisation the ‘Irgun’. Its directors became some of the most senior Zionist authorities, including Menachem Begin (the sixth Prime Minister of ‘Israel’).

The Deir Yassin massacre followed in 1948. A join contingent, containing the Tsel, Irgun, and Haganah, assaulted the 600-person village near Jerusalem. A cistern alone was found to contain 150 mutilating bodies and the full death toll remains unknown. Irgun leader Menachem Begin falsified the Red Cross’s reports, ironically labelling it the fabrication by anti-Semites. [3] Massacres at Qibya followed in 1953, then Khan Yunis in 1956, and then in the scarred Lebanese town of Sabra and Shatila, in which the organised ‘Israeli’ army itself supervised the silent mass execution of thousands of unarmed Palestinians over three consecutive days.

In the year 1990, thousands of settlers stormed the Masjid al-Aqsa compound trying to place a rock that was ostensibly a foundation stone for Solomon’s temple. Thousands of Palestinians assembled to ward off the group and were met with live ‘Israeli’ gunfire. More than 20 Palestinians were shot dead and hundreds fell injured. [4] Pools of blood on the sanctuary spread to almost 200 metres in length.

“Force is all they do or ever will understand. We shall use the ultimate force until the Palestinians come crawling to us on all fours.” [5]

In February 1994, Baroukh Goldstein opened fire on a congregation of worshippers at the Masjid in Hebron in which Prophet Abraham (ʿalayhi al-Salām) is buried. The worshippers, face down in sujūd (prostration), were peppered with bullets. Soldiers stationed outside failed to intervene for 10 traumatic minutes despite calls for help. The Zionist fanatic could not have been speaking for Semitism:

“And Abram fell on his face: and God talked with him, saying, as for me, behold, my covenant is with thee, and thou shalt be a father of many nations.” [6]

The 2006 blitz on Lebanon that claimed more than a thousand civilians – followed by that on Gaza in 2008, 2012, and 2014 and claiming some 4000 civilians – further testify to this. Mere ‘occupation’ would have been unnecessary, according to the former ‘Israeli’ Defence Minister Avigdor Lieberman, and a false protagonist of ‘Israel’s’ Jewishness, if had it dealt with its resistance as the US dealt with Japan. [7]

Censoring ‘Israel’ does not need to be embraced within the definition of anti-Semitism. It is a disservice to a law and concept that took decades of struggle to enshrine across the world. Put another way, if Zionism, sits ‘above the law’, it does not need to sit within the precincts of legal protection afforded to Semitism. Insisting on the equivalence of political Zionism and religious Semitism, in fact, denounces international law altogether, otherwise it is a legal paradox. In fact, religion is unequivocal to separating religious doctrine from the usages and applications of man, and the Zionism and Semitism equivalence renounces this basic concept.

Surely, “grave breaches to which the preceding Article relates shall be those involving any of the following acts, if committed against persons or property protected by the present Convention: wilful killing, torture or inhuman treatment, including biological experiments, wilfully causing great suffering or serious injury to body or health, unlawful deportation or transfer or unlawful confinement of a protected person”, as stated in Article 147 of the 1949 Geneva convention, [8] is not a Semitic virtue. Can ‘Israel’s’ proponents honestly vindicate ‘Israel’ from this? Reports suggest that women raising white flags were summarily executed during ‘Operation Cast Lead’. [9] The use of insidious white phosphorus and depleted uranium during the December 2008 assault on Gaza was at an unprecedented scale.

According to Article 27 of the 1949 Geneva Convention:

“Women shall be especially protected against any attack on their honour, in particular against rape.”

Should the choke imposed on the Gaza strip be afforded legal protection?

“Daily food rations for internees shall be sufficient in quantity, quality and variety to keep internees in a good state of health and prevent the development of nutritional deficiencies. Account shall also be taken of the customary diet of the internees.” [10]

Recurrent sexual abuse, child molestation, prisoner humiliation, and physical and psychological abuse has been extensively documented by Palestinian non-governmental advocacy group, Addameer. [12] According to the Palestinian Centre of Human Rights, ‘Israel’ has imprisoned more than 600,000 Palestinians for a week or longer. [13] Reports suggest that prisoners are tied to chairs for hours, with music blasting out, pricked with needles and sacks are placed over their heads. However, according to Declaration of the Basic Principles of Justice for Victims of Crime and Abuse of Power:

“Victims should be treated with compassion and respect for their dignity and are entitled to prompt redress for harm caused.” [14]

Affording Zionism legal immunity under the Semitic framework undermines our very understanding of Human Rights and justice. ‘Israel’ leads the world in snubbing UN resolutions. [15] It is a glaring legal enigma, even a travesty of justice to outlaw the Boycott Divestment and Sanctions (BDS) movement, specifically targeting illegal settlement produce, when, according to the International Court of Justice (2004) “Israeli settlements in the Occupied Palestinian Territory, including East Jerusalem, are illegal and an obstacle to peace and to economic and social development [… and] have been established in breach of international law”. [16]

Racism is grounded in almost every ‘Israeli’ institution. Arabs living within the 1948 territories are fundamentally denied nationality rights. The Law of Citizenship isolates non-Jews into a subordinate class and a wide range of national services are systematically provided to Zionist institutions, serving only Jews. [17] ‘Israeli’ Arabs are ridiculed at airports, suspended from various legislative and legal rights, and even banned from access to public amenities, including parks and attractions. [18]

“One million Arabs are not worth a Jewish fingernail.” [19]

In the 16 years of building the ‘separation wall’, the structure has penetrated up to 67 Palestinian villages, towns, and cities, affecting nearly quarter of a million Palestinians living in the West Bank. “Jerusalemites are separated from family members in the West Bank; ambulances and patients cannot reach hospitals; and babies are born in the street.” [20]

Arguably, conflating anti-Semitism with anti-Zionism is anti-Semitic, particularly if we can agree that anti-Semitism is distinctly racist and has bred hate-crime. Trying to protect ‘Israel’ under the precincts of ‘anti-Semitism’ laws in fact undermine the latter, exposing the two separate issues to equivalent denigration. People will simply not stop criticising ‘Israel’ because it stems from their disposition on moral justice. Just as Islamophobes should answer for today’s record levels of Islamophobic hate-crime because their equivalence of terrorism and Islām, those who peddle the Zionism, Semitism equivalence should be the ones made to answer for increasing anti-Jewish bigotry.

[5] Rafael Eitan, Chief of Staff of the Israeli Defence Forces, 1983

[11] Declaration against Torture and other Cruel, Inhuman or Degrading Treatment or Punishment