Condolences and Reflections on the passing of Junaid Jamshed 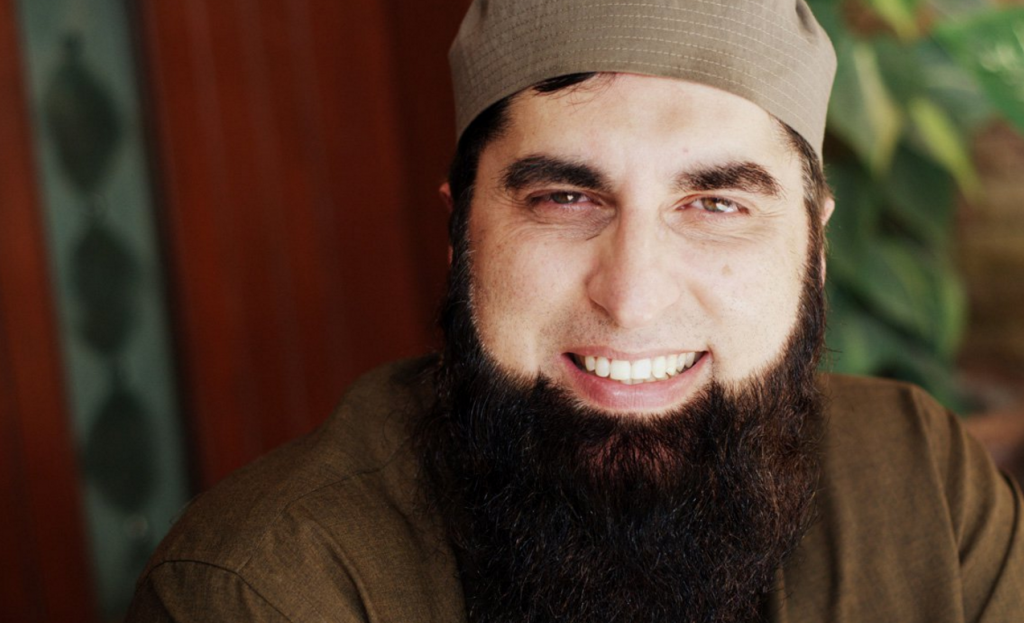 In the early hours of Wednesday 8th December 2016, corresponding to the 8th  Rabi al-Awwal 1438, the Islamabad-bound Pakistan International Airlines (PIA) flight PK-661 crashed in the Havelian area, 70km north of Islamabad. All 48 people on board were killed. The world was soon to learn that the prominent Dā’ī and distinguished Munshid, Junaid Jamshed, and his wife were among those on board. Inna lillāhi wa ina ilayhi rājiʿūn.

For those who grew up in the 1990’s, Junaid Jamshed’s name was synonymous with the band Vital Signs. Identifiable by his good looks, beautiful voice and stage presence, Junaid Jamshed was its lead member and the face of their success. He was the voice of his generation, the artist of record-breaking songs such as Dil Dil Pakistan and Tum Mil Gaye and he headed the first Pakistani Music band to tour America and much of the world.

As time passed, however, Jamshed drifted away from the musical world and began to reflect and ponder over the real purpose of his existence. This, coupled with his increase in reading about and practising of his religion, led to an eventually dramatic change from a life of rock and roll to a lifestyle according to his real purpose.

Many details of Jamshed’s life can be researched in great detail online and his many beautifully inspiring talks and nashīds can be listened to. His passing is one of great sadness and we ask Allāh (subḥānahu wa taʿālā) to shower him and those who died with him on that fateful plane journey with abundant mercy and enter them all in the highest levels of Jannah. This sad moment, however, allows us to reflect on the many lessons we can learn from this inspired individual.

Jamshed lived much of his life in the public eye, with his every move seemingly worthy of a headline. However, his resolve and conviction to change his lifestyle entirely, fearless of the potential scrutiny and mocking that he would have been subjected to, is a lesson for us all. If the desire to rectify ourselves and become obedient slaves of Allāh (subḥānahu wa taʿālā) burns strong enough inside us then this is something we can achieve regardless of the perceived obstacles. A close friend even took to the media to criticise Jamshed’s newly found vigour to practice his religion, saying,

“…I felt that a confused man like Junaid had no right to confuse thousands of his youthful followers. I had given him sixteen years of my life as a true friend and had played my role in his professional life to the best of my abilities. How could he throw away our sixteen years just like that without even consulting me? I feel that it was my duty to rectify the damage he has done to the already suffering society under the influence of fundamentalists…”1[2]

Such rhetoric never dissuaded Jamshed from striving to serve the Dīn of Allāh (subḥānahu wa taʿālā) but, rather, inspired him to numerous great deeds.

Jamshed’s wisdom in utilising his talents for the sake of propagating his religion is something that benefitted many. His nashīds are popular worldwide and many are moved by his very touching and spiritual lyrics. Rather than rendering his beautiful voice redundant once he began practicing, Jamshed used his talents to spread Islām as far and wide as he could. The same talent that he misused in his younger years was harnessed and channelled to invite many towards Islām and motivate his fellow believers. Instead of opting to seclude himself and distance himself from the public eye, Jamshed used his influence and talents to inspire many Muslims of all ages. It was a truly remarkable change and his parting condition.

“When Allāh wants good for a slave, He puts him in action.” It was said: “How does he put him in action O Messenger of Allāh?” He said: “By making him meet up with the righteous deeds before death.”[3]

As Muslims we learn from Jamshed that using the many talents that Allāh (subḥānahu wa taʿālā) has blessed us with in His way is the real expression of gratitude for those gifts. Expression of our gratitude to Allāh (subḥānahu wa taʿālā) for the many blessings he has bestowed upon us is not only through feeling it in our hearts and expressing it on our tongues but by manifesting that Shukr with our limbs through acts of obedience and submission to Allāh the Almighty and Supreme.

Junaid Jamshed’s passing leaves many of us with great sadness. However, his life has left us with many poignant and heart-moving lessons. His life reminds us that if we are sincere in our resolve to become better worshippers of Allāh (subḥānahu wa taʿālā) we will never be too far away from being truly guided towards the right path. His desire to be guided and to guide others is a Prophetic trait which we should all seek to emulate. His charity work helped millions of impoverished believers and he strove to alleviate their suffering.

O Allāh, forgive him and have mercy upon him, excuse him and pardon him, and make honourable his reception. Expand his entry, and cleanse him with water, snow, and ice, and purify him of sin as a white robe is purified of filth. Exchange his home for a better home, and his family for a better family, and his spouse for a better spouse. Admit him into the Garden, protect him from the punishment of the grave and the torment of the Fire.

[2] ‘How one of Pakistan’s greatest pop icons started a new life as an Islamic entrepreneur’, on Stagecraft Magazine, Published 1 Aug 2012, Retrieved 30 May 2016