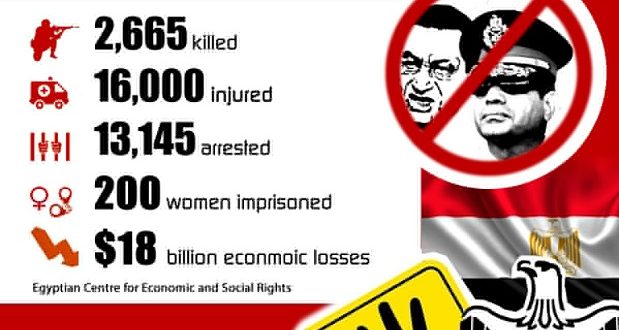 Reclaiming our Revolution – March for Egypt

Since the ousting of President Mursi on July 3rd, the military have continued in their atrocious crimes against humanity with human rights violations, mass killings, arbitrary arrests and torture. Thousands of peaceful civilians have been killed and arrested, merely for expressing their rejection of the coup and calling for the reinstating of democracy in their country.

Everything 25 January stood for is being threatened with the military dictatorship throwing Egypt back decades. We call for your attendance in response to the ongoing bloodshed in Egypt, the repression of their freedoms, the clear theft of our revolution by the deep state and ask you to join us in speaking out against the atrocities being committed and in restoring the people’s mandate and legitimate right.

Sheikh Haitham al-Haddad and Sheikh Abu Ahmed have both actively encouraged everyone to attend and join the protest. A special video message follows;

Join the rally this Saturday 25th January 2014, the third anniversary to the great Egyptian Revolution that inspired the world, in a march for freedom, dignity and social justice. The march is expected to start from Downing Street to the Egyptian Embassy, for up to date notifications visit, like and share the following facebook page here

Coaches are being arranged from the following cities. Contact the number of your city to book your seat. Further cities to be confirmed.

2014-01-24
+Editor
Previous: [al-Taḥawiyyah Pt 27] Belief in the Blessed Prophet
Next: Maqra’ah of the book of ḥadīth: al Aḥādīth al Mukhtārah