Rain – A Summary of Key Islamic Manners and Rulings Part 1 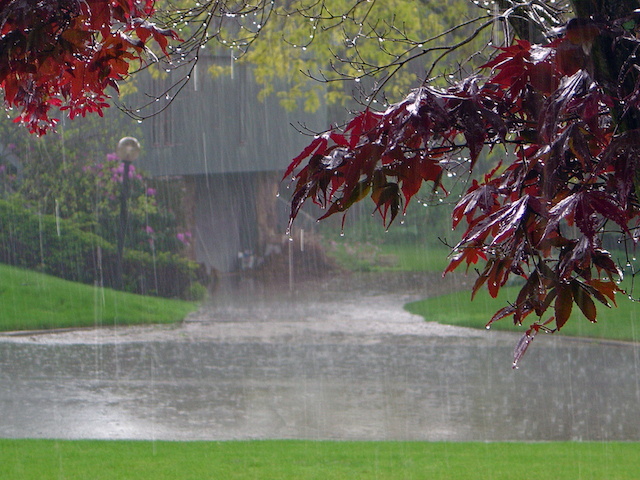 As the rain pours down, let’s take the opportunity to reflect on how Islām teaches us to interact with this great blessing. Islām should guide us in all of our affairs, so it is no surprise that there is a rich Islamic heritage of discussion and opinion in all areas where rain affects our worship and living. What follows is a reminder of some key manners and rulings mentioned by Muslim scholars about rain.

Part One: Rain as a Blessing

When we understand that all life is made from water, it should make us realize the importance of rain too. As Allāh, the Most High says: “And We made from water every living thing. Then will they not believe?”[1]

Without rain, there would be no life on earth. Through the water cycle, the water descending from the sky maintains life. As Allāh, the Most High reminds us: “And in the water which Allāh sends down from the sky and thereby gives life to the earth after its death.” [2]

The benefits of this rain are not limited to the land given life, but ultimately this also becomes sustenance for us in the form of agriculture and livestock. Allāh the Most High, reminds us: “And he has sent down water from the sky to bring forth fruits for your provision.”[3]

Allāh has even made this water pure for us so we can use it to fulfil our responsibilities to Him. As Allāh the Most High says: “And He sent down rain from the skies to cleanse you.”[4]

Of course, there are other benefits of rain, like how Allāh has made it descend from above, so that it irrigates naturally and effectively across vast areas of land. All of this for free and no return.

Once we reflect upon these benefits, we will recognize that it is Allāh that has given us these blessings and no one else. This recognition should drive us to thank Him and worship Him with deeper love and awe. As the Prophet (Ṣallāhu ‘alayhi wa salam) explained to his companions when they had a night of heavy rain: “Do you know what your Lord has said?” They replied: “Allāh and His Messenger know better.” Upon this he (Ṣallāhu ‘alayhi wa salam) remarked, “He has said: ‘Some of My slaves have entered the morning as my believers and some as unbelievers. He who said: We have had a rainfall due to the Grace and Mercy of Allāh, believes in Me and disbelieves in the stars; and he who said: We have had a rainfall due to the rising of such and such star, disbelieves in Me and affirms his faith in the stars.”‘[5]

Here the Prophet (Ṣallāhu ‘alayhi wa salam) was teaching his companions to attribute the blessings of rain to Allāh and no one else. We should therefore recognise the real provider of this rain, and strive to do further good deeds and show our gratefulness for the favours that Allāh has bestowed upon us.

Part Two: Rain as a Punishment

In general, rain is a blessing but Allāh the Most High has also used rain to punish nations who chose to disobey His commands. These stories are mentioned in the Qur’ān, whereby the people of Nūḥ,[6] Lūṭ,[7] and `Ād[8] were all destroyed by different forms of rain. Hence, this should be a reminder for us too. If Allāh punished them for their sins, then there is no guarantee that we are safe from his wrath either. This is why the Prophet (Ṣallāhu ‘alayhi wa salam) would be weary when he saw dark clouds in the sky.

Once the Prophet (Ṣallāhu ‘alayhi wa salam) saw a cloud gathering above, so this became visible on his face and he became concerned.  `Ā’ishah (RaḍiAllāhu ‘anha) said “O Messenger of Allāh, I see that when the people see a cloud they are happy, because they hope it will bring rain, but I see that when you see a cloud, it is clear from your face that you do not like it.” He (Ṣallāhu ‘alayhi wa salam) replied, “O `Ā’ishah, how can I be sure that there is no punishment in it, for some people were punished by the wind, and some people saw their punishment but said, ‘This is a cloud bringing us rain!’[9]

The Messenger of Allāh (Ṣallāhu ‘alayhi wa salam) was referring to the people of `Ād as mentioned in the following verse: “And when they saw it as a cloud approaching their valleys, they said, “This is a cloud bringing us rain!” Rather, it is that for which you were impatient: a wind containing a painful punishment.”[10]

The above narration teaches us that rain is a blessing but should also act as a reminder of what happened to previous nations that chose to disobey the commands of Allāh. This should make us reflect on our deeds and assess if we are repeating the sins of nations before us.

The best of examples and a guide for mankind, the Messenger of Allāh (Ṣallāhu ‘alayhi wa salam) performed various actions during times of rain that are now a precedent for us to follow and imitate. Some of these recommended actions are opportunities to increase in reward, so we should be keen to apply them when possible.

To supplicate for the rain to be beneficial

As mentioned, Allāh can send rain for different reasons. Hence the Prophet (Ṣallāhu ‘alayhi wa salam) would supplicate to Allāh to provide rainfall that was beneficial and brought mercy. `Ā’ishah (RaḍiAllāhu ‘anha) relates that when the Prophet  (Ṣallāhu ‘alayhi wa salam) would see clouds gathering in the sky’s horizon, he would leave what he was doing even if in prayer and say: “Oh Allāh! I seek refuge in you from its evils.” [11]

If it is feared that the rain will bring harm, then it is sunnah (recommended) to say: “O Allāh! (Make it) around us and not upon us.”[15]

To Feel the Rainfall

The scholars said it is sunnah to physically feel the wetness of the rain on your body as `Anas b. Mālik (RaḍiAllāhu ‘anhu) narrated in the following prophetic narration (ḥadīth): “We were with Allāh’s Messenger (Ṣallāhu ‘alayhi wa salam) when rain fell upon us. Allāh’s Messenger opened up his garment a bit so that the rain could touch his skin. We asked: “O Messenger of Allāh, why do you do this?” He replied: “Because it just recently came from its Lord.””[18]

Sahl b. S`ad narrated: The Messenger of Allāh (Ṣallāhu ‘alayhi wa salam) said: “Two will not be rejected, the supplication when the call (adhān) is made, and at the time of the rain.”[19]

Imām Ash-Shāfi`ī also narrates in his book Al-Umm: “Seek response to your du`ā (supplication) when the armies meet (in battle), when the prayer is called (i.e. adhān) and when the rain falls.”[20]

On this topic, Shaykh al-Islām Ibn Taymīyyah said: “The supplication is answered during rainfall,[21] when the battle starts, when the adhān (call to prayer) and iqāmah (call to commence) are given, at the end of the prayers, when prostrating, when fasting, when in a state of travel and when oppressed and so on. All of this is narrated in well-known aḥādīth in the books of Ṣaḥīḥ and Sunan. Likewise the supplication is answered in the sacred areas of Makkah such as `Arafah, Muzdalifah and Minā, as well as supplications in mosques in general. The more a mosque has virtue, such as the three sacred mosques (Makkah, Madīnah and Jerusalem), the better prayers and supplications are in them.”[22]

To Remember Allāh when Hearing Thunder

It is reported that when `Abd Allāh b. Az-Zubayr (RaḍiAllāhu ‘anhu) heard thunder, he would stop talking and say: “Exalted is the One whom {The thunder proclaims His praise, as well as the angels in awe of Him}”[23][24]

In part 2, we will be looking at specific rulings applicable in times of heavy rain.

[21] Although there is discussion about the authenticity of the aḥādīth on this issue, the view was also mentioned by An-Nawawī in his Majmū`,  Ibn Qudāmah in Al-Mughnī and Ibn al-Qayyim in Wābil Al-Ṣayyib.