Hajj: Trusting in the Promise of Allah 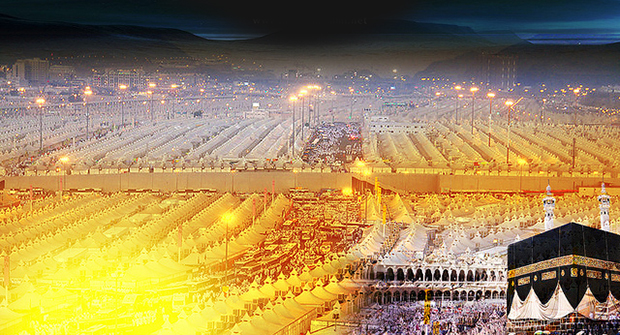 The Hajj season is upon us once again with millions of pilgrims preparing to don their ihraam and travel to the holy cities in search of Allah’s mercy and forgiveness, striving to turn over a new leaf in their lives and come closer to their Creator. In preparation for this journey, pilgrims will have spent many hours hunting for the best value Hajj packages by speaking to friends and family, checking references, and comparing price plans. Hard earned savings, which may have been accumulated over a lifetime will be invested for this three week journey. Wives and children may be left at home alone for this entire period. Basic luxuries such as a change of clothes, toothpaste, and scented soap will be abandoned for those precious few days when the pilgrims undergo severe hardship in the most testing conditions, even sleeping outdoors in the desert beneath the stars without a tent amongst millions of others from all over the world, all dressed identically in a humble pair of towels. The question inevitably arises as to why these pilgrims voluntarily subject themselves to such difficulty. What motivates them to leave their families, spend their life savings and suffer such troubles? The answer is simple – it is the promise of Allah.

The Messenger of Allah (peace be upon him) is reported to have said that the one who performs Hajj and does not commit any obscenity and wrongdoing will come out as the day he or she was born – pure and free from sins. In another hadith, the Prophet Muhammad (peace be upon him) said that the reward for an accepted Hajj is nothing less than the gardens of Paradise. It is belief in this promise of complete forgiveness, of the treasures of Paradise and the eternal pleasure of Allah that drives Muslims to make these sacrifices for His sake.

Let us reflect upon the moment when Ibrahim was commanded to abandon his wife Hajar (peace be upon her) and their baby son Ismail (peace be upon him) in the empty barren desert of Makkah with not a living soul for miles. At that time, Makkah had neither inhabitants nor a known source of water. He left them there alone with them a bag full of dates and a waterskin. For any father, it is difficult to leave his infant child in such circumstances. For Ibrahim (peace be upon him), it would have been even more heart-wrenching, for Allah had blessed him with this son after he was childless until he was 86 years old. Now, he had been commanded by that same Lord to leave his precious son in a barren desert valley.

When Ibrahim started to depart, Hajar followed him, saying, ‘O Ibrahim! Where are you going and leaving us in this valley that does not have any inhabitants or anything else?’ She repeated this several times, but he was not paying any attention to her. She then said to him, ‘Did Allah command you to do this?’ Ibrahim replied, ‘Yes.’ She said, ‘Then certainly, He will not abandon us.’ She went back, while Ibrahim kept on walking, until he was next to a hill where he could no longer be seen. He then recited the following supplication,

“O our Lord! I have made some of my offspring to dwell in an uncultivated valley by Your Sacred House; in order, O our Lord, that they may perform prayer, so fill some hearts among men with love towards them, and (O Allah) provide them with fruits so that they may give thanks.” (14:37)

Imagine Hajar sitting with her baby in the scorching desert sands alone in glaring silence not knowing what was to be their fate, how they would survive and how she would raise her child. It was not long before the water ran out and baby Ismail began to become weak with thirst. With not a drop of water in sight and her infant’s cries echoing in her ears, Hajar began climbing the hills of Safa and Marwa repeatedly, desperately searching for anyone who could help. Due to her sincerity and her faith and most of all, her trust in the promise of Allah, Gibreel descended from the Heavens to dig the well of zam-zam which continues to flow and quench the thirst of pilgrims to this day. Moreover, after a few days a group of Bedouins, seeking new pastures, happened to pass by the mouth of the valley. When they saw flocks of bird circling over it, they concluded that there must be water. Some of their men rode into the valley to explore it and found a lonely woman with a child sitting by the rim of an abundant well. By the mercy of Allah, the tribesmen asked Hagar’s permission to settle in her valley. She agreed with the condition that the well of Zam Zam forever remain the property of Ismail and his descendants. Today, during our Hajj, we literally follow in the footsteps of Hajar as she ran frantically between these hills in the roasting desert sun, believing in the promise of her Lord, which He fulfilled.

“We see here Abraham in his old age, cut off in a foreign land, having deserted his homeland and his people, being given a child. The child turns out to be a model son, with his forbearance confirmed by God Himself. Hardly had Abraham enjoyed his son’s company and seen his youth blooming so as to become his companion and assistant, when he sees in his dream that he should slaughter him. He understands that it is a sign from God requiring sacrifice. What is his attitude now? He does not hesitate for a moment. The thought of disobedience does not even occur to him. He thinks only of submission. It is true that the dream was only a signal, not a clear and direct order issued through revelation. It was a signal by his Lord though, and that was enough for Abraham to comply, not to delay, and not even to ask why.”

“Moreover, his compliance did not betray any feeling of distress, horror or panic; it was marked by calm acceptance and reassurance, reflected in his words as he put this most grave matter to his son: “My son! I have seen in a dream that I must sacrifice you. Tell me, then, what you think.” (37:102).” These are the words of a man in full control of himself and his feelings, knowing that he is only doing his duty and trusting that it behoves him to comply. We do not see any element of panic driving a person to do even what he feels to be repugnant, in order to get it done and finished with.

That it was hard for Abraham is beyond doubt. He was not required to send his only son to war, nor to put him to a task that would end in his death. Nothing of the sort. Instead he was required to undertake the task himself, by his own hand. And what task was that? It was to slaughter his own son by way of sacrifice. This was the order he received calmly, the one that he put to his son and asked him to consider carefully. He did not take his son by surprise and do what was bidden. Rather, he puts the question to him as if it were both normal and familiar. To Abraham, the question was one of obedience. Since his Lord wanted something, so be it, without hesitation. His son should also know and accept it willingly, with submission so that he too would earn the reward of obeying God and experience the pleasure of submission to Him. He himself had known that pleasure and now wants his son to feel it as the pure goodness that surpasses all else that life can offer.”

The reply of Ismail (peace be upon him) can only be the response of the child of a mother and father who sacrificed all comforts out of a firm belief in the promise of their Lord. “He said: My father! Do as you are bidden, and, God willing, you will find me to be patient in adversity.” (37:102). The response is not one of mere obedience and resignation but marked with acceptance and certainty. Ismail (peace be upon him) addressed his father with love and affection and fully surrenders to the will of his Lord, trusting in His promise.

Finally, let us ponder on the moment after this noble father and son have built the Ka’bah when Allah commands Ibrahim (peace be upon him) to make the call for pilgrimage promising him that “They will come to you walking or riding on every kind of fast mount. They will come from the farthest locations” (22:27). When Ibrahim (peace be upon him) made this call, how many people would have heard it that people would come from the farthest regions of the world? Yet, due to Ibrahim’s (peace be upon him) unwavering belief in the promise of His Lord, he obeyed without question. The phenomenal result of this call to Hajj can be seen today when millions of Muslims from the four corners of the globe make the journey by plane, by ship, by road, by camel and even by foot. All answering the call of Ibrahim made thousands of years ago. All firmly believing in the promise of their Lord to forgive them and cleanse them to the state they were in when their mothers gave birth to them – pure and without sin.

Notes: This article has been reposted.