Reflections on and from Istanbul 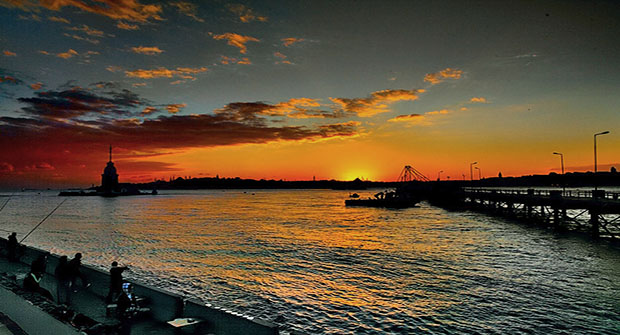 I must have looked quite a sight sitting by the river late at night observing all the hustle and bustle and writing in my book. In fact the few individuals who came up to me to ask what I was doing may well have wondered whether the ‘polis’ in Istanbul had opened a Gestapo-esque unit, delegated to note down details of subversive conversations! I was – needless to say – doing nothing of the sort. The decision to write was impulsive. I remember feeling so overwhelmed by the beauty and paradoxes of Istanbul that I was saddened by my inability to draw or paint. There was something that needed capturing and modern contraptions like digital cameras and camcorders were redundant. What was needed was not a technical eye or that of a documentary filmmaker, since there was no “gritty” reality to observe. What there was were fleeting moments and faint feelings, registering so lightly that at first I wondered whether I wasn’t trying too hard to make meaning; and yet like a presence there they were. Like the shiver that runs up your spine when a light breeze too cool for summer announces the coming of autumn, or when you feel someone’s stare on you and so you turn around, my compulsion to write came from sensations as evanescent as these. A painters brush may have been able to capture them more than photographs and certainly no photographs that I could take, but unable to command the aesthetic elegance of these mediums I turned to writing and the magic of words.

The atmosphere is warm. There is a small apple tree just outside the mosque – an impressive structure, markedly Ottomon with its grey dome and thin tall minarets. This is Turkey. The mosque dominates the skyline, its minarets piercing the darkness of this warm night. Yet despite its regal beauty and its haunting echo of a golden era now lost to the waters of the Bosphorous and time, the mosque seems to disappear in all the hustle and bustle of the streets and of the market outside its doorstep. Tent like covers are stretched between the trees under which stall holders tempt passersby to purchase their merchandise. The streets are a riot of sound and colours. A stray dog exhausted by it all lies nonchalantly on the road unconcerned by the hoard of feet that shuffle past him. Ferries carrying passengers to and fro across the river hoot their loud horns, and all is lost in a spirit of joviality. A man passes by pushing his cart of corns-on-the-cob, which for a small price he’ll roast to golden brown. The sound of music – a repetitive beat of the base – fills the air at which point the muezzin begins the adhan. The secular and the religious reverberate in the soundscape of this small strip by the river. And as the faithful make their way to the mosque nothing much changes – life goes on.

I am conflicted when it comes to Istanbul. There is something that stirs deep inside me as I see tokens of its past; a past where the Muslim world was a world of Muslims living Islam and where society reflected the development of its history. This is unlike today where the Turkey of old struggles to be more than a ghostly residuum. Whereas Dubai is rapaciously erasing its past in order to erect a hyper form of western modernity, Turkey has taken its past and placed it decoratively behind glass cases. As well as boasting over 2000 mosques in Istanbul – an impressive number given its secular and ultra modern air – the city also has an exceptionally large number of museums. It is as if Turkey has taken its past and frozen it. In fact, in its adoption of western modernity (I call Turkey’s modernity western because of its blind emphasis on secularity) it has gone to an excess in exhibiting its past as spectacle from whence an eye can be kept on it. Yet in speaking to taxi drivers in Istanbul and hotel staff, and in the recent (past seven years’) development of its politics, it seems Turkey’s Ottomite past poses a powerful emotional reservoir containing a network of symbols that will not – pace Attaturk – go away. Indeed, the high performance of Attaturkian nationalism – which involves the pervasive display of the national flag and the reverence paid to its anthem – may be seen as nervous gestures to keep at bay Turkey’s pre-Secular history. In this sense Istanbul does not induce conflict in me so much as reflect a conflict in Turkey’s national imaginary.

Birds twitter overhead, nestling in the branches of the trees that stand in the centre of the courtyard. The mosque which surrounds this courtyard has on one side of it the tomb of Ayub Al-Ansari. Tourists and worshippers blend into one as all walk peacefully around the courtyard paying their respects to the man and the atmosphere. This is far from the trendy night life that animates the centre of Istanbul, yet it is here that I find substance. There is something timeless about this place – people come here as they have done so for centuries. The man commands such respect that his “presence” elevates this building – beautiful though it is – to a state of significance. Somehow it and the reverence that everyone illustrates here – Muslim as well as non-Muslim – prevents it from transforming into something ephemeral and fleeting.  In fact, as the sound for prayer begins the very feel of Istanbul changes as it transmutes before me. The city, I think, is alive and has many identities so that as I make my way into the mosque and return salaams to fellow Muslims also making their way to Maghrib salah, I am intrigued by Istanbul’s multifarious performances.

We are having breakfast by the river. The blue of the water, a rich turquoise, is breath taking. The sunlight reflects on it and for a moment the surface is bejewelled. In a distance rises Istanbul again, divided as it is by the Bosphorous. Buildings dot the landscape on that side, but not in the cramped chaotic way of London. The buildings seem to be tucked into the land; standing in between the trees and following its rise and fall. A light breeze blows by lifting the heat of the sun so that it does not felt as scorching. “Eggs Benedict”. The waiter’s voice draws my attention back into the restaurant. For a second I was lost in the aesthetics of the scene. No manmade object could possibly compare with His magnificence as manifested through His creation. ‘Which of the favours of your Lord will ye then deny’ – the ayah comes to me and I think indeed I am favoured to have come here; the beauty reminds me of descriptions of paradise and re-commits my soul to pursue His pleasure.