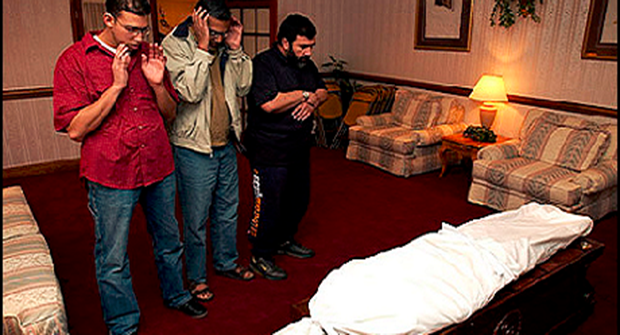 ‘O you who believe, fear Allāh as He should be feared and die not except as Muslims’[1]

In this address, the order to fear Allāh and die as a Muslim is directed, not simply to non-Muslims and Muslims, but rather to the Believers, thus showing the great importance Islām places, not only on a good life, but also a good death. As such even the believers are warned against complacency that could result in a bad ending.

Most people tend to avoid talking about death, despite it being one of the few certainties in one’s life. However there is not a single soul except that he or she would wish for a good death. So what is a good death? The Institute of Medicine defines it as follows,

“A decent or good death is one that is: free from avoidable distress and suffering for patients, families, and caregivers; in general accord with patients’ families’ wishes; and reasonably consistent with clinical, cultural, and ethical standards.”[2]

Most people would like a pain-free death, having lived life to the full, fulfilling their dreams and to die doing what they loved most. As Muslims our wishes are generally the same, however the purpose of our life ultimately determines for us what is and is not a good death. Allāh says in the Qur’ān,

‘And I have not created Jinn and Mankind except for My worship.’[3]

Therefore a soul created for the worship of Allāh must also die in such a state for it to have achieved a good death. As such, we marvel at the endings of those engaged in acts of worship at the point of death, such as those mentioned by Imām Adh-Dhahabi in his Siyar Aʿlam An-Nubala,

‘Abū Bakr b. Al-Ismaeli died on a Thursday night during the Maghrib prayer while he was reciting from Surāh Al-Fātiḥa “You alone we worship and from You alone we seek help.”’

‘Abū Hakeem ʿAbdullāh b. Ibrāhīm Al-Khabri was writing out the Qur’ān, and then he laid down his pen, said “Indeed this is a delightful death!” and died.’

‘Musʿab said “ʿĀmir (b. ʿAbdullāh b. Az-Zubair ) heard the call to prayer and said, “Take me by my hand.” So it was said to him, “You are ill.” To which he replied, “How can I hear the call to Allāh and not respond?” So they took him by his hand and he entered with the Imām for the Maghrib prayer. He bowed with him and then died.’

‘Abū Bakr b. Ziyad said, “I entered upon Ibrāhīm b. Hani (An-Naysaburi) on his deathbed and he said, “I am thirsty.” So his son brought some water and he asked his son, “Has the sun set?” It was said “No” so he turned it away and recited, “For the like of this let the strivers strive” and he died.’

These are just some of the beautiful examples of a good ending from our predecessors, besides what we know from the good endings from companions. Such as the one whom upon hearing that Paradise was as wide as the heavens and the earth flung himself into the midst of battle to attain it.

Such sacrifices and exertions displayed by our role models and replicated throughout the ages by those seeking the pleasure of Allāh stand as a stark reminder to us all as to our true purpose in life. As much as we strive to do good by people, gain their pleasure and acceptance, and bring about benefits and avoid harms and hardships, we should never lose sight of the fact that our ultimate aim is to seek the pleasure of Allāh.

As the above examples showed, these great men could have taken the concessions available to them, yet they chose to exert themselves to seek the greater reward with Allāh. We ask Allāh to give us steadfastness and a good ending, making us from the honourable ones,

‘It was said: “Enter Paradise” He said “Would that my people knew. That my Lord has forgiven me, and made me of the honoured ones!’[4]

Islam21c requests all the readers of this article, and others, to share it on your facebook, twitter, and other platforms to further spread our efforts.
Notes: