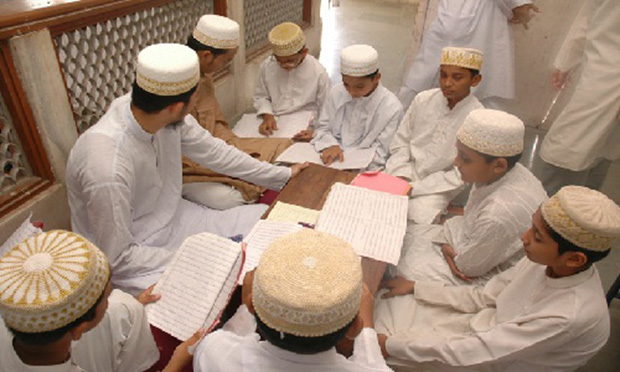 I remember smiling politely at this mother who had been explaining the reasons why she wanted her son to attend a primary Islamic faith school. She did not wear the hijab (the Islamic Headscarf) and did not seem to know a great deal about her own faith, yet while part of me was full of admiration for this lady who evidently found it important to send her son to a school where he could learn how to read the Qur’an, I was equally filled with concern, not because she did not know how to read the Qur’an, but that she felt no importance to learn it herself.

This is also, unfortunately, the case with a number of parents who send their children to the local madrasah. Oftentimes parents themselves will not be literate in the Qur’an and pay little or no attention to it at home, although young Abdullah or Aminah will be forced to attend the local masjid, where they will be sat with a group of children who will periodically be given a stern word or if they’re really lucky, a little flick of the pen to keep them in line.

Some children tell their parents that they are not enjoying the sessions or that the maulana is being too strict with them, but they are often placated and reminded that, “You have to go to madrasah because it’s important to read the Qur’an!” I wonder what these parents would say if the child turned around and said to them, “But you never read the Qur’an?”

Children have and will continue to bear with this contrived and uninspiring method of learning the Qur’an, because their one saving grace is that they will be free after the age of sixteen. Once they are old enough, they can come back from school, kick back and watch whatever useless drivel is being aired on the television at the time, and sometimes with their parent(s) curled up on the sofa next to them. Anecdotally, I know some of my ex-students who have graduated from a madrasah or even from the secondary faith school that I taught at who have failed to continue to pay attention to the Qur’an in any way.

Surely this is all a matter of culture? When society considers a particular object, style, fashion, or activity to be important, the majority of people tend to jump on the bandwagon. I would argue that the household and community jointly placing emphasis on reading and understanding the Quran on a regular basis will create the right environment for children to, intrinsically, want to learn it.

What we need to ask ourselves therefore is: How important is the Qur’an really to us? How much attention do we really pay and not just in terms of reading, but understanding and trying to live our lives accordingly? How have we considered developing a culture for ourselves, our children and the wider Muslim community where the importance of the Qur’an is highlighted in our lives?

It would be unfair of me to say that all madrasahs are run in the manner that I described previously and it would similarly be untrue to state that all children do not like to attend madrasah, however, a tick-box, tokenistic relationship will remain with the Qur’an for the majority of children, if we continue to educate them in the manner described. We need to think about our aims and objectives; what do we want to achieve? What was the relationship of the Prophet (may the peace and blessings of Allah be upon him) and the Companions with the Qur’an? Can we really implement solutions to educate our communities in the Qur’an that were appropriated from different cultures, times and contexts?

I am not necessarily advocating a particular solution, but feel that we must all try and consider how we can change the status quo, for like a number of solutions in society today, it only serves the few. It would be wonderful to hear your thoughts on this topic and whether you agree, disagree, what solutions you may have, and how we can make progress in this area.

Notes:
Islam21c requests all the readers of this article, and others, to share it on your facebook, twitter, and other platforms to further spread our efforts.
EDUCATION EDUCATORS Face to Face INSTITUTIONAL MADRASA MADRASAS MUSLIM PARENTS PARENT PARENT-CHILD PARENTHOOD PARENTING PARENTS QURAN
Share. Facebook Twitter LinkedIn Email Telegram WhatsApp
Previous ArticleThe National Trust and the Muslim Duty
Next Article The Egyptian elections: Victory for Mohammed Morsi