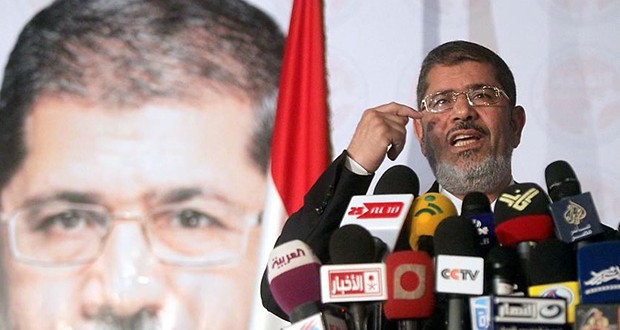 The victory for Mohammed Mursi of the Muslim Brotherhood in Egypt’s presidential election is a milestone in the history of modern Arab countries. After having been imprisoned by the ex-president Husni Mubarak, one of the most corrupt dictators of the Middle East, he will now replace him as the president. This is not a victory for the Brotherhood or even political Islam, but a victory of truth over falsehood and a manifestation of the real colour of Muslims, whether they are educated, lay people, men, women, young or old. Allah says,

“He sends down water (rain) from the sky, and the valleys flow according to their measure, but the flood bears away the foam that mounts up to the surface, and (also) from that (ore) which they heat in the fire in order to make ornaments or utensils, rises a foam like unto it, thus does Allah (by  parables) show forth truth and falsehood. Then, as for the foam it passes away as scum upon the banks, while that which is for the good of mankind remains in the earth. Thus Allah sets forth parables.”[1]

Beyond the many reservations we have of democracy, we always believed that had Muslims been given a genuine choice to choose between Islam and complete secularism, they would chose Islam. This has been manifested in countries where Muslims were subjected to staunch efforts to hijack their Islamic identity. Accordingly, I believe that the imperial powers will always be the first to oppose any actual democratic process in the Muslim world as they know that the result will be favourable to Islam and Muslims.
The first thing we should do is thank Allah for His blessings that He has bestowed upon us after the long wait for political change across the Arab world. The new leadership should, even more than before, refer to the Prophet’s (peace be upon him) methodology of establishing the first Islamic state. The manifesto of the Prophet was very simple; “O people, exchange greetings of peace; feed people, strengthen the ties of kinship, and be in prayer when others are asleep, you will enter paradise in peace.”[2]  Similarly, the manifesto of the Prophet Abraham in establishing his first Islamic state, the most significant state in history – the Islamic state of Makkah, was reflected in his supplication (the first mentioned in the Qur’an):

“And [mention] when Abraham said, “My Lord, make this a secure city and provide its people with fruits – whoever of them believes in Allah and the Last Day.” [Allah] said: “And whoever disbelieves – I will grant him enjoyment for a little; then I will force him to the punishment of the Fire, and wretched is the destination.”[3]

While peace is at the top of the list of priorities, food and basic economic needs are the next priority. However, the main goal of the Islamic state is to facilitate entry into paradise in peace. The new Egyptian authorities should realize that they face a very challenging situation whereby many will work to cause failure which will then be attributed to the Muslims of Egypt. They must work hard in all spheres.
We also advise all Muslims in Egypt to cooperate with the new leadership, irrespective of their differences with them, in order not to destroy the initial success of attaining leadership. Allah says in the Quran,

“And cooperate in righteousness and piety, but do not cooperate in sin and aggression. And fear Allah; indeed, Allah is severe in penalty.”[4]

Everyone should realize that a successful Egyptian model means success for all Muslims around the world. It will open the doors to real change in all Arab and Muslim countries. We also appeal to Muslims outside of Egypt to support their brothers in Egypt in this regards. There are many ways to support them which cannot be covered in this short article.
We advise the new Egyptian government to start a new page in Egypt’s history and to avoid any act of revenge against parties or individuals, including those who used to persecute them. Their model should be our Prophet (peace be upon him); he pardoned all the people of Quraish when assuming overarching leadership.
The new Egyptian government should not repeat the momentous mistakes of the Sudanese leadership (who were also part of the Brotherhood). The Sudanese government over-compromised in regards to Islamic laws out of fear of external powers and anti-Islamic groups within Sudan. We have seen what they achieved after all of their compromise; they neither pleased their Lord nor the powers. Instead they lost almost one third of Sudan as well as destroying the economy. They forgot the fundamental divine law:

“Whoever has the Hereafter as his main concern, Allah will fill his heart with a feeling of richness and independence; he will be focused and feel content, and this world will come to him in spite of it. Whoever has this world as his main concern, Allah will cause him to feel constant fear of poverty; he will be distracted and unfocused, and he will have nothing of this world except what was already predestined for him.”[5]

We should all remember the main divine code regarding establishing Islam on earth: