World Cup Group B & the Battle of the Three Kings 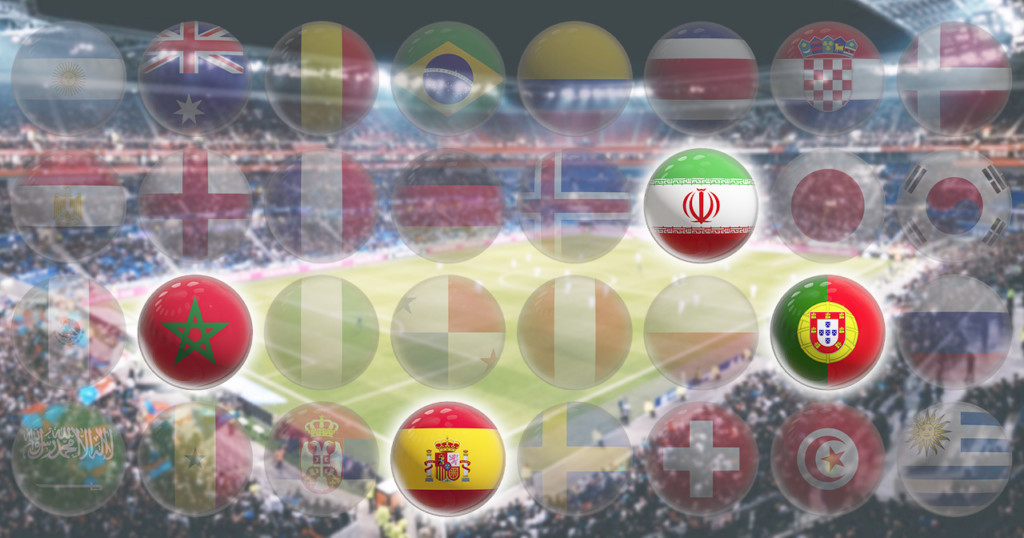 As the group stages of the World Cup draws to a close, it would be a terrible shame not to bring attention to Group B in order to relate an incredible battle which took place in the 16th century involving the geographical locations which are known today as Portugal, Morocco and Spain.

The 16th century was of course a period when the Ottomans were one of the foremost powerful states in the world. It was in this century, in 1577, that the Ottomans turned their attention to a rival sect, the Shi’a dynasty of Persia. In order to exploit the internal turmoil following Shah Tahmasp’s death the previous year, Sultan Murad declared war with the aim of conquering the Caucasus. Persia today, and the Shi’a world in general, is represented by Iran, who are the other team in Group B. However, our focus is primarily on the other teams in the group.

In Morocco, the Saadian dynasty was the ruling power. In 1576, the Saadian leader, Abdul Muhammad was deposed and succeeded by his uncle, Abd al-Malik, who was supported by the Ottomans. North Africa at the time found itself in a tug of war between Spain, Portugal, the Ottomans and the Saadis of Morocco. Whilst many supported Turkish Ottoman influence, there were some in Morocco who would rather support a Spanish advance than that of their fellow Muslims. Abdullah Muhammad was one such individual who followed in the footsteps of his father in forming an alliance with Spain against the Ottomans who were in neighbouring Algeria, and it is for this reason Abdullah Muhammad’s uncles, Abd-al Malik and Ahmed, dethroned Abdullah Muhammad. Abd al-Malik and Ahmed recognised the Ottoman Sultan Murad III as their Khalifah (Caliph) and had been exiled in Ottoman territory for more than a decade before deposing their nephew with Ottoman support. After being dethroned, Abdullah Muhammad sought shelter in the Portuguese controlled Ceuta.

Portugal at the time was being ruled by a young, inexperienced and overzealous leader, King Sebastian who inherited the position of king at the age of three. Abdullah Muhammad, feeling bitter at being removed from his position as Emir/King by his uncles, made Sebastian an offer; if he supported his campaign to reclaim his position he would, once reinstalled as leader and as Emir, make Morocco a vassal state of the Portuguese.  The young Portuguese king’s religious fanaticism in waging a Crusade to rid Africa of the “Moors” (a derogatory reference to Muslims) clouded his judgement in agreeing to embark in battle with a Moroccan army that had tacit support of the powerful Ottomans. Sebastian was also mindful that the Ottomans, who were supporting Abd al-Malik, would be a threat to the security of the Portuguese coasts and to their colonial interests in Guinea, Brazil and the Atlantic Islands. Further, Sebastian was also vying for supremacy with his rivals in the world of Christendom and in the Iberian Peninsula, the Spanish Empire who were being ruled at the time by his cousin, Philip II, were still riding high following their victory against the Ottomans at the Battle of Lepanto in 1571 – Sebastian wanted his own victory to parade.

Accordingly, in 1578, Sebastian began assembling an army which was made up of the Portuguese as well as Christians from other parts of Europe’s Catholic community. His army was also supplemented by Moroccans who were loyal to Abdullah Muhammad. In the summer of 1578, the Portuguese army of around 20,000 left the shores of Lisbon, Portugal on their voyage across the Atlantic Ocean to Morocco. Not only was it a suicidal decision for Sebastian to engage in war in North Africa in the summer, but he also chose to land and then embark inland to their destination rather than sailing up all the way along the coast with the armada to a plain north of the town known locally as al-Qasr al-Kabir (in Portuguese, Alcácer-Quibir).

If the army of Sebastian were not already tired and feeling demoralised in view of the sweltering heat and the arduous journey, it would have only increased at the sight of the formidable opposing army that had been assembled to meet them under the leadership of Abd al-Malik of at least 50,000 battle hardened Muslim Berbers, Arabs and Turks who had all responded to the call for jihad against those who were considered as crusaders. The army also consisted of a group of Muslims who had an added motive in this battle, the Moriscos. The Moriscos were Muslims who were forcibly converted to Christianity but remained cryptic Muslim. They represent a group who were victims of Christian Spain’s inability to deal with diversity and multiculturalism following the end of Muslim Spain in 1492. Retold in all its complexity and poignancy, the tale of religious intolerance, political manoeuvring and ethnic cleansing of the Moriscos resonates with many modern concerns. The treatment of the Moriscos and their expulsions were not simply the result of religious bigotry, but also have more modern resonances in the official language of security concerns about ‘alien’ populations who might have allegiances beyond the state in which they live which could result in treachery. The tragedy of the Moriscos was part of a recurring dynamic that has been repeated in many other contexts, in which a powerful majority seeks to remake or define its identity through the physical elimination or removal of supposedly incompatible minorities whose presence is imagined as potentially defiling or corrupting their own “values”. Their story evokes the present Islamophobia which permeates so much current media and political posturing.

On 4 August 1578, Sebastian charged towards his adversary and with this began the battle. The battle was considered to be ferocious and not too soon after commencing, the first king of this battle fell, al-Malik, who fought valiantly and laid to waste many of the invading and crusading enemy. It should be pointed out that such was al-Malik’s courage that he fought in this battle despite being unwell. Many have reported that he did not die at the hand of the enemy bur rather died from natural causes. His death rallied the Muslims and soon afterwards, this battle was to consume its second king, in this instance, the dethroned and treacherous Abdullah Muhammad who was alleged to have died by drowning. One king now remained, Sebastian. The Muslim army continued to charge at the enemy and eventually managed to kill Sebastian and, with this, the third king in this battle fell. Only one battlefield, yet three kings dead lending itself to being remembered as The Battle of the Three Kings.

Sebastian’s army were next to completely annihilated and with this the Avis family’s rule of the Portuguese came to an end, to be replaced by Spain. For the Moroccans, al-Malik’s brother, Ahmad al-Mansur, who fought in the battle alongside his brother, now became king. He was given the title “al-Mansur” (the victorious) on account of this battle. Ahmad is well known by the British of course. It was he who sent his Secretary Abd al-Wahid bin Massoud as ambassador of Morocco to the Court of Queen Elizabeth I of England to negotiate an alliance against Spain as he very much desired to reclaim Andalusia.

The Battle of al-Qasr al-Kabir was a major event in world history. It marked the end of the western Crusade and their intentions for North Africa were severely dented. Morocco remained with the Muslims despite the newly Christianised Spain and Portugal’s intentions of seeking to make further inroads into the Muslim world beyond Granada.

Spain would go on to suffer a heavy defeat at the hands of the English a decade later when the Spanish Armada sought to invade England – a defeat made possible by Protestant England aligning itself with the Ottomans and Saadian dynasty against Catholic Spain.

As for Portugal, although some historians say that they never really recovered with the loss of Sebastian, they may now have found the new hope of the nation, Ronaldo. Much like Sebastian’s Portugal, Ronaldo’s Portugal wishes to prove its own mettle having lived in the shadows of their Iberian rivals, Spain, for many years.

Shi’a Iran, much like then, continues to have hostile relations with the Sunni world which was aggravated in recent years with the conflicts in Syria, Iraq and Yemen.

As for the Moroccans and the rest of the Muslim world in general, they no longer have the power that they did back then. Nevertheless, Morocco’s game against Spain, which many are convinced they ought to have won had it not been for the apparently scandalous refereeing, gave Morocco substantial international prestige much like how Abd al-Malik’s victory furthered its diplomatic and commercial status at the time. More importantly however, their game against Spain showed that despite being the underdogs, with heart and faith, the Muslims can be a match for anyone.