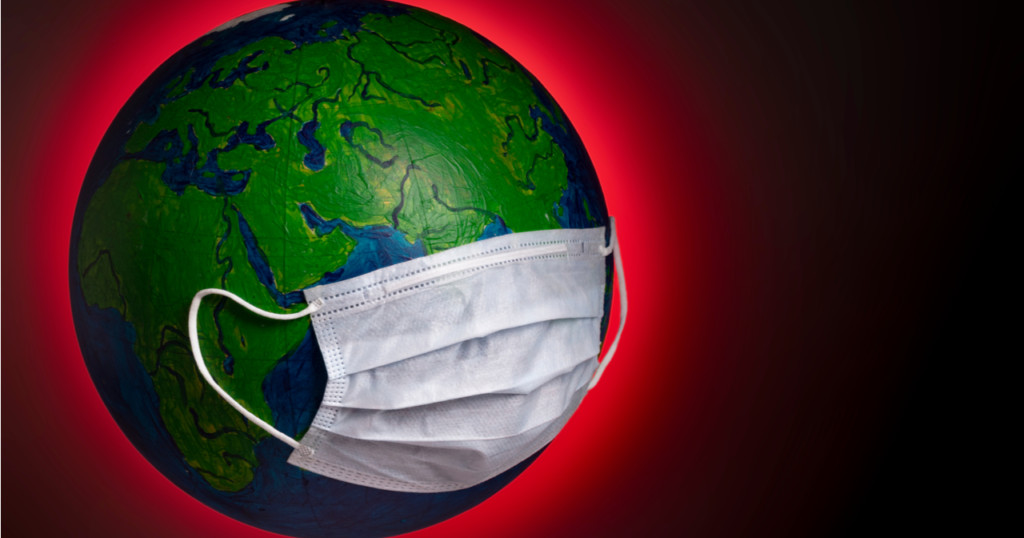 COVID-19 has encompassed the world. Such a crisis should make us remember Allāh, His Dīn, and His Prophet, all of which are comprehensive and address our beliefs and values, offering humanity a much-needed perspective on how those who are in political authority should respond during this crisis.

The current pandemic has made some people rush to stock up on toilet paper and food supplies, fearing as if they were preparing to bunker down during a nuclear holocaust. Others are fearful for the health and the safety of themselves and their families.

Fear makes people irrational, uncritical, and easy for others to control and manipulate.

It makes us lose perspective. We cannot bear the thought that we might be unable to pray Tarawīh in congregation, forgetting that this disease will kill thousands. We start to feel that we are the only ones suffering, forgetting that there is a world out there where over 200,000 civilians have been killed in Syria, or that people are dying of malaria and Ebola every day.

The Muslim should not fear a virus, or anything of creation – rather, we should fear Allāh, the One who created the virus!

The Islamic ‘aqīdah should build resilience in our community. We do not believe that it is a virus that takes life – it is Allāh. Allāh says:

“Nor shall a soul die except by Allah’s permission, at a decree determined.”[1]

We believe that we cannot extend our lives by a moment. Allāh says:

“And for every people is a [specified] term. So when their time has come, they will not remain behind an hour, nor will they precede [it].”[2]

We do not believe that it is a doctor who cures – it is Allāh, so it is upon Him that we should rely. Allāh says:

“Say, ‘Never will happen to us except what Allāh has decreed for us; He is our Protector.’ And upon Allah let the believers place their trust/reliance.”[3]

Such a mindset would address people’s fear.

Islam should make us see the actions we should do now through the lens of accountability. In a pandemic, individuals are not accounted for regardless of whether they get infected by a virus or succumb to the illness. What they may be accountable for, however, are actions that might prevent harm to others (i.e. washing hands in order to reduce transmission to others, and self-isolating if they have symptoms in order to reduce the risk of harm to others who maybe more vulnerable). This is something we can be rewarded for if we intend to reduce the risk of harm to others – or accounted for if we deliberately or neglectfully put people at risk.

There are unintended consequences of being overcautious and overanxious. We may create a fearful and neurotic community. We may virtually imprison older people such as our parents whilst meaning well for them, but instead making them miserable and potentially harming them through inactivity.

The reality is that 80% of people who get the virus will have a cold-like or flu-like illness and will recover with no ill effect and gain immunity after their illness. But up to 20% of mostly vulnerable people may get a severe illness needing hospital treatment – these are the ones we do not want to do anything to harm from any action or neglect our side.

Much of the fear comes from living in, and being affected by, a society that is ever more fearful of death and hardship; living, as it does, for the ephemeral.

A sincere Islamic leadership at a government level, communicating a correct understanding, would build the correct emotions as well as appropriate actions, all in harmony with appropriate policies.

Islam has a distinct approach to policymaking

Announcing his government’s policy towards COVID-19, Boris Johnson said that “many families in Britain will lose loved ones before their time”, recognising that his ‘delaying’ phase and trying to build herd immunity in the population may not help the most vulnerable. Indeed, this came days before there was any advice for the elderly. This is a classic ‘utilitarian’ approach (i.e. seeking the greatest good for the greatest number), but if the weakest in society suffer, then so be it.

This is not an Islamic approach. Our politics – in terms of beliefs, ideas, values, and actions – is from the Qur’ān and Sunnah. The Sunnah tells us that it should also be based on the Sunnah of the righteously guided Khulafā’ – the first of whom, of course, was Sayyiduna Abu Bakr al Siddiq (may Allāh be pleased with him).

When he assumed office as Khalifah, Abu Bakr voiced a political principle in contrast to the utilitarian policy of the British government today. Abu Bakr said, “The weak among you is deemed strong by me, until I return to them that which is rightfully theirs, in shā Allāh. And the strong among you is deemed weak by me, until I take from them what is rightfully due in shā Allāh.” (Al-Bidāyah wa al-Nihāyah). This would mean that an Islamic ruler, who looked after the affairs of the people, would prioritise helping the people as much as possible, especially the most vulnerable. It does not necessarily mean that health workers dealing with every case treated at the frontline put their maximum efforts into cases they deem are not like to succeed. But it would mean that policymakers would have focussed on protecting the most vulnerable in terms of public health by trying to contain the virus at the outset – or by taking measures even now – but this did not happen.

So a government should act according to the Book of Allāh and the Sunnah of His Messenger (sall Allāhu ʿalayhi wa sallam) – for this is the work of governments, and cannot be done by individuals or groups or institutions like mosques. Leadership in this matter is not from scholars and academics. It is from legitimate political authority that should be founded on Islam.

Central to Islamic governance and the Khalifah – as well as his Wula (governors) and assistants – is guardianship (to look after people’s affairs) and to implement specific Islamic rules, some of which are relevant to this pandemic.

With regards to the generality of looking after people’s affairs, the Messenger of Allah (sall Allāhu ʿalayhi wa sallam) said:

This would include, but is not limited to, meeting people’s healthcare needs, with measures not dissimilar to the expansion of hospital capacity in Wuhan, as well as looking for specific cures and vaccinations.

Moreover, there are specific rules that are invoked here, such as the instruction the Messenger of Allah (sall Allāhu ʿalayhi wa sallam) to quarantine areas where there is an epidemic. ‘Abdur-Rahman bin ‘Auf said,

“I have heard Allah’s Messenger (sall Allāhu ʿalayhi wa sallam) saying, ‘If you hear about it (an outbreak of plague) in a land, do not go to it; but if the plague breaks out in a country where you are staying, do not run away from it.’”[5]

The second Khalifah of Islam, Umar ibn al Khattab (may Allāh be pleased with him), famously implemented this rule when there was an outbreak of plague in his time.

When thinking about the Coronavirus outbreak and how Islam would address it, one cannot think purely in terms of individual actions.

Islam is a way of life that encompasses communities, societies, and global affairs. These matters which sit at an Ummah level are delegated to the Amīr of that Ummah, the Khalifah, to implement rules and policies that emanate from the Islamic creed.

This brief reflection shows that if the world had the alternative of the leadership of Islam as an example in such a crisis, then humanity would not have to accept to be trapped in this broken system that presides over a diseased world.

“And thus we have made you a just community that you will be witnesses over the people and the Messenger will be a witness over you.”[6]