The right of truth is for it to be imparted, not hidden or obscured. In Arabic, the word for ‘worthy‘ (ahaq) derives from the word for ‘truth’ (haq). This implies that the truth is the worthiest pursuit and objective.
Islamic Thought 25/08/2022No Comments6 Mins ReadBy Ahmed Hammuda 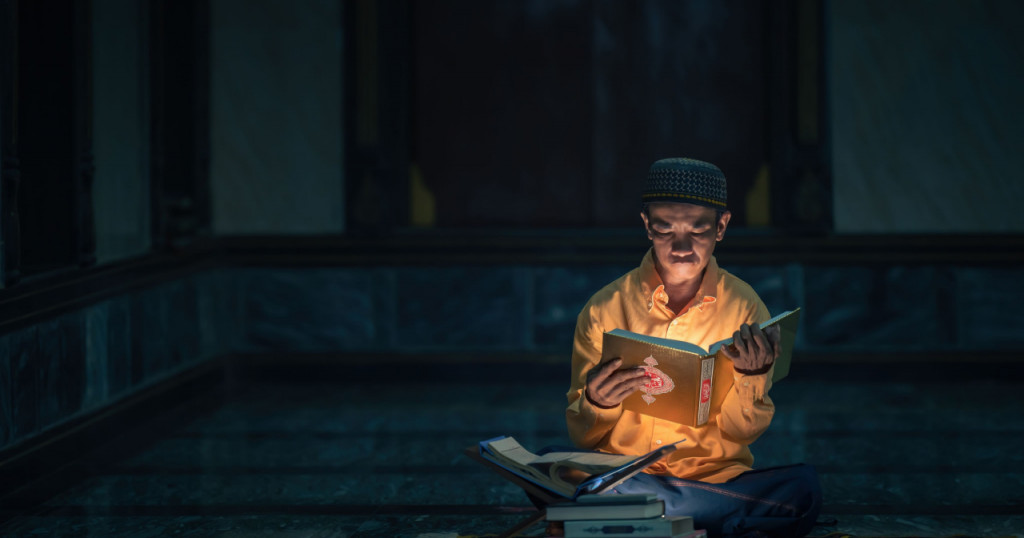 To acquire divine knowledge is to inherit a prophetic legacy of action and propagation. The learned are like radiant beacons of light moving between sheathes of darkness. They are the glowing effects of the Prophets of Allah, through whom He conveyed His covenant to man. Their presence illuminates the paths of those who come near them.

Central to every messenger’s duty was his conveyance and transmission of the message of truth. The heirs of that legacy protract that duty; learning, conveying and proactively blotting out the murk of ignorance and misguidance whenever they encounter it:

“O Messenger! transmit what has been sent down to you from your Lord. If you do not do it you will not have transmitted His Message.”[2]

The right of truth is for it to be imparted, not hidden or obscured. In Arabic, the word for ‘worthy‘ (ahaq) derives from the word for ‘truth’ (haq). This implies that the truth is the worthiest pursuit and objective. Both appear in the following verse:

Ask (them, O Prophet), “Can any of your associate-gods guide to the truth (al-Haq)?” Say, “(Only) Allah guides to the truth.” Who then is more worthy (ahaq) to be followed: the One Who guides to the truth or those who cannot find the way unless guided? What is the matter with you? How do you judge?[4]

For one to refrain from imparting what is true, or worthiest for that moment, despite being able to, when such can rectify another person’s misguidance, resolve a schism or stand in the face of an injustice becomes tantamount to consent. One can only see their refraining a worthier (ahaq) endeavour if they first undermine (falsify) that truth (haq) being concealed. And as the nature of truth is to be imparted (both clear and clarifying), like intense light which burns away the dusk, forcing it to stay concealed within oneself will bridle its holder with its unbearable heat.

Such deplorable behaviour was rampant among the followers of Judaism and their clergymen. Seeing themselves as God’s ‘Chosen People’, they absolved themselves from the need to salvage ‘other’ gentiles from misguidance. In effect, they saw themselves exclusively worthy of Allah’s mercy and absolution. This cultish demeanour with the truth and their failing to share their knowledge with others, to guide them or speak truth to power brought about their corresponding removal from His Mercy, culminating in God’s curse (Arabic: la’nah):

“Those who hide the Clear Signs and Guidance We have sent down, after We have made it clear to people in the Book, Allah curses them, and the cursers curse them.”[6]

Some of them even earned by way of their consensual silence:

They listened to lies silently, ‘Samā’ūn’, failing to denounce the falsehoods they heard which forms the crux of why they were cursed. And though they were not heard, or necessarily known to be proponents of that falsehood, their silence spoke just as loud.

There is little doubt that they knew their silence, as people of scripture and knowledge, would deliver that effect without needing to openly profess falsehood. Had they spoken in support of falsehood, Allah would have instead called them ‘mutakalimūn bil-bātil’ or ‘speakers of falsehood’, but their silence was enough to make them culpable for the lies peddled by others.

Correspondingly, their consuming “ill-gotten gains” was to their earning by way of that silence or in today’s terms, they were ‘Scholars for Dollars’. Those who had reason to pay them off knew of their reformatory impact, as learned men, should they have spoken out. It also speaks volumes about what the peddlers of lies are prepared to offer those who know the truth in extortions, or in new terms, ‘hush money’ in exchange for staying quiet. Today, this presents as one of the most abominable phenomena among learned men under many absolutist regimes.

A group of them once approached the Prophet ﷺ seeking his judgement for two who had committed adultery:

Notice how the man in question was cautious not to openly deny that the verse existed. Instead, putting his hand over it, his actions were synonymous to promoting the falsehood in question.

Some will argue that silence is more palatable to the masses. Countering a falsehood may compromise one’s popularity or charisma, being likely to stir up mass objection or loss of ‘followers’. These may focus their activism around palatable messages and affectionate, more acceptable narratives (the ‘known’ or the ‘ma’rūf’). They may even have little wealth, drive cheap cars or wear simple clothes but their words are cleverly crafted so as not to stir up the tastes of their crowds.

Imām al-Thawri’s words tell that being an ascetic is not by one’s mere abstinence from taking corporate gifts or large pay cheques or by wearing rugged clothes. Instead, one can also choose to be austere with respect to their presence, platforms and audiences, seeing no reason to compete for these ultimately material returns. Sheikh Abdul Aziz al-Tarefe says:

It becomes not only incumbent on those who recognise evil to contest it, but follows that it is better and undeniably ‘safer’ to be ignorant of an unfolding evil than to recognise it and choose silence over speaking.