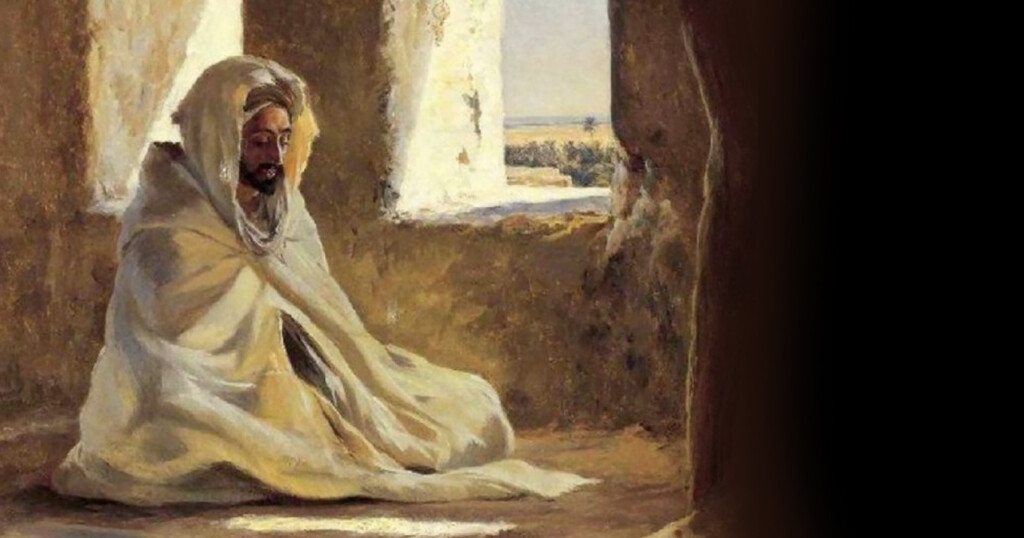 The scholars of Islam are the world’s beacons of light. They carry the heritage of the Prophets of Allāh and are entrusted to speak the truth, “struggling in the Way of Allāh, fearing no blame from anyone.”[1]

“(Remember, O Prophet) when Allāh took the covenant of those who were given the Scripture to make it known to people and not hide it, yet they cast it behind their backs and traded it for a fleeting gain. What a miserable profit!”[2]

Today, it is becoming rarer to find pure objectivity among the scholars who are surrounded by tyrants and are under governmental pressure amidst politicised religious institutions, tempting salaries, or obstinate allegiance to groups and organisations.

The Qur’ān rebukes with the harshest terms the ‘politicised’ scholarly class of old, particularly Judaic rabbis who knew the truth, not only for bending or obscuring it for the sake of the ruling classes and a petty wage, but for simply remaining silent before the depravities of society. They ‘ate’ (made a living) out of their silence:

“They eagerly listen to falsehood and consume forbidden gain…”[3]

Realising that they were the custodians of the truth and in fear of being like those who “hide Allāh’s revelations, trading them for a fleeting gain”,[4] the scholars of Islam went to fascinating lengths to maintain their crucial independence from corrupting and manipulating forces in the ruling class.

By Allāh’s will, these articles will reveal some examples of this and show how the scholars of Islam exposed the historical alliances between ‘fraudulent scholars’, ‘evil leaders’, ‘abhorrent mystics (Sūfiyyah)’, and ‘corruptible judges’ to preserve their independence and impact on society.[5]

The father of the Imam and Muhaddith, Yazid b. Zari’ (d. 183AH), was the ruler of the city of Al-Abla in Iraq. It is said that when he died, he left Yazid an enormous inheritance. However, fearing that it would compromise his own scholarly independence, Yazid left it untouched as his father was employed by the state. Similarly, Abu al-Qāsim al-Bāji al-Andalūsi (d. 493 AH) “abandoned his father’s inheritance – for having accepted gifts from the Sultan – despite it (the inheritance) being abundant.” It is said that his father, Abu al-Walīd al-Bāji (d. 474 AH) left behind 50,000 dinars, and that Abu al-Qāsim’s abstinence from his father’s wealth left him impoverished.[6] These fascinating stories reveal the extent of the impositions the scholars of Islam put in place to maintain their scholarly integrity, control their relationship with the authorities, and ensure no conflict of interest.

Throughout Islam’s vibrant history, such rigorous conditions were what qualified these scholars to endure as the leaders of Islamic legislation, Fatwa, the judiciary, objective guidance, and education. By keeping their distance from political authorities, this group of esteemed scholars remained in the sphere of the laity, systematically strengthening the common people while intentionally reducing the size of the establishment. We will focus on the methodology employed by the collective scholarly community to ensure this gulf, notwithstanding the fact that certain individual scholars did involve themselves with the state either temporarily or for a particular benefit.

Scholars exerted every effort to maintain their distance from the political authorities at two primary levels: an internal level related to how they addressed the scholarly community itself, and an external level related to their relationship with the public, including the contribution of the latter in ensuring that this distance is maintained.

At the internal level, scholars would consistently warn one another against mixing with political leaders or royalty, or from accepting money from them through salaries or rewards. Imam Sufyān al-Thawri (d. 116 AH) refused his legitimate share of the war booty, reasoning: “I know it is permissible for me, but I would hate that a form of love transpires in my heart for them (political leaders and princes).”[7]

It seems that by the 5th century AH, more scholars began relying on gifts from the Sultan as state-sponsored institutions and organisations began to entrench themselves, including schools that began operating independently from the Masājid. Many scholars thus became apprehensive that such an arrangement would weaken scholarly independence, warning that such provisions were unprecedented in Islam’s former eras. Imam al-Ghazāli (d. 505AH) states:

“Sultans would only gift to those who they wanted to use for their own interests, beautifying themselves by involving (those scholars) in their gatherings, and tasking (those scholars) with making du’ā, extolling and applauding them in both their presence and absence.”[8]

Al-Ghazāli expounds further in what almost sounds as if his recommendation to scholars was one of complete disconnection with the political establishment:

“If it were not for the fact that those (scholars) who take (money from the political authorities) are not humiliated by first, needing to ask; second, becoming hesitant to serve; third, praising and making du’ā (for the ruler); fourth, helping him (the ruler) when requested; fifth, increasing his numbers in his councils and processions; sixth, showing him love, loyalty, and support against his enemies; and seventh, covering up his injustices, flaws, and sins, they would not have been afforded a single dirham, even if they were as good as (Imam) al-Shāfi’ī (rahimahu Allāh).”

“Thus, today it is impermissible to take a single dirham from them, even if one knows it to be Halal, because of the aforementioned. How, then, if one knows that it (the wealth) is Haram or dubious? As such, those who have the audacity to take their money and then liken themselves to the Companions and the Tābi’īn has indeed likened the angels with blacksmiths.”[9]

During what is known as the ‘Era of the Petty Kings’, the scholar Ibn Bisām al-Shintirīni (from modern-day Portugal) wrote a book titled Al-Dhākhira fī Mahāsin Ahl Al-Jazīra (The Repository of Beauties of the People of Cordoba). The book details the history of Islamic Spain, particularly leading up to and including the troublesome era in which Ibn Bisām lived in. In his works, he slams the scholars who sold out to the political establishment and who benefited from “the gifts of the (petty) kings who took the worst forms of taxes and hideous tolls, bringing onto themselves the mistrust that comes from such a filthy appetite. I presumed the scholars of Shūra were hiding the reality of their incomes, until I heard the best of them pleading and eagerly waiting for it, and as such this matter was exposed to me. And they (those scholars) know better what they are up to – despite being role models – may Allāh not make them such for us.”

Severe Warnings from the Scholarly Community

In his Maqāmāt, the famous Mu’tazilite scholar al-Zamakhshari (d. 539AH) validly asks: “What is it with evil scholars gathering and writing down the definitive aspects of the Sharī’ah, only to give (undue) concessions to evil rulers (in those same aspects)?”

Warning scholars from issuing verdicts suited to the appetites of the ruling political authorities, Shihāb al-Dīn al-Qarāfi (d. 684AH) says: “It is not appropriate for the Mufti to have two opinions on a matter, one sterner than the other, such that he issues the sterner verdict for the laity and the easier one for the rulers. This is very nearly (a type of) deviance (fusūq), a betrayal of one’s religion, a form of manipulating Muslims, and evidence of one’s lack of veneration of Allāh.”[10]

Al-Qarāfi’s appeal to a scholar’s fear of Allāh is unsurprising, as such fear should come hand in hand with a person’s knowledge, and those of knowledge should correspondingly be the most honest and morally conscious. Allāh says:

“It is only those who have knowledge among His slaves that fear Allāh. Verily, Allāh is All-Mighty, Oft-Forgiving.”[11]

In his Tabaqāt Al-Shāfi’i, Tāj al-Dīn al-Subki (d. 771AH) argues that compromised scholars, in fact, corrupt the political authority itself. He asserts:

“Deviant scholars, in fact, destroy sultans. This is because scholars are either righteous or evil. The righteous of them will hardly ever frequent the doors of kings. The evil of them will instead throw themselves onto them, then finds no alternative but to follow their whims and dilute their extraordinary misdeeds. His (evil) to society is worse than that of a thousand devils, just as a righteous scholar is better than a thousand worshippers.”

“The most deviant (fāsiq) of Muslims are the evil scholars and deprived and abhorrent mystics who frequent the oppressors whilst knowing what the latter are up to, including drinking alcohol, all kinds of immorality, taking (forbidden) tolls (mukus), oppressing people on a whim, shedding blood, and subduing those who call them to what is contained in the scriptures and what was revealed on the messengers. As such, do not be deceived by the actions of these (evil) scholars and deprived (mystics).”[12]

According to Imam al-Husni, the unreserved mixing of scholars with corrupt rulers only legitimises the latter’s sins and injustices in the eyes of the public, even if such mingling is done ‘in the interests of the greater good’:

“Of the greatest calamities is that the oppressors… take people’s wealth illegitimately, then use it to feed (the poor) in charity, and thus their ill omen is transferred to the poor. Worse still is that evil scholars and abhorrent mystics frequent these oppressors. Little do these fools know that by them doing this, they are inviting the Har‏ām (onto themselves).”

Imam al-Husni further held that the banquets of sultans should not be attended by the scholars because they are gatherings of “the worst of people…like the emissaries of oppressors and corruptible judges.”

In the next article, we shall outline the extent of the aforementioned warnings and measures in preserving the eminent standing of Islamic scholars, including how they are seen by the masses and their impact on society. And Allāh knows best.