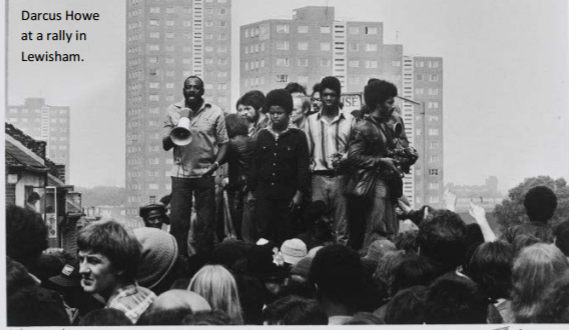 I recently heard of the death of two great activist leaders, Darcus Howe and Ahmed Kathrada. Ahmed Kathrada was a Muslim, an iconic figure, and a comrade of the great Nelson Mandela. He took up the challenge against injustice and Apartheid in South Africa and around the world. Mr Kathrada spent 26 years of his life in prison, 18 of which were on Robben Island with Mandela and other African National Congress members. Ahmed Kathrada died on the 28th of March 2017 at the age of 87.

As for Darcus Howe; his death falls closer to home to me as I grew up in the London Borough of Lewisham. It was here that the New Cross Fire took place in 1981, ending the young lives of 13 Black children. I used to walk past that very site with many of my friends, discussing what had happened. Darcus Howe, initially a member of the Black Panther Party in UK, was not a Muslim but he must have studied the Black Panther Movement and realised that Rap Brown – now known as Imām Jamil Al Amin – and others in the Party were Muslims. In fact, the party’s inception was inspired by the great Muslim and martyr, Malcolm X. He also led the march in the London Borough of Lewisham against the far-right National Front in 1977 which later became known as the iconic ‘Battle for Lewisham’. At this time I was still a young child in the borough but memories of this march still resonate with me.

On the 1st of April 2017, Darcus Howe passed away at the age of 74. Even though Darcus Howe was not a Muslim he, like Ahmed Kathrada, understood the Islamic doctrine that a proper balance-of-evils analysis, that takes into account the utmost importance of realising justice, will favour withstanding the harms of resistance until the tyranny and oppression which has paralysed a people is completely eliminated.

As an Imām and community member in the London Borough of Lewisham today, I feel we must remember these two iconic leaders. We must also understand that standing up to injustice, oppression and racism is not only part of a Muslim’s faith but the duty of a Muslim. Anytime I think of a minority community whose physical and mental integrity, life and safety are under threat, I think of the struggles of the Anbiyā (ʿalayhim al-Salām), the blessed Messenger of Allāh (sall Allāhu ʿalayhi wa sallam) and of his companions as they were always the minority community made out to be enemies of the state by the tyrannical, oppressive authorities of their respective times. It is for this reason that when I think of the marches and demonstrations these two men attended in the face of violence I think of when ʿUmar (raḍiy Allāhu ʿanhu) embraced Islām and how he urged the Messenger of Allāh (sall Allāhu ʿalayhi wa sallam) and the Muslim community to proclaim their noble cause in broad daylight in front of the Quraysh.

As Muslims living in precarious times we have much to learn from the struggles of these two great individuals who were, at the time, despised and hated. They were able to mobilise and effectively carry out non-violent protests to demand equal rights, a level playing field and, above all, the right of dignity and respect.

They made sacrifices that required courage in the face of tyranny and steadfastness in the face of populism. Though they were scorned in their struggle for justice they never abandoned their cause. The beauty of forbearance and sacrifice of activists like Ahmed Kathrada and Darcus Howe have attracted people of all races to the cause, just as the self-control, restraint and tolerance shown by the Messenger of Allāh (sall Allāhu ʿalayhi wa sallam) and the early generation of Muslims encouraged many to embrace Islām.

In remembering both Ahmed Kathrada  and Darcus Howe we remember that in Lewisham we have a history of standing up against those who would like to create hate and division.

Allāh Almighty states in the Qur’ān,

“O you who have believed, be persistently standing firm in justice, witnesses for Allāh, even if it be against yourselves or parents and relatives. Whether one is rich or poor, Allāh is more worthy of both. So follow not [personal] inclination, lest you not be just. And if you distort [your testimony] or refuse [to give it], then indeed Allāh is ever, with what you do, Acquainted.”[1]

We are told that the great Prophets of our past, Ibrāhīm, Mūsā, ʿĪsā and Muḥammad (ʿalayhim al-Salām), stood up against the oppression and injustice of their times, be it from Nimrod, Pharaoh, the Romans or the Quraysh. With this in mind, let us not be paralysed by fear in speaking the truth, enjoining the good, calling to what is right and demanding our rights.

Some words of the Prophet Muḥammad (sall Allāhu ʿalayhi wa sallam) that always inspire me are:

“The greatest form of Jihād (struggle) is to stand-up against a tyrant.”[2]