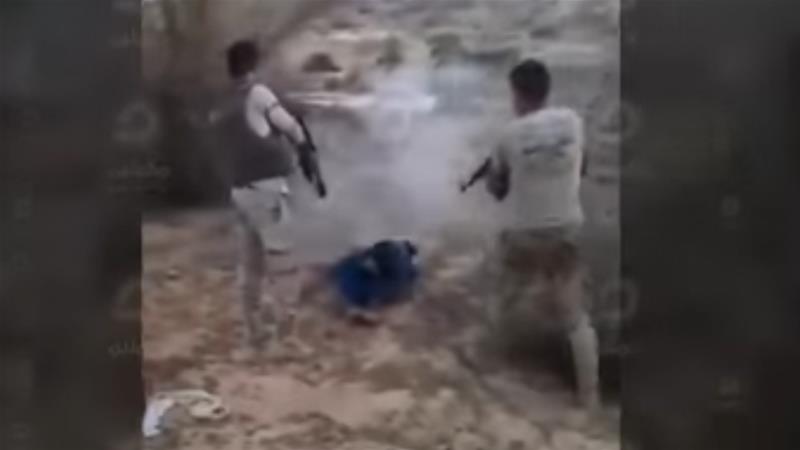 The Egyptian army has been accused of carrying out extrajudicial killings in Sinai province, with a leaked video purportedly showing soldiers executing detainees and then staging the event to make it appear as if they died in a gun battle.

The video, which was posted online on Thursday by Mekameleen, an opposition TV channel based in Turkey, allegedly shows two blindfolded men being shot in the head by uniformed soldiers.

In the video, one young blindfolded man is aggressively questioned by the officers who ask him if he is a member of the Abu Sanana family.

When he responds “No” and says he is from al-Awabadah, they then ask him where his grandfather lives before forcing him to the ground and removing his blindfold.

One of the soldiers then shoots him in the head.

A person off-screen can be heard repeatedly shouting “Not just the head” as a second soldier then fires at the body on the ground.

Al Jazeera cannot independently verify the video and the Egyptian government has barred journalists from reporting on events in the troubled Sinai Peninsula.

The video appears to depict part of a raid that the Egyptian army posted on social media on December 6.

That post included photos of three men in a field with guns next to them, who had been “killed in a raid” on an explosives storehouse.

“In the video, we see executions of unarmed people by forces wearing military uniform,” he said.

“They are being shot in a direct way. International law considers this a war crime that clearly has to be investigated.”

“It’s important that the military call for an independent and impartial investigation in order to clear their name and reputation,” he said.

“The political leadership needs to take the reigns of the military. For the past few years they’ve been acting like a runaway train. Actions such as this endanger social peace in the region and could accelerate growing calls for Sinai to seperate.”

Last month, Human Rights Watch accused Egyptian forces of executing at least four men in January 2017 as they struggle to fight a local affiliate of the Islamic State of Iraq and the Levant (ISIL) group.

It said the killings appear to fit a pattern of abuse against civilians by both military and internal security forces who have been deployed to Sinai.

Human Rights Watch said in a Friday statement other videos and photographs it has reviewed corroborate the latest incident.

“These outrageous killings confirm that Egypt’s counterterrorism campaign in the Sinai is out of control,” said Joe Stork from the group’s Middle East division. “Egypt’s allies cannot claim ignorance about these deadly abuses.”

Egypt has for years been battling an armed movement in the rugged and thinly populated Sinai Peninsula. The offensive has gained pace since the military overthrew democratically elected president  Mohamed Morsi  of the  Muslim Brotherhood  in mid-2013.