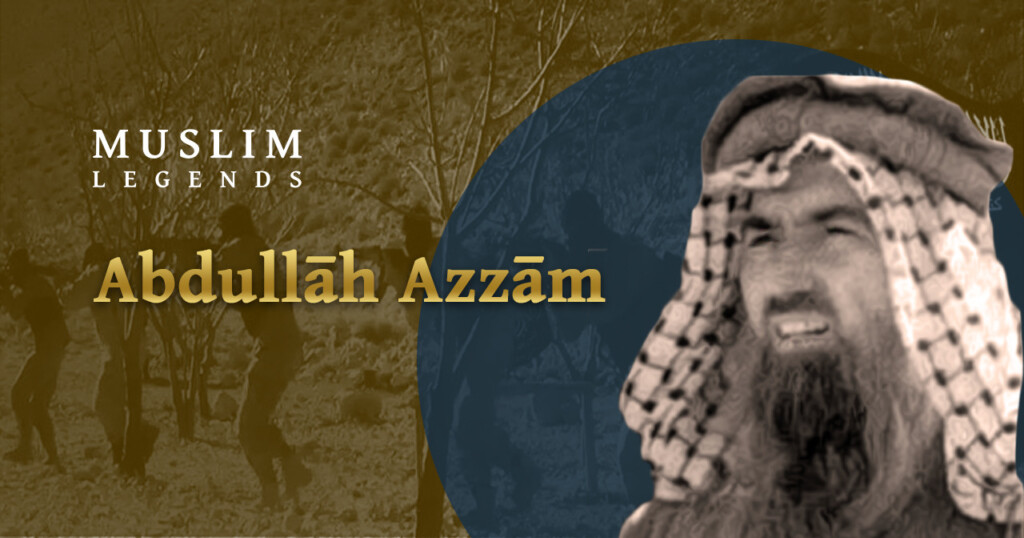 “The Muslim Ummah lives by virtue of the ink of its scholars and the blood of its martyrs. What is more beautiful than the writing of the Ummah’s history with both the ink of a scholar and his blood, such that the map of Islamic history becomes coloured with two lines: one of them black, and that is what the scholar wrote with the ink of his pen; and the other one red, and that is what the martyr wrote with his blood. And something more beautiful than this is when the blood is one and the pen is one, so that the hand of the scholar which expends the ink and moves the pen, is the same as the hand which expends its blood and moves the Ummah. The extent to which the number of martyred scholars increases is the extent to which nations are delivered from their slumber, rescued from their decline and awoken from their sleep.”

These words were written by Dr Sheikh Abdullāh Yusuf Azzam, a Palestinian scholar who, according to Time magazine, “was responsible for reviving Jihad in the 20th century.”

The concept of Jihad – Muslims engaged in armed struggle to defend themselves – was not something new in the 20th century. The Arab-Israeli conflicts, the partition of India-Pakistan, the Muslim Moro inhabitants of the Philippines, and many others – all of these were conflicts in which local Muslims fought their aggressors to defend their lives, families, properties, and religion.

But this changed one Monday morning in December 1979 – a day that would change the future of Muslims all over the world. On 24th December 1979, the Soviet Union invaded Afghanistan in its quest to install a communist regime in the country.

Only, it seems that nobody had told the Soviet President Leonid Brezhnev of the number one rule of foreign policy: “Don’t invade Afghanistan.” The British had learned this rule by painful experience through the three Anglo-Afghan wars in the preceding century.

The Afghan Muslims declared a Jihad against the Soviet Union and began to fight back. During that time, Sheikh Abdullāh Azzam was a lecturer at the International Islamic University in Islamabad, just across the border from Afghanistan. He visited Afghanistan, and what he saw enraged him.

Simple Afghan farmers and tribesmen, with sandals on their feet and World War I rifles (captured from the British) in their hands, were putting up fierce resistance against one of the world’s superpowers.

Sheikh Abdullāh Azzam began to rally Muslims around the world to come to the aid of their oppressed Muslim brothers in Afghanistan. He left his job and established a full-time office in Peshawar. From this base, he travelled around the world, from the Middle East to Europe to America, raising money for the Afghan Jihad and encouraging young men to travel to Afghanistan to help expel the Soviet invaders.

He wrote books, issued fatāwa, and delivered lectures. He told stories of martyrs and miracles on the battlefield – eyewitness accounts of the bodies of martyrs smelling of musk, and captured Soviet prisoners describing “flying horsemen” (angels) attacking them.

Muslim men from around the world began to respond to the call, as Sheikh Azzam described:

“The Jihad initially began as a few drops, until Allah decided to ignite the sparks within this blessed people and explode the Jihad, blessing with it the land of Afghanistan and the rest of the Muslims until its good encompassed the whole World. Some thought that the Earth had become devastated and that this Ummah had been drained of the thirst for martyrdom. Therefore, Allah exploded the Jihad on the land of Afghanistan and groups of youths from the Islamic World marched forth to Afghanistan in search of Jihad and martyrdom.”

From South Africa to North America, and from Canada to Japan, young Muslim men from every corner of the globe began to travel to Afghanistan to face a world superpower.

For the first time since the fall of the Ottoman Caliphate, Muslims travelled to another country for the purpose of Jihad. This was not just a local group of Muslims in one area defending themselves; this was a global coalition of believers.

“Indeed the involvement of the Muslims in the battle, from a variety of races, woke up those that were asleep and enlightened those who were absent-minded. Furthermore, it shook the oppressors, for indeed the enemies of Islam were watching the arena and counting the lives. The involvement of non-Afghans in the battle was a great source of alarm and dismay to them…”

Years went by, and the war dragged on. The tide turned, and the Soviets began to suffer heavy losses. The number of foreign martyrs increased.

“The enemies were also aware of the volatile risks associated with the burial of a foreign volunteer fighter in the soils of Afghanistan, as if to announce to the World: that this Dīn requires millions of such sacrifices in order to change its situation, and that these sacrifices must meet with this fighter, here in his resting place, so that the bullet alone is considered to be the honour of this Dīn, the resistance of the Muslims and the pride of the believers.”

On 15 February 1989, nine years after they first invaded, Soviet troops made a humiliating withdrawal from Afghanistan. In the words of the then-Soviet President Gorbachev, Afghanistan had become “a bleeding wound”.

The Soviets left behind a communist regime, which the Mujāhidīn continued to wage Jihad against. Nine months after the Soviet withdrawal, Sheikh Abdullāh Azzam (along with his two sons) was assassinated on 24th November 1989 by a car bomb while on his way to Friday prayers in Peshawar, Pakistan.

The ink of the scholar had mixed with the blood of the martyr to scribe a new history for the Muslim Ummah.

After Sheikh Azzam’s assassination, Jihad went global. The foreign Mujāhidīn warriors who had defeated the Soviet Union went to help their Muslim brothers and sisters under attack in Bosnia, Tajikistan, Kashmir, Chechnya, the Philippines, Myanmar, Kosovo, and many other lands.

But some of these warriors began to divert from the teachings of Sheikh Azzam. They began to kill innocent people and claimed it was Jihad. The civil war in Algeria in the 1990s saw entire villages of women and children slaughtered to death in the name of ‘Jihad’.

European tourists in Egypt were bombed as they were on holiday. American missionaries were kidnapped and killed. All of this was done in the name of ‘Jihad’.

Throughout Islamic history, innocent people have been killed by Muslims in war. In some cases, they were killed by mistake, while in other cases, it was due to the actions of rogue soldiers. However, targeting innocent civilians as policy and strategy under the banner of ‘Jihad’ never happened in Islamic history until around 1991, with the civil war in Algeria and insurrection in Egypt.

Sheikh Azzam had once said, “Killing innocent women and children leads to hatred for generations.” He was strictly against harming innocent civilians in the name of Jihad. The Prophet (sall Allāhu ‘alayhi wa sallam) and his Companions had strictly forbidden this, so why should Sheikh Azzam believe and do something different?

With regret, the actions of some Muslims have soiled the reputation of Jihad today. The concept has moved from a noble and selfless war to defend oppressed peoples from tyranny, into a tool used to rape, kidnap, torture, and kill both Muslims and non-Muslims.

When it came to Jihad, Sheikh Abdullāh Azzam was virtually untouchable and unmatched. None of the Jihad group leaders and scholars who have justified attacks on innocent civilians since 1989 would come close to Sheikh Azzam’s credibility and integrity.

However, the wrong actions by a few people for the past 30 years cannot wipe out 14 centuries of the glorious and noble concept of Jihad, which was first waged by the Prophet and his Companions, as Sheikh Azzam described:

“History does not write its lines except with blood. Glory does not build its lofty edifice except with skulls, Honour and respect cannot be established except on a foundation of cripples and corpses. Empires, distinguished peoples, states and societies cannot be established except with examples. Indeed those who think that they can change reality, or change societies, without blood, sacrifices and invalids, without pure, innocent souls, then they do not understand the essence of this Dīn and they do not know the method of the best of the Messengers (may Allah bless him and grant him peace).”

Abdullah b. Adam is a member of the Muslim community in the UK. He participated in Jihad in various countries in the previous century. Although he is a free man today, he was imprisoned in the chaos following 9/11 when the mainstream Islamic notion of Jihad was hysterically conflated with terrorism and attacking civilians.