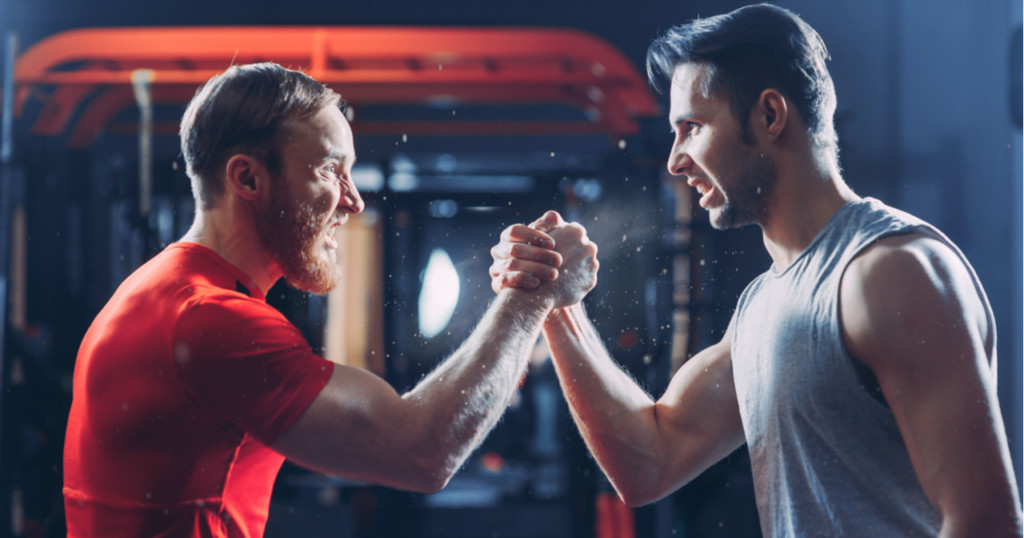 In a well-known hadith:

“The strong believer is better and more beloved to Allāh than the weak believer; and in both there is goodness.

Strive for what will benefit you, seek assistance from Allāh and do not give up.

If something were to afflict you, do not say, ‘If only I had done this, such and such would have occurred’, but say, ‘This is the decree of Allāh and whatever He wills He does,’ since ‘if only’ unlocks the work of Shaytān.”[1]

Extracts of this hadīth are frequently quoted in different contexts and various lectures. Yet if one were to take it as a whole and reflect over its meaning, a number of amazing benefits and lessons can be drawn, all of which ultimately guide the believer towards building a positive mindset.

Let us divide this hadīth into three sections and consider some of the lessons on offer from each division. We will then piece all of the sections together.

“The strong believer is better and more beloved to Allāh than the weak believer; and in both there is goodness.“

Here we learn that Allāh ranks the believers according to their strength of īmān, holding some to be better than others and, indeed, loving some believers more than others.

Simply being aware of this should be encouragement to develop and excel in our level of īmān throughout our lives. Who would not want to be more beloved to Allāh? We may have ups and downs in life and likewise in our īmān, but the believer should constantly be striving to become stronger in faith. This narration makes it clear that that it is īmān (in its comprehensive understanding) that determines a person’s status with Allāh.

This is further emphasised in Sūrah Al-Hujurāt, where Allāh says:

“Indeed, the most noble of you in the sight of Allāh is the most righteous of you.”[2]

However, the Prophet (sall Allāhu ‘alayhi wasallam) concluded this particular part of the discussion by reminding us that, regardless of one’s strength or level of īmān, simply being a believer means that Allāh judges you to be good and to contain goodness within you. It is as if to say that it does not matter where you are in your spiritual journey – Allāh knows that there is ultimately good in you, so remain hopeful and keep working towards self-development.

Strive for what benefits you – and do not give up!

“Strive for what will benefit you, seek assistance from Allāh and do not give up.“

Firstly, the call for believers to strive for what brings them benefit is a command from the Prophet (sall Allāhu ‘alayhi wasallam). We must therefore act upon it and may be blameworthy if we do not.

One may ask: what is benefit? Simply put, it is anything that secures the believer with a better Hereafter. The list of benefits is potentially endless, depending on the intention of the believer when carrying out the task. Benefit can be derived from working (to provide for one’s family and give in charity), exercising (to look after one’s health), studying (to gain useful knowledge and implement it or pass it to others), volunteering, or anything else that is ultimately intended to please Allāh alone.

Note, however, that anything that harms one’s Hereafter can never be considered beneficial under any circumstances.

To ‘strive’ is of course not the same as to ‘do’. Striving requires constant effort and a pro-active approach to make something happen, regardless of the obstacles one may encounter. Striving also requires a willingness to regularly go outside of one’s comfort zone.

This leads to the next call in this section, which is to seek assistance from our Creator. The believer understands that nothing is possible without the will and help of the Creator. We rely upon Allāh for every single thing. From the air we breathe, the food we eat, even to the action required to lift a finger to tend to an itch – there is nothing we do without His help. If we are striving to achieve something, it is only natural that we would actively seek His help in doing so.

The last part of this segment is the natural conclusion of striving and seeking assistance: do not give up. Do not throw in the towel in despair. This is different to being pragmatic and applying a bit of wisdom as to when one ought to reset certain targets depending on circumstances.

Know that to give up – after striving and seeking Allāh’s assistance – is to effectively show that one is not convinced that Allāh’s help will actually arrive. This is a very dangerous path to tread. Hence, it is always blameworthy to give up and despair. The very fact that the Prophet (sall Allāhu ‘alayhi wasallam) commanded us to avoid despair shows that we have been given the means and capability to persevere in times of apparent failure.

The last part of the hadīth is:

“If something were to afflict you, do not say, ‘If only I had done this, such and such would have occurred’, but say, ‘This is the decree of Allāh and whatever He wills He does,’ since ‘if only’ unlocks the work of Shaytān.”

Facing calamities and experiencing undesired outcomes is part of the vicissitudes of life. We all face situations of varying degrees of difficulty at different points of our lives. This is the decree of Allāh. As He says in His Book:

The final segment of this hadīth teaches us how to react when we face such circumstances. We should never look back dwelling over the past in such a way that we feel demotivated, saying “if only I had done this or that in a different way.” Such an attitude renders one incapacitated and unable to move on, and this approach is never healthy.

This is different to productive self-reflection. Learning from past experiences in order to improve and avoid repeating the same mistakes is a fundamental part of learning and self-growth.

Facing afflictions after having planned and strived for a certain result is only a reminder that it is Allāh alone who determines outcomes. Everything is entirely in His Hands and everything happens according to His infinite knowledge and wisdom. To dwell on the past or to give up when faced with hardship implies a lack of wisdom in the decree of Allāh.

Hence, the hadīth teaches us that the correct reaction should be to say, “This is the decree of Allāh, and whatever He wills, He does.” The heart should also be content with this. To remember this statement and say it with certain belief is to affirm to yourself that Allāh knows best for you, and that whatever has happened was already decreed out of His wisdom.

One of the most important lessons from this part of the narration is to recognise that we, as mere humans, cannot fathom the wisdom behind many of the calamities we face; there is often no need to. Rather, we should focus our attention on recovering, responding, and moving on from these calamities.

The strong believer is pleased with what is decreed as there will always be opportunity for self-growth and elevating one’s status with Allāh. As some of the salaf have mentioned, we deal with hardships firstly with patience; this is the lowest level. This is then followed by being content with the hardship. The highest level, and that of the true strong believer, is to be grateful for the hardship – grateful for what can be learnt, grateful that one was able to attain reward for their positive reaction, and grateful that it did not affect one’s belief and that the calamity could have been worse.

The segment ends by reminding us that dwelling over the past and thinking ‘if only’ unlocks the work of Shaytān. In other words, it opens the door for Shaytān to whisper more – telling the believer to give up, that it’s not fair, you are not worthy of it, you should have known better, what is the wisdom in this. The Shaytān leads the believer to stagnation and giving up, depression and mental breakdowns, and even towards kufr.

Whilst it may seem a little extreme to suggest saying “if only I had done such and such” can lead to disbelief, consider the mindset of the one who has met failure in a noble goal, or the one who faces a marriage breakdown or a family death. The many negative thoughts going through their mind provides Shaytān – lurking in the background and waiting to latch on to such thoughts – with the opportunity to take the believer down a dangerous path.

Depression can make a person incapacitated, struggling to find the will to perform their obligatory prayers. The person harbours dangerous and negative thoughts about the One who provides – the One who knows and decrees only what is best for them.

The hadīth warns us that this faulty reasoning must be avoided at all costs because it is far too risky on one’s īmān.

Bringing it all together

Having broken this hadīth down into three separate sections and discussed each on its own, it’s worth reminding ourselves that this was in fact all one statement to be understood comprehensively. Amongst the many lessons mentioned, one may wonder: what is the underlying take-home message?

One view is that, ultimately, this hadīth is teaching the believers to build positive mindsets and avoid the pitfalls of negativity.

In short, we are taught that the strong believer is more beloved than the weak one. Therefore, one should strive for what benefits and helps attain strength. But one should do so relying upon Allāh alone and, of course, never give up on such an endeavour. If one faces an obstacle or seems to fail, one should not allow “if only” to pollute the heart and mind. This statement should not affect one’s  good assumptions of Allāh, but rather reaffirm that He is in control of affairs and that He knows best.

By reflecting over this powerful hadīth and remembering its core message and many lessons, it only re-emphasises that the Sharīʿah wants believers to be productive and positive in all beneficial endeavours, and certainly recognises and promotes the need to look after one’s mental well-being.

We ask Allāh to make us of those who follow the teachings of this hadīth and to be from amongst the strong believers. Āmīn.