Is Anti-Muslim Prejudice an Election Issue? 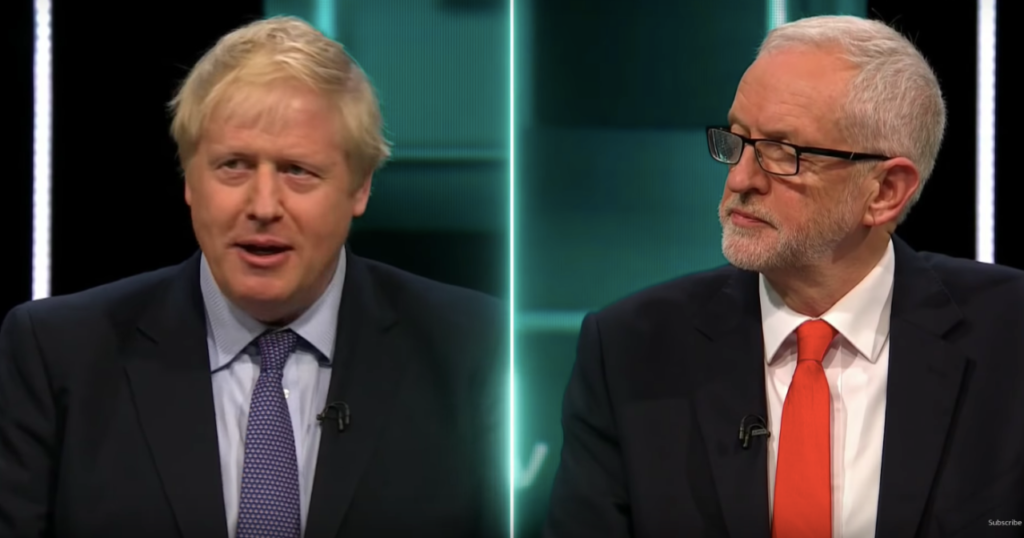 Last night saw the first election debate between Boris Johnson and Jeremy Corbyn. Predictably, questions were asked about Brexit, the NHS, and the economy. On the issue of personal integrity, the chairperson of the debate rightly presented to Mr Corbyn his party’s failings on dealing with anti-Semitism and cited statements from the Board of Deputies – the main representative of British Jews.

However, when addressing the Prime Minister, there was no mention of anti-Muslim prejudice in the Conservative Party and the party’s refusal to hold an enquiry into the issue, which has been called for by the Muslim Council of Britain. Nor was the current leader of the Conservative Party questioned on Ryan Houghton, who had been a Conservative candidate until his Islamophobia and Holocaust denial were exposed.[1] Mr Johnson was not questioned on the former Conservative Mayor of Medway, Steven Iles, who posted a picture of a bacon sandwich with the caption “I am proud to be English” – the obvious inference being that Muslims who do not eat pork are somehow less English.[2]

Mr Johnson was not challenged either on Bob Blackman MP who had re-tweeted an anti-Islam message from notorious Islamophobe, fascist sympathiser, and criminal Tommy Robinson.[3] Mr Johnson was not asked about Anjana Patel, candidate for Brent North, who has been involved in a recent Islamophobia scandal. The Conservative candidate appeared to suggest that Malala Yousafzai was somehow responsible for the actions of what appeared to be her co-religionists. In a tweet which has since been deleted, Ms Patel asked: 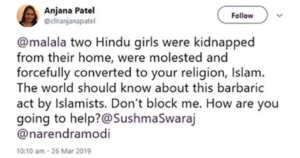 The Muslim Council of Britain commented:

“The Conservative Party, with its long-held issues of failing to address and tackle Islamophobia within its ranks, now appears to have resorted to outright hiding the racist views of one of its prospective parliamentary candidates.

Anjana Patel’s tweets to Malala Yousufzai were hideously Islamophobic, offensive and not acceptable under any circumstances. The fact that the Conservative Party still endorsed her, despite apparently being fully aware of her racism, is disappointing but not surprising.”[4]

Quite why Ms Patel also included Narendra Modi, who was governor of Gujarat during the bloodshed of 2002 in which thousands of Muslims were killed, has not been explained.

“Islam: come for the infidel-killing, whore-stoning, religious purity, stay for the terrific falafels.[5]”

Sayeeda Warsi, who has led the campaign to call out anti-Muslim prejudice in the Conservative Party despite stern criticism from her own party, commented on the ITV debate:

Shame @itvnews didn’t feel it appropriate to raise the issue of racism within both parties.
This selective approach to racism is in the end bad for all of us. https://t.co/P2fVGXqj1Y

Many social media commentators have suggested that Jeremy Corbyn’s Labour Party has a long track record of combating racism in all its forms, including against the Muslim community. Indeed, during the debate, it was clear that Mr Corbyn wanted to bring the country together and heal wounds. Mr Johnson, on the other hand, seemed fanatically obsessed with Brexit and completely out of touch with the issues that affect ordinary people, such as food banks and other social injustices.

Let us not forget: Johnson’s “oven ready” Brexit plan will likely take another 7 years of negotiations that heavily redacted papers have shown include conversations between British civil servants and the Trump administration, particularly in relation to the NHS.

The difference in character between the two was made apparent when Corbyn said “everyone you meet teaches you something new,” whilst Johnson revealed his narcissistic traits by stating he would give a Christmas present of the Brexit deal.

Commentators have suggested that the way for the Muslim electorate to make itself heard and bring its priorities to the fore is to make its presence felt by voting in the upcoming elections. The deadline for registering to vote is next Thursday, November 26. There is near consensus that the upcoming elections are the most important in our lifetime. Make your voice heard: register to vote.