The Uyghurs Invited Islam21c to Istanbul to Give You a Message 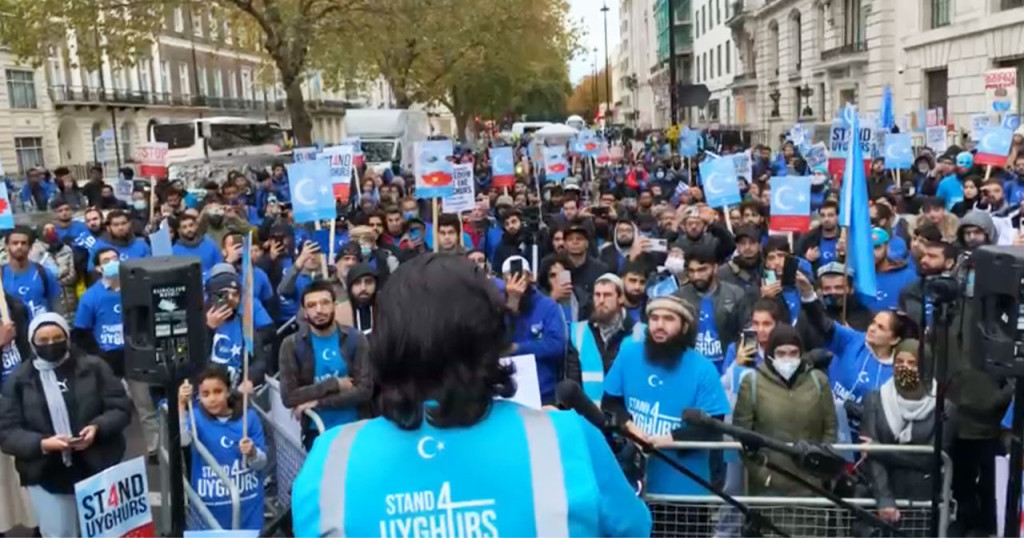 I wanted to wait until I got back into the country safely to write this. Over the weekend a colleague and I were invited to moderate an international roundtable meeting called The Global Muslim Response to the Uyghur Crisis. It was attended by brothers and sisters from many different countries, with over 50 NGOs invited. We met members of ulama councils, political party representatives, and the twin blessings of seasoned, veteran activists as well as innovative and dynamic youth activists.

Perhaps what was more humbling and inspiring was meeting our Uyghur brothers and sisters from various locations. We had breakfast in a café run by Uyghur widows (some of whose husbands are in concentration camps, not knowing whether they are still alive). We broke bread with the union of ulamā’ of East Turkestan in exile from their homeland. We were driven around town by young leaders of their movement. We toured and filmed in their burgeoning media organisations. We were kindly invited to speak at their events. But the thing that was embarrassing for us, was how grateful they were for what little we have done for their cause so far.

The Chinese Communist Party (CCP), in its torture and anti-Islamic indoctrination, has always pushed to separate Uyghurs in occupied East Turkestan (which it calls Xinjiang— ‘new colony’) from the rest of the Ummah. This is compounded by the understandable emotion of being forsaken by your brethren, which Shaytān exploits. However, when those Uyghurs saw the waves of their non-Uyghur brothers and sisters in the UK from 50+ Muslim organisations in the Stand4Uyghurs coalition,[1] shouting unmistakably Islamic chants to show them solidarity in front of the Chinese Embassy, they could feel the rotten threads of the CCP narrative fraying.

As one young sister whose whole family was put into Chinese concentration camps struggled to put it in a language we could understand, fighting back tears: “I felt very…not-alone.”

Just like the smiles on the beaming faces of the Uyghur children at the demonstration shouting takbīrs with their fellow Muslims (the same dhikr that would have them and their families put into concentration camps in their occupied homelands), likewise the tears of a bit of moral relief of our brothers and sisters elsewhere that “the Ummah has NOT forgotten us” will continue to serve as a poignant motivation for me personally, if Allah wills.

The roundtable meeting gave us all an opportunity to showcase what we have been attempting to do in our countries thus far and present ideas for future activities to help stop the Uyghur genocide, from social media campaigns to cultural production to UN resolutions and in-between. Looking at the sheer breadth of the types of activities, ideas and range of expertise was an inspiration itself, but I would like to share a few brief lessons I have been reflecting on.

Real change is not what gets clicks

Seductive rhetoric may sound nice, but it rarely has practical results. Funnily enough real change, if you reflect on it, tends to happen in more “boring” ways. The cult of heroism in history books is part of the problem. We are taught that Malcolm X did this, or Salahuddin did that (Allah have mercy on them). But they were simply the tip of an iceberg that did not make it into the history books—perhaps by those who want us to ignore the real change-makers, a cynic may say.

They are the people who hired the coaches, put up posters, canvassed door-to-door, stood in the rain handing out leaflets. They are the unnamed soldiers with whose devout worship and disciplined steadfastness on the battlefield the day was won. It does not come with worldly glory, but Allah knows who they are. If anything, they are potentially superior in the sight of Allah than those whose sincerity was tested by getting the credit for change. The Prophet (peace and blessings be upon him) is reported to have said:

“Allah will admit three people into paradise due to the same arrow: the one who fashioned it with good intent; the one who shot it; and the one who collected it.”[2]

Slow, gradual, hard work has become anathema to the modern social media-informed, Uber Eats-fuelled, Amazon prime-ordering, fatwa-Googling generation of Muslims (of which I am absolutely part of myself). We automatically tend to belittle work whose results we don’t see within our horizon, and easily shoo away slow, sustained, gradual change as somehow a waste of time.

We allow ourselves to do this because we have the comforting distraction that we’ll “work” for some big and exciting change that is so far in the distance that the most we can do right now is just talk about it. Thus, we conveniently absolve ourselves of the obligation to do the multitude of practical deeds that are within our reach, that may not make a seismic shift but move us in the right direction nonetheless.

I met veteran campaigners who carried out crucial work to highlight and take steps to end the Bosnian genocide, for example, but could not help but wonder if we in today’s climate would have the same patience to start something that would take a decade to bear fruits.

The Ummah is amazing

There is immense goodness in the Ummah, by the grace of Allah. Seeing so many diverse faces and projects reminded me of just how powerful the mere sense of Ummah is. Even in many of those who don’t appear to be Muslim outwardly, the ‘izzah (honour, strength) of Islam and Ummah burns brightly within them when push comes to shove and people need help.

The Ummah is bigger than our group. If we think bigger than our local mosque politics or latest online scandal then we will think and act big. One thing our beloved murabbi Sh Haitham al-Haddad always tells us when he sees us is that we should literally hang up a map of the world in our workspaces.

Even when your gaze is diffused away from your locality for a moment, you automatically start to put things into perspective more. Even though you might be suffering the tedium of responding to some Islamophobic politician or commentator here, you catch a glimpse of being part of a massive global body.

You also remember that there are so many causes out there and so many problems that need solving. Suddenly your own minor problems seem trivial, and you are inspired to make some impact on any number of the opportunities out there.

Good deeds have a return on investment

This is a delicate matter because you do not want to limit your view of success to material targets. After all, if success meant followers, then our master the Prophet Nūh (‘alayhī al-Salām) would not have been called one of the greatest Prophets and Messengers. But there is a subtle point that needs to be remembered when we use examples like these: he did not have few followers for want of trying; rather despite it. He was striving for literally centuries with the intention of having an impact on his people.

It is only after sincerely working and exhausting your efforts that you can rest assured that not achieving the intended outcome is better for you, as per Allah’s wise decree. This should not be invoked before spending effort towards an intended goal; used to excuse laziness or poor strategic planning.

The realm of enjoining good, forbidding evil, calling people to Allah, and so on, is inextricably linked to both servitude to Allah as a moral test, and to empirical causes and effects. It is true for example that you cannot open someone’s mind to Islam, but you can ensure that you are delivering the message in a way which is effective and can be assessed.

If you find yourself thinking, “But wait, it is ‘ibādah, and we’re doing it for Allah anyway, so even if we don’t achieve x we will still be rewarded by Him,” ask yourself this question: would I accept a low return-on-investment for my business? After all, doing business in a Halal way is also ‘ibādah and rewardable by Allah, right?

Allah is the One that has commanded us to have lofty aspirations and to strive hard with excellence. Just like the Prophet (peace and blessings be upon him) prioritised changing an evil with your hand over changing it with your tongue, it follows that we should be on the lookout for the most effective opportunities to change an evil using whatever means and resources we have at our disposal, and not be complacent.

Muslims have a lot of power

We are a sleeping giant, and I can only imagine what greatness our future generations can be primed for if they are given the right direction and foundations. We need leadership, strategic thinking, and inter-generational knowledge and skills transfer—none of which can be effectively achieved without unity and cooperation.

This is why I am delighted and privileged to be part of tarbiyah programmes like Sabeel,[3] where brothers and sisters are nurtured upon these very principles to bring about some positive change in ourselves, our societies and the Ummah at large by the permission of Allah. It is truly a blessing to be able to work in this area; I cannot imagine any other profession where within the span of a few weeks I can go from editing an Islam21c article about theology, to meeting Yemenis in a refugee camp,[4] to attending demonstrations and meetings about Uyghurs,[5] to going to court against the government for Islamophobic policies,[6] and more.

That is why I am eternally grateful firstly to Allah, then our murabbis for investing in us and in turn inspiring us to invest in others. May Allah overlook all of our many shortcomings and give us the tawfīq to strive harder.