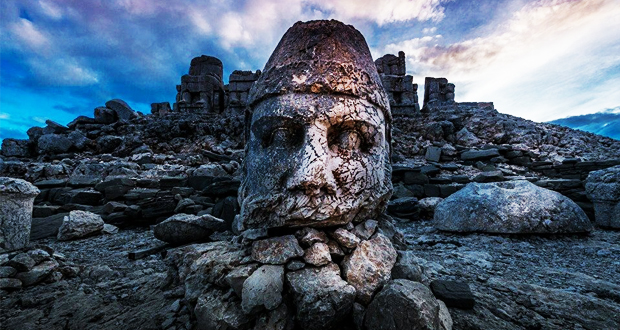 In a corner of Kensington Gardens in London stands the statue of a playful young boy, the fictional character of Peter Pan. The bronze sculpture, commissioned by the author himself, depicts the central character on top of a tree stump decorated with woodland creatures and fairies, seemingly clambering up to see Peter Pan. The classic children’s novel tells the story of ‘the boy who never grew up’ and the statue has been on display for over 100 years. I wondered if this was the fascination with statues: to immortalise the real and the imaginary, the mundane and the extraordinary, the simple and the ostentatious. The city of London itself has a vast array of public art: an open gallery of works, from the austere to the whimsical. What were the reasons behind their construction? Why has man sought to preserve the memory of certain individuals by forging their image in stone and what is the Islamic perspective on making statues?

Initially the building of statues arose out of cult practices and pre-Islamic Arabia was no different: There were at one time 360 statues or idols within the confines of Makkah. Bukhārī recorded how Ibn Abbas listed the names of some of the idols of the people of Nūḥ (ʿalayhi al-Salām), adding that:

‘These were names of righteous men from the people of Nūḥ. When they died, the Shayṭān inspired their people to set up idols in the places where they had used to sit, and to call those idols by their names. They did that but they did not worship them, but after those people died and knowledge had been forgotten, then they started to worship them.’[1]

This statement describes one of the great dangers of ascribing iconic status to celebrities: that of being idolised as objects of veneration, especially if the figure is part of popular culture. Gautama Buddha did not assume divinity for himself but the sheer size and scale of some of the most famous statues of him are testimony to the fact that his followers have ascribed superhuman qualities to him. The Qur’ān relates the story of Ibrāhīm (ʿalayhi al-Salām) questioning his people of their worship of statues:

When he said to his father and his people, “What are these statues to which you are devoted?”[2]

The only answer they could give him was the feeble excuse that they were just following the tradition of their ancestors (interestingly this is the same reason given by the pagan Arabs).

Allāh (subḥānahu wa taʿālā) has commanded believers to worship Him alone and the gravity of the sin of shirk has been repeated many times in the Qur’            ān. Luqmān instructs his son not to associate anything with Allāh, for this association is a ‘great injustice’.[3] When we are dependent upon The Creator for everything in this life and beyond, how can we give credit to another or even ourselves?

Memorial to a political figure or event

The image portrayed by the statue is often at odds with the character of the individual. The Happy Prince by Oscar Wilde is a fable of the statue of a dead prince who now, stood on a pedestal, can see into the lives of his people and sympathise with them, which he was unable to do while alive.

“When I was alive and had a human heart,” answered the statue, “I did not know what tears were, ……So I lived, and so I died. And now that I am dead they have set me up here so high that I can see all the ugliness and all the misery of my city, and though my heart is made of lead yet I cannot chose but weep.”

This is a poignant reminder of the fate of the disbelievers at the time of the final reckoning when they will plead with Allāh (subḥānahu wa taʿālā) to return them to their life in this world to live as believers, but it will be too late for them,

‘But if they were returned (to the world), they would certainly revert to that when they were forbidden. And indeed they are liars’[4][i]

To impress fear and authority

Colossal statues of Stalin once peppered the Soviet landscape, until they were sent crumbling down by his own countrymen. One of my favourite poems is ‘Ozymandias’ by Percy Shelley. A huge, broken statue depicts the image of a proud ruler:

‘My name is Ozymandias, King of Kings: Look on my works, ye mighty, and despair!’ Nothing beside remains.`

What is the use of being so haughty and arrogant when your wealth and power will not last forever? The Prophet (sall Allāhu ʿalayhi wa sallam) is reported to have said,

“One will not enter Paradise, if one has an atom’s weight of arrogance in his/her heart.”[5]

Arrogance is a satanic trait and it was the reason for the downfall of Ozymandias. Also, no matter how much you amass of material possessions in this life, it will come to nothing. This life is transient and finite. The Prophet (sall Allāhu ʿalayhi wa sallam) encouraged his followers to:

However, many think otherwise and a stamp of immortality is placed on each new statue.

How the Christian Church licensed the making of religious statues

The Ten Commandments explicitly says that ‘Thou shall not make a graven image of God’. The Old Testament forbids idol worship and making images of God:

Exodus 20:4 says, “You shall not make for yourself an idol, or any likeness of what is in heaven above or on the earth beneath or in the water under the earth.”[7]

However, Christians claimed divinity for Jesus and so the lines between man and God were blurred. Catholics in particular justify their view by saying that paintings and statues celebrate the beauty of the religion as opposed to influencing the adherents of the faith to worship these man-made images. They also claim that statues help Christians to focus on the person of Christ and thereby follow his teachings.

Somebody once said that a person dies two deaths: one when he is buried and one when he is no longer remembered in the hearts of his family and friends. Alḥamdulillah, the legacy of the Prophet (sall Allāhu ʿalayhi wa sallam) will, inshāAllāh, remain in our hearts forever. The righteousness of a believer is not demonstrated through the veneration of the physical image of the Prophet (sall Allāhu ʿalayhi wa sallam) but in the way a he tries to emulate the Prophet’s personality and virtue, and establish his teachings in daily life.

Allāh (subḥānahu wa taʿālā) is the sole Creator and maintainer of all in existence:

“O man! What has made you careless about your Lord, the Most Generous? Who created you, fashioned you perfectly, and gave you due proportion. In whatever form He willed, He put you together.”[8]

It is not deemed right for mortal man to ‘play God’ in the production of statues and images, even if this was not the intention. The reason is that in the veneration of the image, especially of the dead, our reverence of its beauty may easily lead to inspiration, a sense of awe and falling into shirk. From the Qur’ān, the Sunnah and the understanding of the Salaf, Muslims are forbidden to worship idols. It is better to block any avenue that may possibly lead to shirk (of course there are concessions for the use of images in an educational setting).

In conclusion, maybe the dream of Mankind to live forever comes from the story of the first man and his wife who were tricked by Shaitaan into disobeying Allāh:

“…Your Lord did not forbid you this tree save that you should become Angels or become of the immortals.”[9]

It is fitting that we end as we began, with Peter Pan. A statue never ages or dies but one day it will crumble to dust:

Everyone upon the earth will perish, And there will remain the Face of your Lord, Owner of Majesty and Honor.[10]

[6] Bukhārī and At-Tirmidhi, narrated by ʿAbdullāh b. ʿUmar