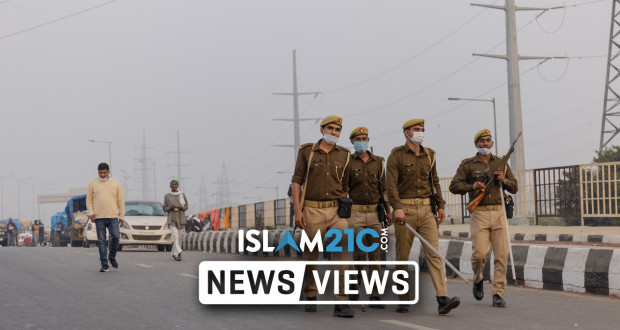 India’s ruling Bharatiya Janata Party (BJP) has been accused of further incitement of hatred against Muslims after a near-century-old masjid was bulldozed on Monday. This was done in defiance of a court order preventing such actions whilst the coronavirus pandemic continues to ravage the world’s second largest nation. [1] [2]

The place of worship – Masjid Ghareeb Nawaz Al Maroof – had stood in the city of Barabanki for close to a hundred years, according to local community members, harkening back to the period of British rule in the Indian subcontinent. Chairman Zufar Ahmad Faruqi of the Uttar Pradesh state’s Muslim body—the Uttar Pradesh Sunni Central Waqf Board, which acts as a caretaker for numerous masājid and community centres—was furious.

“This act is against the law, misuse of power and utter violation of clear orders passed by the high court. We will immediately approach the high court demanding restoration of the mosque, high-level judicial inquiry and action against the guilty officers.” [1]

Against clear court rulings, and in an attempt to rewrite history, Dr Adarsh Singh, the Barabanki district magistrate, falsely claimed:

“The action was taken as per court order. There was no mosque. It was an illegal structure where anti-social elements were staying … What the administration did was as per the law and as per the court order.” [3]

The state of Uttar Pradesh (UP) is India’s largest by population amongst its 28 states and eight union territories. If UP were classed as a nation in its own right, it would be fifth in the rankings of the world’s most populous countries.

Since 2017, the state has been governed by the rightwing nationalist BJP, with the extreme anti-Muslim Hindu monk Yogi Adityanath holding the office of Chief Minister.

In the past, Adityanath, who is a close ally of Indian Prime Minister Narendra Modi, has made highly incendiary remarks against Muslims. In an undated video that surfaced in 2014, the UP Chief Minister reportedly suggested in a public speech in the city of Azamgarh that in regards to inter-religious marriages and conversions by women to Islam, “if they take one Hindu girl, we will take 100 Muslims girls.” Adityanath went further by adding, “if they kill one Hindu, there will be 100 that we [kill] … We will return whatever they do 100 folds, with interest.” Riled-up supporters shouted “kill” in response to his rhetoric. [4]

The extremist leader of UP has also been accused in past years of giving police the licence to kill with no fear of recriminations. One particularly bizarre incident in 2018 saw journalists “invited” by police to attend a “gun battle” involving two alleged criminals who were apparently holed up in a bungalow. In reality, the police were the only ones firing bullets at the property, and the attending journalists were then barred from entering the bungalow after the incident to view the dead bodies of the supposed “criminals”. The families of the alleged criminals later confirmed that they had witnessed police torturing the men outside the house, thereafter reportedly murdering the pair in custody and staging the “gun battle” to conceal the truth. [5]

The demolition of Masjid Ghareeb Nawaz Al Maroof comes at a particularly sensitive time for Muslims around the world, with the ongoing attacks on Masjid al-Aqsa and on Palestinians who have been rallying in defence of the third holiest site in Islam. [6]

This was century-old Garib Nawaz mosque in Ram Sanehi Ghat tehsil, Barabanki, Uttar Pradesh that was demolished by administration without any legal justification on Monday night. BJP govt in the state wants its mishandling of #COVID19 crisis be eclipsed by communal frenzy. pic.twitter.com/cJ30IyNUXU

In scenes of anger and despair, local Barabanki Muslims who had been frequenting the masjid for decades were barred from initiating any form of protest in the area. Hundreds of police officers gathered and formed a barrier around the site of the masjid, before bulldozers began work on tearing down the place of worship. Chairman Faruqi shared a photograph published by the broadcaster Al Jazeera suggesting parts of the destroyed masjid were strewn into a nearby river.

In national politics, Narendra Modi has been attacked for his federal government’s abysmal response to the COVID-19 pandemic, which is continuing to ravage the South Asian nation with new daily cases of around 250,000 and around 4,000 daily deaths during the past couple of weeks. [7] Modi has also seen through blatant anti-Muslim legislation in recent years with the Citizenship Amendment Bill, which permits immigrants of a Christian, Buddhist, Sikh, Hindu, Parsi, or Jain religious adherence to legally claim Indian citizenship. Included in the bill are those who entered India prior to 2015 from the countries of Bangladesh, Pakistan, and Afghanistan. Notably absent in the religious criteria are Muslims from the aforementioned nations. [8]

With such an extreme political party in power – locally within UP state and the wider country – the demolition of Masjid Ghareeb Nawaz Al Maroof invokes bitter memories of the last major event in 1992 when Hindu extremists brought down the Babri Masjid in the city of Ayodhya, also located in UP state. At the time, the inflammatory demolition of the masjid, which was reportedly built in 1528-29, caused religious protests, resulting in 2,000 mostly Muslim deaths across India. A further 900 deaths were reported in the city of Bombay a few weeks thereafter, as many more Muslims expressed their anger at the destruction of such a significant place of worship. Some commentators have argued over the years that the Babri Masjid demolition was a catalyst for the BJP to gain national prominence in the country’s politics. [9] [10]

In the Indian political sphere, mosque-temple disputes and resulting flare-ups in tensions between Hindus and Muslims has unfortunately been “central to the Hindu supremacist politics in India”, as an article in Al Jazeera suggests. [11]

Moreover, there is another case brewing at present concerning the centuries-old Gyanvapi Mosque. Ultranationalist Hindus have lodged claims in the courts suggesting that the 17th century Mughal Emperor Aurangzeb ordered the demolition of part of the Kashi Vishwanath Temple in order to build the mosque, both of which are adjacent to one another. A court in the town of Varanasi has ordered a study to determine whether the masjid is in effect “a superimposition, alteration or addition, or [whether] there is a structural overlapping of any kind, with or over, any other religious structure.” The findings could be a cause of huge unrest, and are worth following closely. [11]