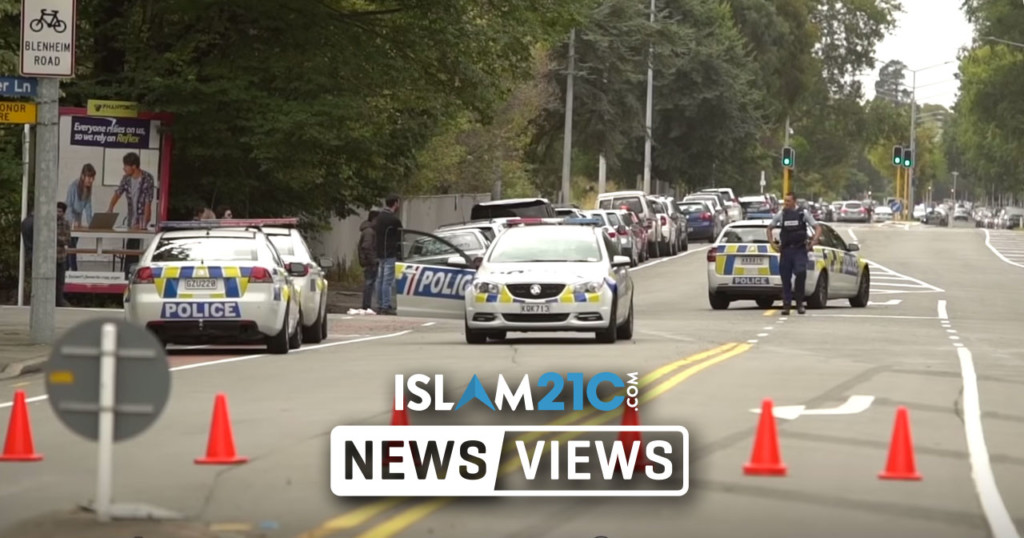 The Imām in the mosque that was attacked has given an interview describing what happened:

At least 49 Muslim worshippers were killed in two mosques in the city of Christchurch, New Zealand after several terrorists stormed the facilities during the Friday sermon.

Witnesses describe how men, women and children ran for their lives whilst people were bleeding on the ground as the horrific shooting persisted for up to 20 minutes in the light of day. In her statement to the nation, Prime Minister Jacinda Ardern said “this will be one of New Zealand’s darkest days.”[1]

It is not yet confirmed how many shooters were involved, but reports suggest that this was a coordinated, premeditated terrorist act by right-wing Islamophobes with anti-immigrant and political ideologies, inspired by notorious fascist commentators.

At least one shooter, identified by the name of ‘Brentan Tarrant’, a 28-year-old Australian, was believed to have written a sickening 16,000-word manifesto outlining his intentions and declaring his support for Trump as “a symbol of renewed white identity and common purpose,”[2] before sickeningly livestreaming the entire rampage. The manifesto appeared on the website 4chan and attracted horrifying comments in support.

Muslims Australia, the Australian Federation of Islamic Councils, said in a press release:[3]

“The massacre today is a product of the ever-increasing Islamophobia and marginalisation of Muslims and is a reminder to all concerned, including political leaders and media commentators, of the horrific consequences that an atmosphere of hate and division can lead to. No country or community is immune to such atrocities.”

Of the confirmed 49 people martyred, 41 were killed at Al Noor mosque and 7 were killed at Linwood mosque with a further victim passing away at Christchurch Hospital. At least 60 people were also seriously injured. More than 400 people were gathered for Friday Jumu’ah prayers and the shooting started at 1:45pm local time, corresponding to 12:45am GMT.

The victims include women and children as the terrorists moved to the women’s area during the killing spree. Worshippers reported rapid gunfire and pleaded to Allah that the terrorist “run out of bullets”.[4]

Parents were being advised against going to school to collect their children as police put the district on lockdown. Seemingly the lockdown has now been lifted.

Witnesses said that the Bangladeshi cricket team who were due to play in New Zealand in a test match on Saturday were present during the sermon and narrowly escaped.

In a statement released on its Facebook page at around 5am GMT, the South Auckland Muslim Association SAMA said:

“We are deeply saddened and disturbed by the attack on the Muslim community, targeted while at prayer. Our thoughts go to the victims and their families shattered by this terrible crime. It was with tremendous shock, sadness and anger that we heard of the tragic and fatal shooting in one of the Mosques in Christchurch. We condemn this terrorist attack on Muslims in the Mosque.”

The statement added that “we call upon the government and other communities alike to be vigilant in combating hatred against all minorities, knowing that prejudice and intolerance can pose a lethal threat to innocent life.”

According to The Associated Press, police say that three men and one woman are ‘in custody’ and that a number of improvised explosive devices found in the vehicles of the terrorists were diffused.[5]

In a tweet, researcher at the University of Melbourne, George Rennie, said: “this *is* political, and requires some political response, but one that rationally assesses the problem and responds accordingly.”[6]

Shocked and strongly condemn the Christchurch, New Zealand, terrorist attack on mosques. This reaffirms what we have always maintained: that terrorism does not have a religion. Prayers go to the victims and their families.

I strongly condemn the terror attack against the Al Noor Mosque in #NewZealand and Muslim worshippers. May Allah have mercy on the victims and grant a speedy recovery to the wounded.

At times like these it is more pertinent to remind ourselves of the wider perspective Allāh draws our attention to in the Qur’ān:

And never think of those who have been killed in the cause of Allāh as dead. Rather, they are alive with their Lord, receiving provision,

They receive good tidings of favour from Allāh and bounty and [of the fact] that Allāh does not allow the reward of believers to be lost.[7]

May Allāh accept those fallen as shuhadā’ and give a quick recovery to those who have been injured.