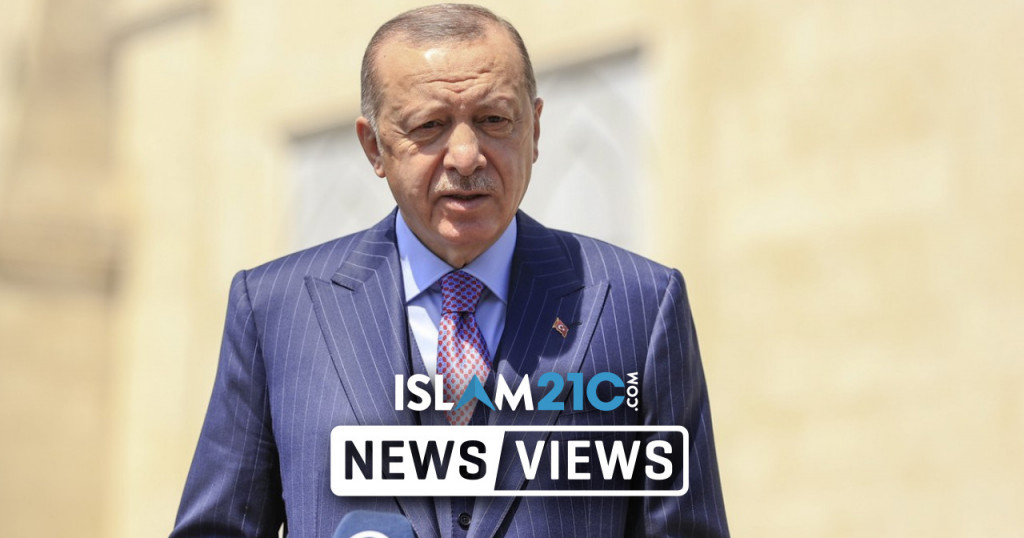 In a sign of its ever-increasing position on the world stage, the Republic of Turkey has swiftly responded to the events of the past few days where police officers and other armed personnel have launched a tirade of senseless attacks on Palestinian Muslims in the third-holiest site of Islam, al-Aqsa. [1] [2]

According to the latest figures, there have been in excess of 700 injured in Jerusalem, the West Bank, and Gaza since Israeli occupation forces raided the al-Aqsa compound once again last Friday, [3] whilst making indiscriminate use of stun grenades, tear gas, skunk water [4], and rubber-coated metal bullets against worshippers, many of whom have been attacked during prayer. It is worth noting that despite dozens of mainstream media outlets likening the situation to mere “clashes”, the reality of the attacks could not be farther from the truth. [5]

Bone-chilling scenes from video footage show prayers resolutely taking place whilst stun grenades and panicked voices are heard in the distance. Such has been the disregard by the Zionist regime for al-Aqsa, a place that is supposedly also revered by Jews. [6]

The civil rights protests—held in retaliation against an imminent Israeli supreme court ruling that will determine whether settlers can essentially rob the homes of Palestinians living in the Sheikh Jarrah neighbourhood in East Jerusalem—have been growing in number in the penultimate days of the blessed month of Ramaḍān. However, events came to a head when, on 7th May—the last Jumu‘ah of Ramaḍān—Israeli riot police began assaulting worshippers and peaceful protesters alike.

After a united global stance amongst not only Muslims but also non-Muslims, including heads of state, ‘Israel’ has postponed the court hearing that was pencilled in for 10th May. It remains to be seen when the hearing date will be rescheduled, in an extension to the bitter decades-long legal wrangling between Palestinians living in Sheikh Jarrah and Israeli settlers who wish to eject the Palestinian residents. [7]

Turkish President Recep Tayyip Erdoğan has called out the Zionist regime of ‘Israel’ for its unjustified and excessive show of force against innocent unarmed Palestinians who have been peacefully demonstrating against the apartheid state’s intention to illegally evict Palestinians in Sheikh Jarrah in order to pave the way for Israeli settlers to swoop in and rob the native people of their homes and property.

In a powerful statement, President Erdoğan said that “the cruel Israel, terror state Israel is mercilessly and unethically attacking Muslims in Jerusalem.” The Turkish leader stated that diplomatic channels had been engaged, noting that the government “immediately launched the necessary initiatives to get the United Nations, Organisation for Islamic Cooperation and all relevant institutions to take action.” [2] In relation to the planned Sheikh Jarrah evictions, President Erdoğan said:

“Otherwise, we will do everything we can to ensure the cruel are sentenced to the fate they [the aggressors] deserve.” [2]

History repeats itself. As with the foundation of the United States—which saw the displacement and genocide of the native population largely in the late 18th and early 19th centuries—the disturbing pattern in the 20th and 21st centuries is that ‘Israel’ has and continues to plan on doing the same to the Palestinians.

‘Israel’ is engaging in what many argue to be ethnic cleansing by evicting the Palestinians who have made Sheikh Jarrah their home for generations. The incoming Israeli occupiers and ‘settlers’ have, according to the majority of the international community, no legal right to gatecrash and boot out the Palestinians.

Indeed, Khaled Meshaal, the former long-time leader of the Hamas political organisation, argued on 9th May:

“What’s happening in Sheikh Jarrah is ethnic cleansing by expelling families that have a history in this neighborhood … The Ummah will prevail and its enemies will be defeated despite all the suffering it is going through and attempts to divide it.” [8]

During an event held in Morocco titled Jerusalem and the Promise of the Hereafter, organised by the Moroccan Association for the Support of the Ummah Causes, Meshaal further elaborated:

“There is no life for us without Jerusalem … Jerusalem is not a political, religious, spiritual, and civilizational capital, but rather it is the past, present, and future, and it is the land that God has promised us to be the land of decisiveness with the Zionists in the first and last round.” [8]

Across the globe, condemnations have been pouring in against the Zionist regime for its extreme use of force against unarmed and non-confrontational demonstrators who oppose the expansion of Israel’s decades-long illegal settlement programme.

Despite this, ‘Israel’ has responded by ramping up the violence. The apartheid state has launched airstrikes against targets in Gaza after Hamas released an ultimatum seeking to defuse tensions by calling on ‘Israel’ to withdraw its soldiers from the al-Aqsa compound and from Sheikh Jarrah. After the Israelis refused to take heed of these demands, rockets were fired into ‘Israel’ in a largely symbolic move, considering the strength of the Israeli Iron Dome anti-rocket defence system. [9] ‘Israel’ responded by launching airstrikes that have so far claimed the lives of 26 Palestinians, including nine children. [10]

In the UK, the only leader of the four home nations to have publicly spoken out against the Israeli aggression has been the SNP leader and recently re-elected First Minister of Scotland, Nicola Sturgeon. In comparison, the silence from the Labour leader Sir Keir Starmer has been deafening. [11]

In an expression of European unity against Israeli settlement building, the governments of Germany, Italy, France, Spain, and the UK released a brief joint statement on 6th May concerning the advancement in building 540 new settlement units in Jabal Abu Ghneim (also called Har Homa in Hebrew) in the occupied West Bank. However, the British Prime Minister has yet to speak on the issue directly to the British people.

“We urge the Government of Israel to reverse its decision to advance the construction of 540 settlement units in the Har Homa E area of the occupied West Bank, and to cease its policy of settlement expansion across the Occupied Palestinian Territories. Settlements are illegal under international law, and threaten prospects for a peaceful resolution to the Israeli-Palestinian conflict.” [12]

“This move … and continued evictions in East Jerusalem, including in Sheikh Jarrah, also undermines efforts to rebuild trust between the parties.” [12]

Attacking a place of worship at any time is reprehensible, but attacking a mosque during Ramadan is utterly indefensible. It is also a violation of international law. Israel should heed calls to halt the violence immediately. #SheikhJarrah https://t.co/4H4Bu8MCwh

“This is a Jewish country … There’s only one. And of course there are laws that some people may consider as favoring Jews—it’s a Jewish state. It is here to protect the Jewish people.” [13]

In addition, King has said that “of course” a plan exists in which “layers of Jews” will be implanted in East Jerusalem. King also suggested that policies aimed at forcefully evicting Palestinians are “the way to secure the future of Jerusalem as a Jewish capital for the Jewish people.” [13]