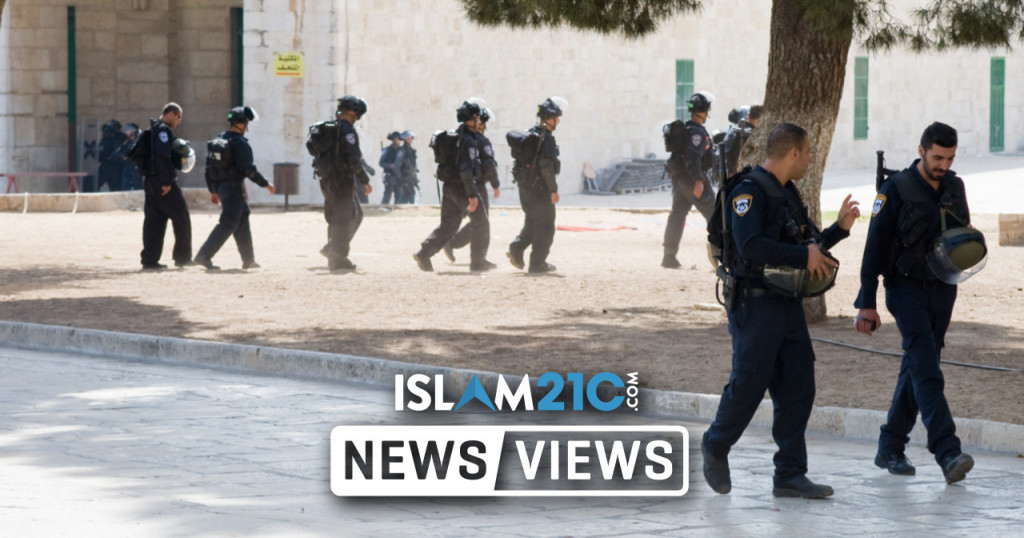 Earlier in the day, hundreds of thousands of worshippers attended the final Friday prayer of Ramadan. Some remained to peacefully protest against the unlawful eviction of families from their homes in Israeli-occupied land. Some in the crowd could be heard chanting a refrain common at such protests: “With our soul, with our blood, we will redeem you, oh Aqsa.”

Among the protestors was Bashar Mahmoud who said:

“If we don’t stand with this group of people here, [evictions] will [come] to my house, her house, his house, and to every Palestinian who lives here.”[3]

The peaceful protestors, many of whom were women and children, were violently dispersed by Israeli police.[4]

Israel captured East Jerusalem, along with the West Bank and Gaza territories, during the 1967 Arab-Israeli war. Israel annexed and occupied East Jerusalem in contravention of international law and considers the entire city to be its capital. Palestinians view East Jerusalem, within which Al-Aqsa mosque is located, as the capital and heartbeat of its future state.

Israel’s supreme court is due to hold a hearing on the internationally condemned Sheikh Jarrah evictions on Monday – the same day that Israel will celebrate its capture of East Jerusalem during the 1967 war, known as Jerusalem Day.

The court will determine if the Palestinian homes, which as conceded by Jalina Porter of the US State Department that the Palestinians have “lived in for generations”,[5] can simply be given to Jewish settlers.

Israel’s unprecedented, disproportionate, and violent crackdown on unarmed worshippers and assault on a sacred mosque has drawn widespread condemnation.

WATCH: Palestinians praying near one of the gates of #AlAqsa compound were attacked by Israeli soldiers with sound grenades.

Ned Price, a spokesperson for the US State Department, said:

‘We are extremely concerned about ongoing confrontations in Jerusalem, including on the Haram al-Sharif/Temple Mount and in Sheikh Jarrah. We call on Israeli and Palestinian officials to act decisively to deescalate tensions & bring a halt to the violence.’[6]

“We call on Israel to immediately call off all forced evictions. We wish to emphasise that East Jerusalem remains part of the occupied Palestinian territory, in which international humanitarian law applies.”

Colville added that the “occupying power … cannot confiscate private property in occupied territory”, and insisted that Israel cease actions that may lead to a “forcible transfer” which “may amount to war crimes.”[7]

Israel’s actions were also condemned across the Muslim-majority world, including Turkey, Qatar, Pakistan, Jordan, and Kuwait.

“Strongly condemning the attack this evening on al-Aqsa Mosque, our first Qibla. It is inhumane for Israel to target innocents praying during Holy Ramadan.”

“Building and expanding settlements, confiscating lands, demolishing homes and deporting Palestinians from their homes are illegal practices that perpetuate the occupation and undermine the chances of achieving a just and comprehensive peace, which is a regional and international necessity.”[8]

Perhaps the most surprising intervention came from Saudi Arabia, which has been cosying up to Israel under the Trump administration. Saudi Arabia’s foreign ministry said: “We reject Israel’s plans and measures to evict Palestinian homes in Jerusalem and to impose Israel’s sovereignty on them.”

Iran also made a characteristically unhinged comment calling for “armed resistance.” Many observers have become wary of Iran using the Palestinian people as a pawn in its long-running confrontation with Israel and the West.

Prominent British Muslim cleric and academic of Palestinian heritage, Dr Haitham al-Haddad, has urged Muslims across the world to raise their voices in protest at the Palestinian plight and Israeli aggression on Islam’s third-holiest site.

Many commentators have said that the assault on Al-Aqsa Mosque, Islam’s first qibla and the third-holiest site, is a patent provocation as it comes during the final Friday of Islam’s holiest month, which many Muslims consider to be the most sacred in the year.