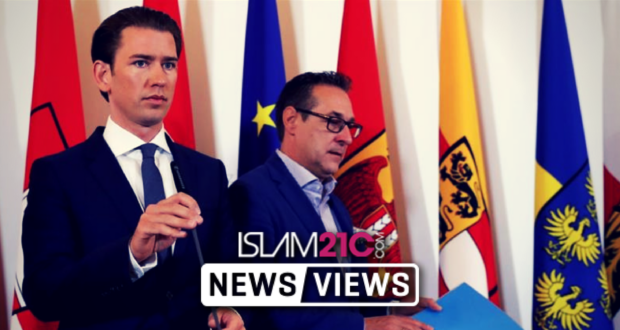 Up to 60 Muslim Imams from Turkish descent and their families face expulsion from their homes in Austria after Chancellor Sebastian Kurz ordered the closing of seven mosques in the country. The closure order includes one Mosque administered by the Turkish Muslim community and six others run by the Arab Religious Community,[1] for preaching so-called “Salafi positions”,[2] which turn out to be what many would just call “Islam”. Around 150 Turkish Muslims face being stripped of their right to residency.

The announcement was made at a press conference by members of the coalition government that includes the far-right Freedom Party (FPÖ). The party, partly founded by ex-Nazis,[3] has a track record of demonising what it calls “fake” asylum-seekers and vows to outlaw the distribution of free copies of the Qur’ān.[4]

According to Kurz, the country could no longer put up with “parallel societies, political Islam and radicalisation,”[5] echoing anti-Muslim sentiments against the country’s largest minority group, present from as early as the 1960s and one that follows the second most professed faith according to 2016 estimates.[6]

The announcement coincides with imminent Turkish Presidential and Parliamentary elections in which Turkish minority communities will cast their ballots in their respective countries of residence. The democratic election process by proxy is nothing new to the modern world but has exacerbated Western and Eastern European states and media ever since early elections in Turkey were announced, with some comparing Turkey’s incumbent and favourite, re-elected leader since 2002, Recep Tayyip Erdoğan as a dictator.[7]

In reaction to Austria’s crackdown on Mosques, İbrahim Kalin, a spokesman for the Turkish president, Recep Tayyip Erdoğan tweeted:

“Austria’s decision to close seven mosques and expel imams is a reflection of the Islamophobic, racist and discriminatory wave in this country. It is an attempt to target Muslim communities for the sake of scoring cheap political points.”[8]

1/Austria’s decision to close seven mosques and expel imams is a reflection of the Islamophobic, racist and discriminatory wave in this country. It is an attempt to target Muslim communities for the sake of scoring cheap political points.

The decision follows an investigation by Austria’s national religious affairs authority into a Turkish-financed Mosque in which children re-enacted the First World War battle of Gallopoli. The 1915-1916 eight-month battle saw the Ottoman Caliphate successfully repel the British Empire, assisted by Russia and France off the Dardanelles Strait, preventing the capture of modern-day Istanbul and resulted in some 60,000 Turkish casualties. The official event was run by the Turkish-Islamic Cultural Association (ATIB).[9]

Austria has lately proved a leader at stirring anti-Islamic and Turkophobic sentiment, with authorities trying to identify Mosques with (paradoxically) ‘Islamist’ or ‘nationalistic connections’, seemingly singling out the Muslim community with this inquisition.[10] Some have questioned whether it is possible for a Mosque to be non-‘Islamist’, but such clear definitions in a Europe veering to the right have remained out of the question.

Chancellor Kurz of the right-wing People’s Party also fuelled his 2016 election campaign on the usual anti-immigration and ‘Muslim integration’ catchphrases, which conveniently coincided with the influx of Syrian refugees into Eastern Europe fleeing death or persecution.

Although Turkey hosts nearly four million Syrian refugees who see Turkey as having welcomed them into a new homeland,[11] Eastern European governments have shown unwillingness or ineptitude in the face of international jurisdiction on refugees, ‘hunting them down in policy and practice.[12]

Kurz also demanded the EU break off Turkey’s EU membership negotiations and his government in April barred Turkish politicians from campaigning on its territory ahead of its June elections.[13]

2018-06-08
Ahmed Hammuda
Previous: Muslim who escaped China’s “integration” camp tells his story
Next: The Imperative Need for a ‘Salahuddin’ Spirit