The Imperative Need for a ‘Salahuddin’ Spirit 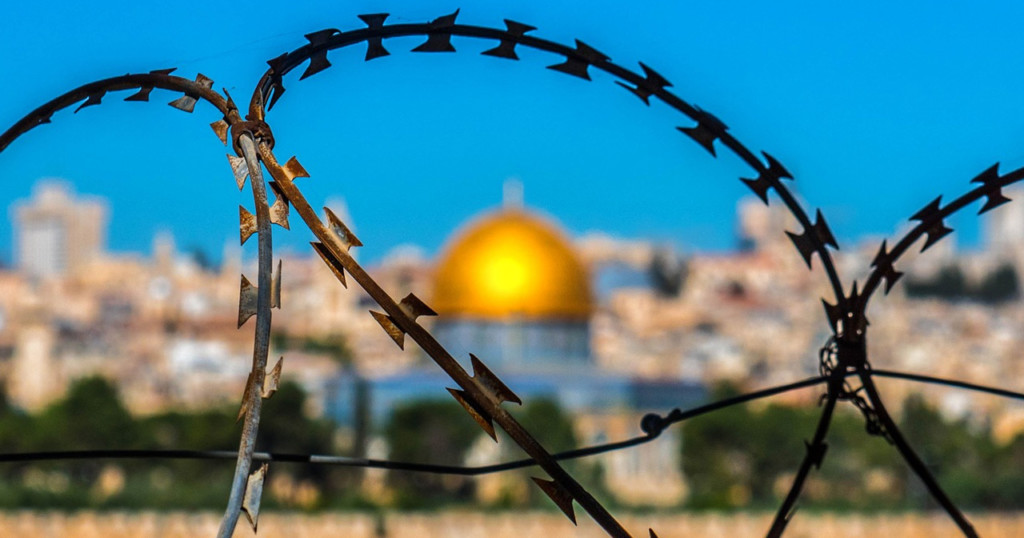 …to Rejuvenate a Rudderless Muslim Ummah

‘We will return, that is not a threat, not a wish, a hope or a dream, but a promise’

The UN Secretary General and world leaders, including EU leaders, have spoken out. But they are not alone; many millions more around the globe, too, rose up expressing strong condemnation of Israeli violence and its lack of proportionality in dealing with lawful Palestinian protests against the continuing Nakba and the ill-intentioned US embassy move to Jerusalem. More than expressing mere sympathy, scores of demonstrations, street dramas, protests at sporting events, fiery speeches in many houses of parliament, in addition to the flurry of activity on social media all demanded global action against this recent spate of Israeli Zionist tyranny. Even Arab nations – some of which have traditionally taken a nonpartisan stance on the Palestinian struggle – conveyed strong sentiments on the issue.

It is apparent that Israel’s support has been eroding in key sectors of the US population too. Recent video footage (which went viral) of Nikki Haley before a speech at a US University being booed at and interrupted by the student activists, with slogans like ‘Nikki Nikki Can’t you see! You are on a Killing Spree’ was an example of campus activism against US complicity in the crimes. Unexpectedly, even the Western mainstream media has given ‘relatively’ more importance in their columns to the latest Gaza massacre. To top it all, there has also been a significant rise in the level of opposition to the Zionist State of Israel from within. Prominent Jewish Rabbis and leaders in both US and Israeli Jewish populations have proliferated powerful messages by way of demonstrations and videos.

Despite the build-up of global opposition against continuing Zionist oppression and theft of Palestinian lands, and the US’ complicity in it; despite new and organic calls for justice to the Palestinian cause, it is nothing short of a heinous crime that some Arab leaders are letting yet another historic opportunity fall through their sheepish and spineless responses. Indeed, adding insult to injury, leaders of some Arab nations have even stooped so low in asking the long victimised Palestinian people to fall in line with Trump’s and Bibi’s ‘solution’ to resolving the conflict.

As a Muslim, I was enraged at the dehumanisation and shamelessness of Bibi who remarked at the opening ceremony of the US Embassy in Jerusalem: “It’s a great day for peace.” His is a peace divorced from reality, in the shadow of the Palestinian massacre at the Gaza border.

Although the Organization of Islamic Cooperation (OIC), under President Erdogan, was seen to pursue a tough line condemning the Israeli tyranny and US complicity, its clout has been questionable. Some major Arab nations even belittled its significance by sending low level representatives to both Summit meetings convened to discuss the status of Al-Quds. OIC, in fact, passed a resolution last year declaring Trump’s decision to move the US Embassy to Jerusalem as null and void and also declaring East Jerusalem as the capital of historic and future Palestine. Despite this, and a near global consensus to such effect, the OIC failed to prevent the US Embassy move to Jerusalem.

Erdogan was praised for toeing a tough line, but his own credibility was recently brought into question when his own party voted against the proposal to cancel agreements with Israel. The OIC could not exploit overwhelming global support and successfully coordinate for effective action even to hold an impartial UN investigation into the Gaza massacres. Australia voted with the US against the Kuwait sponsored UN Resolution to such effect while the UK and few other countries abstained – a diplomatic defeat to be sure.

Meanwhile the adventurous West has been successful in pitting one Islamic nation against another; aggravating the Shia-Sunni divide, and drawing arbitrary borders since the Sykes-Picot Agreement of 1916. All the while, Middle Eastern and South Asian Muslim nations are mired in sectarian conflict on a scale unknown in living memory. Moreover, the word Islām has become synonymous with terror,[1] whereas the Christian West, in a case of reverse reality is quick to portray itself as liberators, whose legacy in almost all Arab States continues to exist as theocracies, monarchies, and dictatorships, with no space for public dissent.

Thus, despite their numbers and resources, the Muslim Ummah, represented by the OIC, is no longer a force on the world stage. As Robert Fisk wrote in December 2017,

‘If there was anything to beat in mediocrity the childish and delinquent declaration by Donald Trump that Jerusalem is Israel’s capital, it was the pathetic response from Muslim states. For there in Istanbul […] were all the tired old men to whom we have listened for so many years, none sadder or more woebegone than the ageing and useless “President” of Palestine, Mahmoud Abbas […] There were supposed to be 57 heads of state of the Organisation of Islamic Cooperation in the Turkish capital, but some were simply too old and senile […] For the truth is that these Muslim leaders are no longer valid. They do not represent anyone. They may glance towards Moscow in the coming weeks but they are about as relevant as Tsarist Russia or the Austro-Hungarian Empire. They represent failed states with neither morality nor courage to show for their presence at the Istanbul summit’.[2]

Thus, today, though brave Gazans and Al-Quds scream for help,[3] Israeli Zionist impunity supported by US Hegemony trample over Muslim dignity. The Muslim Ummah has become so powerless that they are unable to gather forces to raise a unified voice against the oppressors; let alone act against them militarily. Today, a people of a faith which inspired a great civilization in which Muslims and non-Muslims alike lived creative and useful lives and which, by its achievements, enriched the whole world, are running back and forth, lost and unaware that they are  instrumental to their own destruction.

This reminds of the infamous Tartar Holocaust which began in 1218 CE, when Muslims were so over-awed by their power that one Mongol could kill over a hundred Muslims and none would dare defend himself. In his book ‘Crimes Against Humanity’, Adam Jones writes:

‘The human landscape sometimes seems so bleak as to hardly justify efforts to brighten it. We confront crises, looming or pervasive, on a dizzying number of fronts . . . As individuals, we may feel like the Dutch boy with his finger in the dike – except that new leaks are always springing up beyond our reach; others’ ability or willingness to help is uncertain; and even where we stand, the hole appears too big for our trivial efforts to plug it’.

This is exactly the feeling of helplessness which has entered the collective Muslim psyche when crisis after crisis hits the Muslim world. The post 9/11 period in particular and most recently, the US embassy move to Jerusalem and the Gaza massacre on the eve of the Nakba commemoration, aptly symbolise yet another example of US and Israeli impunity.

Interestingly, these trying times for the Muslims appear to have been foretold by the Prophet of Islām (sall Allāhu ʿalayhi wa sallam) more than 1,400 years ago. He is reported to have said,

“The People will soon summon one another to attack you as people when eating invite others to share their food.” Someone asked, “Will that be because of our small numbers at that time?” He replied, “No, you will be numerous at that time: but you will be like the foam carried down by a torrent (of water), and Allāh will take the fear of you from the hearts of your enemy and cast al-wahn into your hearts.” Someone asked, “O Messenger of Allāh, what is al-wahn?” He replied, “Love of the world and dislike of death.”[4]

He likened Muslims living during those times to froth. It lies atop water, weightless, not in control of its path. Happily flowing along to its destination it is intoxicated with its imaginary position (on top of the water). An apt description indeed!

What is the way forward for the Ummah to reclaim the lost Muslim dignity and Al-Quds?

It was Friar Manuel Musallam, member of the Christian-Islamic Committee in Support of Jerusalem and the Holy Places, who reminded the Muslims:

History has proved time and again, that Allāh has blessed this Muslim Ummah with social reformers and ‘Salahuddīns’ at appropriate times to reclaim Muslim dignity. It is, however, important for every Muslim to endeavour to be one themselves in these times of calamity, polluted with ‘wahn’. Perhaps, the wheelchair-bound Gazan martyr Fadi Abu Salah armed with a rock and a slingshot, a symbol of the Palestinian resistance, taught every Muslim an apt lesson on courage and ‘can do’ attitudes: Do what must be done to be Salahuddīn in your own way. Rekindle the lost Muslim spirit; be part of a Muslim awakening movement; kick-start the long journey towards reclaiming past glory; pressurise Muslim leaders either in deep slumber or involved in treacherous action. This is the least we Muslims can do. If we fail to act decisively at a time when our leaders have failed us, Allāh says:

“Allāh will not change the condition of a people until they change what is in themselves.”[5]

More importantly, Allāh’s ḥisāb (reckoning) awaits the Muslim Ummah. We will, each of us, stand before Allāh (subḥānahu wa taʿālā) and have our own bodies recount what we have done, or what we failed to do.

“Today We seal up their mouths and their hands speak to Us, and their feet bear witness to what they have earned.”[6]

What will your hands say about you?