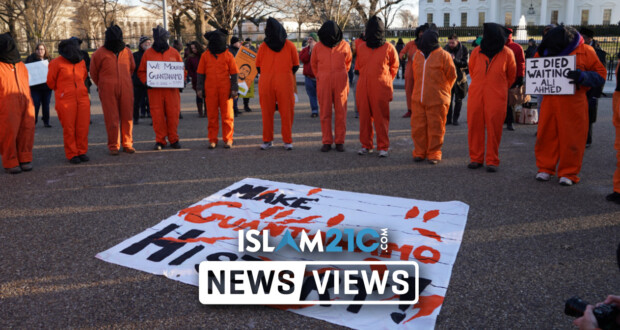 The administration of the 46th President of the United States Joe Biden has reiterated its strong intent to close the long-opposed Guantanamo Bay Detention Camp in Cuba, following a formal review initiated on Friday.[1]

White House says its goal is to have the Guantanamo Bay prison closed before the end of the Biden administration.

In response to a reporter’s question regarding the US administration’s plans concerning Guantanamo and whether it targets closure of the site by the end of Biden’s first term, White House Press Secretary Jen Psaki said, “That’s certainly our goal and our intention.”[2]

“We are undertaking an NSC (National Security Council) process to assess the current state of play that the Biden administration has inherited from the previous administration, in line with our broader goal of closing Guantanamo…”

“The NSC will work closely with the Departments of Defense, State, and Justice to make progress toward closing the GTMO facility, and also in close consultation with Congress…” [1]

Guantanamo – infamous for its widespread use of torture and gravely inhumane detention conditions of many prisoners who have never been convicted let alone tried in court for any criminal offence – was originally opened in 2002 under the Republican-led Bush administration. It was established under the guise of creating a facility to hold and question alleged terror suspects, but in reality it resulted in indefinite detention without trial of its inmates.

The first prisoners were transported to the detention facility on 12th January of 2002,[3] with the construction of “Camp Delta” a building – with a capacity for 612 inmates – opening in April of that year.[4] Over the ensuing years, there have been innumerable reports of physical, mental, religious, and sexual abuse of detainees.

A New York Times article in 2004 detailed how an investigation by the International Committee of the Red Cross (ICRC) at Guantanamo Bay found that medical professionals were complicit in the degrading treatment of prisoners, to such an extent that they would use their medical expertise to relay specific individuals’ weaknesses to interrogators, thus maximising pain during torture.

“Doctors and medical personnel conveyed information about prisoners’ mental health and vulnerabilities to interrogators, the report said, sometimes directly, but usually through a group called the Behavioral Science Consultation Team, or B.S.C.T. The team, known informally as Biscuit, is composed of psychologists and psychological workers who advise the interrogators, the report said.”[5]

In expressing the desire to shut down the notorious and extrajudicial prison site sprawled across the wider Guantanamo Bay Naval Base, Biden is invoking a feeling of déjà vu.

This move is not without foundation. The 44th US President, Barack Obama, also stated his wish to shut down the infamous detention facility during his 2008 presidential campaign, saying the prison was a “sad chapter in American history”. However, in an interview with the broadcaster ABC, the-then President-elect recognised that it would be a major hurdle, qualifying the aim to close Guantanamo by saying:

“I think it’s going to take some time and our legal teams are working in consultation with our national security apparatus as we speak to help design exactly what we need to do.”[6]

As president, Obama ultimately failed in seeing the facility closed. Despite signing a January 2009 executive order demanding its closure, there was heavy bipartisan resistance in both chambers of the federal legislature. In the subsequent Senate vote, legislators voted 90-6 in favour of Guantanamo closure funds being denied to the Government.[7]

Obama made another clear push in 2016, saying in a February announcement:

“For many years, it has been clear that the detention facility at Guantanamo Bay does not advance our national security—it undermines it. It’s counterproductive to our fight against terrorists, who use it as propaganda in their efforts to recruit. It drains military resources, with nearly $450 million spent last year alone to keep it running and more than $200 million in additional costs needed to keep it open going forward. Guantanamo harms our partnerships with allies and other countries whose cooperation we need against terrorism.”[8]

Senators pushed back again, voting 91-3 on the National Defense Authorization Act and frustrating Obama’s attempts at closing the tarnished detention centre by preventing the transfer of detainees from the Cuban detention site to prisons on American soil.[9]

In 2021, there remain 40 prisoners at Guantanamo. These are comprised mostly of Yemeni, Saudi, Afghan, and Pakistani citizens, all of whom have been unfairly held behind bars for over ten years.[10] In total, 780 people have been locked up in Guantanamo since its inception in 2002. [4]

The fate of the remaining 40 prisoners is unclear. Under the Trump presidency, very little changed in the status quo, even though Trump himself employed “braggadocious” remarks, once saying:

“Terrorists who do things like place bombs in civilian hospitals are evil… When possible, we have no choice but to annihilate them. When necessary, we must be able to detain and question them.”[11]

During the Biden-Harris administration, one may assume that there is still bound to be strong opposition in Congress concerning the complete closure of the detention site, given that Obama tried and failed multiple times to fully shutter the facility.

2021-02-13
Shaheer Choudhury
Previous: How your newborn can bring you closer to Allah
Next: Report: British Muslims have provided “remarkable level of contributions” during COVID-19 pandemic