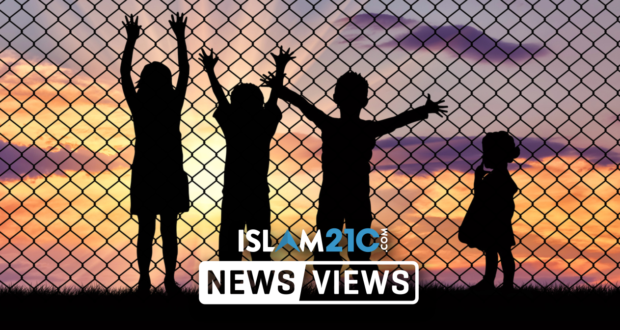 More light has been shed on the continuing culture war being waged on the Uyghur Muslim population in China. Whilst the internment camps holding approximately one million ethnic Uyghurs are familiar, little has been revealed about the plight of Uyghur children – until now.

A New York Times investigation has uncovered the existence of ‘boarding schools’ in which nearly half a million children are being held.[1] Chinese authorities insist that the schools are a privilege bestowed by the state upon the children in order to foster better educational and developmental prospects, but the reality is far more chilling.

The children are forcibly removed from their parents and/or extended family and are effectively incarcerated in such schools, often whilst their parents are held in such internment camps themselves. According to a Chinese state planning document produced in 2017, the aim of such camps and the limiting of the childrens’ contact with their family members is to “break the impact of the religious atmosphere on children at home”.[2] It appears that the Chinese regime’s objective to erase and extinguish Uyghur culture and traditions gathers apace.

The 2017 document, which was not classified, was posted on the Ministry of Education’s website. Although Islam was not specifically mentioned, the policy document stated that religion has a malevolent effect on children. The policy went further to state that having children in ‘boarding schools’ would “reduce the shock of going back and forth between learning science in the classroom and listening to scripture at home.”[3]

Little is known about what exactly occurs in these schools, and the Chinese authorities have worked hard to ensure this remains the case. Teachers from all over China have been recruited to work at the schools, which the regime envisages expanding to at least one school in each of the 800 towns that comprise the Xinjiang region. Teachers are punished if they break the strict silence they are instructed to maintain.

What is publicly known suggests that the pattern is similar to that occurring within the adult internment camps: children are taught the Chinese language, and the notion of Chinese primacy is being indoctrinated within them. Adrian Zenz, a researcher at Victims of Communism Memorial Foundation in Washington, commented:

“The long-term strategy is to conquer, to captivate, to win over the young generation from the beginning.”[4]

Parents of such children – including those abroad and who are unable to contact their children – have spoken of the pain of separation and of the fear that their children will be turned against them and taught to hate their own parents simply because of their religion and culture.

Whilst there is no doubt that attempted indoctrination on a mass scale is taking place in Xinjiang, another disturbing element has come to the fore. An investigation has revealed that those held in internment camps are being forced into labour performing menial and hard work, with abysmal wages and no option of refusal. The regime envisages the Uyghur population taking over the role of blue collar worker and, in turn, ensuring a steady supply of cheap labour for China’s insatiable manufacturing industry. It has transpired that such forced labour is supplying companies such as Muji and Uniqlo with cheap cotton. Other brands revealed by a Wall Street Journal investigation include H&M, Esprit, and Adidas among clothing companies said to receive cotton produced in Xinjiang.[5]

A Communist Party directive states that the declared aim of such labour is to “turn around their ingrained, lazy, lax, slow, sloppy, freewheeling, individualistic ways so they obey company rules.”  It appears that, not content with extinguishing the Uyghur culture, the regime has now set its sights on how to profit from their very existence. The question is surely what is on the horizon for the Uyghur children once ‘school’ is out.

There are obvious echoes of what is effectively modern slavery on an industrial scale with those of Fir’aun and Bani Israil, and of course more recently with the Third Reich and Nazi concentration camps. Arbeit mact frei (work sets you free) was the infamous slogan that appeared at the gates of Auschwitz and other concentration camps. Will the world stand up against China just as it did against Nazi Germany, at least economically and politically? If it fails to do so, then as the next global superpower, China should not be surprised if in a few decades the same dominant Chinese culture deems that other minority communities are undesirable and then seeks to intern those communities into concentration camps.