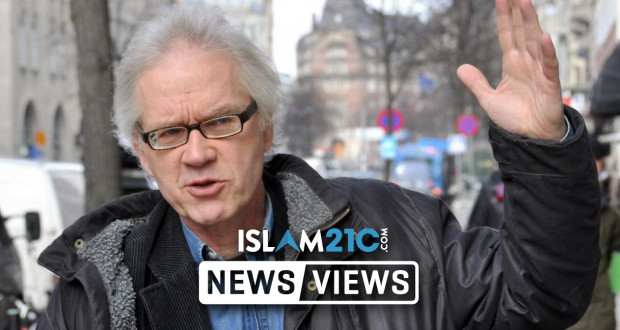 The dishonourable Swedish cartoonist Lars Endel Roger Vilks has returned to his Lord after a fatal crash-turned-inferno that occurred on Sunday. The accident occurred close to the tätort (locality) of Markaryd – 60 miles north-east of the country’s third largest city, Malmö. While speculation has been rife that foul play might have been involved, Stefan Sinteus, the head of the Swedish southern regional investigation unit, told reporters on Monday, “We want to completely exclude any external act targeting the car in which Lars Vilks found himself…” The disgraced illustrator had been travelling in a vehicle with two police bodyguards. All three were killed in the blaze that formed after a catastrophic head-on collision with a truck. [1]

Vilks was a relatively unknown visual artist until the summer of 2007, when he was dramatically hurled into international disrepute after publishing a series of drawings. In these images he appallingly depicted the Prophet ﷺ as an animal. The profoundly insulting designs drew condemnation from around the world, with senior representations made at the state level. The Islamic Republic of Iran summoned the Swedish chargée d’affaires in Tehran, Gunilla von Bahr, to the Iranian foreign ministry for a harsh verbal slapping down. Pakistan followed suit by summoning the Swedish chargé d’affaires in Islamabad, Lennart Holst, to receive a formal protest from the Pakistani government. [2] [3]

In an official statement released by Pakistan’s Ministry of Foreign Affairs on 30 August 2007, the government warned in relation to the deeply offensive caricatures:

“Pakistan condemns, in the strongest terms, the publication of an offensive and blasphemous sketch of the Holy Prophet (PBUH) in the Swedish newspaper “Nerikes Allehanda” in the city of Orebro. Regrettably, the tendency among some Europeans to mix the freedom of expression with an outright and deliberate insult to 1.3 billion Muslims in the world is on the rise. In the past also sketches and caricatures of this nature have been published in Europe in the name of the ‘freedom of expression’. Such acts deeply undermine the efforts of those who seek to promote respect and understanding among religions and civilizations.” [3]

At the time, numerous other Islamic countries including Egypt, Afghanistan, Jordan, and the inter-governmental body Organisation of Islamic Cooperation (OIC) also issued sharp criticisms of Vilks’ so-called ‘artistic’ efforts. Incredibly, Vilks’ reprehensible drawings came a mere 18 months after the scandalous Jyllands-Posten cartoons controversy in Denmark. This was when the aforementioned Danish newspaper published twelve ‘cartoons’ of the Prophet ﷺ in an apparent attempt to contribute to the debate surrounding criticism of Islam. One of the cartoonists behind the Danish attack on the Prophet ﷺ was Kurt Westergaard. Coincidentally, Westergaard died in July of this year, after suffering a protracted illness and, similarly to Vilks, lived a life of paranoia and constant police protection for fear of attacks from defenders of Islam. [4]

With the passing of Vilks and indeed Westergaard, it is important to remember the word of Allah (subḥānahu wa taʿālā), wherein He warns against those who insult or belittle His Majesty or His Prophet ﷺ.

“Indeed, those who abuse Allah and His Messenger – Allah has cursed them in this world and the Hereafter and prepared for them a humiliating punishment.” [5]

Reflections on this verse from Surah al-Ahzāb lead one to recognise the seriousness with which the belittlement of Allah (subḥānahu wa taʿālā) and His Messenger ﷺ can only lead to the utmost torment, not only in this temporary life, but also in the everlasting Hereafter.

Moreover, Allah says in the Qur’an that He will protect the Prophet ﷺ from those who seek to mock or humiliate him.

“Indeed, We are sufficient for you against the mockers.” [6]

In addition, Shaykh al-Islām Ibn Taymiyyah wrote in his book, as-Sārim al-Maslūl ‘ala Shātim ar-Rasūl (The Unsheathed Sword Against the one who Insults the Messenger), that Allah has promised to avenge the Prophet ﷺ when the Believers are unable to levy a punishment upon such perpetrators:

“It is from the Sunnah of Allah that whoever the believers could not punish from those who harm Allah and His Messenger, then Allah, glory be to Him, avenges him for His Messenger and suffices him…” [7]