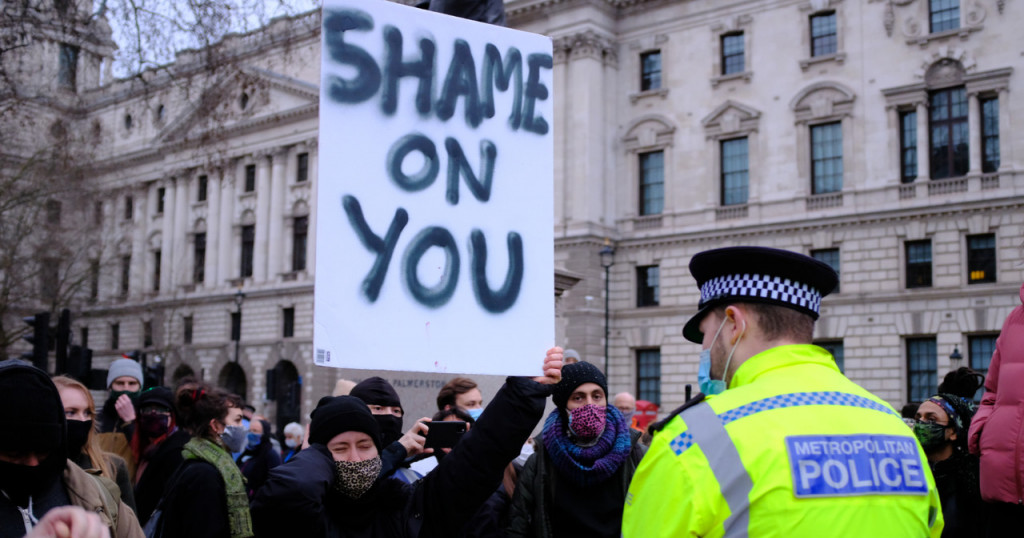 From the entire female population, it could have been any of us. But it was Sarah Everard, the young woman from London who was tragically murdered by the ruthless maniac PC Wayne Couzens.

On the evening of 3 March 2021, Couzens used his Metropolitan police warrant card and handcuffs to abduct Ms Everard under the guise of an arrest. She was walking home from a friend’s house in Clapham, south London.

With Sarah bundled in his car he drove 50 miles before raping and strangling her to death. Days later Couzens even burned her body in an attempt to hide it.

As details of the police investigation emerged during the trial this week, public outcry turned towards the Metropolitan police force for the catalogue of failures they were responsible for during the murder investigation.

Failures that reflect an institution

The trial revealed that Couzens, an off-duty diplomatic protection officer serving at the US embassy, had a troubling record. He had been linked just two days before Sarah’s murder to two allegations of indecent exposure, as well as a previous incident of indecent exposure in 2015.

That these incidents were so easily ‘missed’ by detectives is damning evidence in itself against both the Kent and Metropolitan police forces. They clearly failed to understand that such perverse behaviour warrants serious attention and that this sexual predator should have already been sacked and sentenced.

To add to this blatant negligence, the trial also revealed that Couzens was on a WhatsApp group with five other police officers who are currently being investigated by the Independent Office for Police Conduct (IOPC) for gross misconduct. The court heard that together they exchanged with one another “discriminatory” messages, which included “misogynistic content”. At least three of them face criminal investigations under Section 127 of the Communications Act, which addresses material that is “grossly offensive or of an indecent, obscene or menacing nature”.

As if further proof of Couzens’ depraved character was needed, his colleagues admitted to the court that they provided him the nickname “the rapist”.

In light of such undeniable institutional failings, police chiefs and government members are desperately focusing on rebuilding the public’s trust in the constabulary force. Currently, the focus seems to be on reiterating safety precautions which include not walking alone after dark, avoiding the use of headphones, staying in well-lit areas, texting your location to friends, wearing dark clothes, and carrying keys in your hand as a weapon.

However, this safety advice is not only deeply flawed, but it is highly irrational. One should recall that several recent high profile attacks occurred when women were in known and well-lit locations. This includes the sisters Bibaa Henry and Nicole Smallman, who were brutally murdered together in a large park. Furthermore, Sabina Nessa was wearing dark coloured clothes. This type of discourse lays the burden of safety upon the victims alone, without even examining the causes of the violent offences, or questioning why such atrocities are increasingly prevalent in a so called progressive and civilised society.

Understandably, the collective pain which women feel and the fallout of the investigation has galvanised another generation of women intent on challenging prevailing attitudes towards violence against women. Subsequently, amid the vigils and protests, ‘Reclaim the Night’ is being invoked again since Sarah’s death. This was a 1970s movement sparked by the murderer Peter Sutcliff, who was also known as the Yorkshire Ripper. As such, the broader public discourse now revolves around misogyny in the police force, the marginalisation of women, toxic and sexist attitudes, and outing the grossly misinformed. A shocking example of these concerns can be found in North Yorkshire commissioner Philip Allott, who sparked fury when he said that Ms Everard “never should have submitted” to the arrest by her killer!

However, what is missing from this all too necessary discussion is a holistic view towards the interactions that men and women will naturally share in society, and what real governance looks like. This is important because the overall view towards women among wider society will obviously affect police officers, given that they too are a part of that association.

It is widely recognised that toxic attitudes towards women are widespread in all secular liberal societies, and these are predominantly nurtured via pop culture and the entertainment industry. The social sphere now includes social media and applications, through which all forms of explicit personal freedoms are expressed.

Liberalism is the natural outcome of every secular democracy, and it has shifted the goal posts of morality and common decency. This is to the extent that more than ever before people avoid responsibility for their lapses in behaviour. Once noxious thoughts become prevailing social norms, and the ‘new normal’ as it is known naturally permeates all sections of society alongside civil institutions and government, things rapidly fall apart. The abysmal status quo makes life for too many a lottery between falling victim to egregious behaviour and escaping it.

Islam as an alternative view

Islam is an alternative doctrine to that of today’s secular society, as it deals with men and women systematically. The Shariah rules that Muslims are required to uphold in their interactions with the opposite gender in public and private life are exquisitely orchestrated by our Lord Allah عز و جل alone.

For example, the laws relating to our dress codes, gender separation in certain environments, and the license to interact freely at times of necessity all work in harmony with the recommended mannerisms that are best suited to the nobility of our God given human nature (fiṭrah). These are just some of the divine standards which give us knowledge about the honoured status and value of a woman. They are Islamic standards which indicate the worth of every woman, old or young. This is the case regardless of her social status, wealth, beauty, physique, or abilities.

So any crime against a woman in a society where she is deemed so precious will of course be viewed in the most serious way – and the seriousness of the crime will be reflected in the measures taken by the authorities against the perpetrators.

This is epitomised by the example of our beloved Prophet Muhammed ﷺ , when he lay siege at the fort of the Banū Qaynuqāʿ for fifteen days. This occurred after the abuse of a Muslim woman, in which the Muslim man who came to her aid was killed. Similarly, when Muhammed ibn Qāsim was sent by al-Ḥajjāj ibn Yūsuf in 88 AH to free the Muslimah captured by pirates in Sindh, the value of a woman and the duty of government was perfectly established as the gold standard of just rule.

The revival of proper Islamic governance in the Muslim world based on the noble truths of prophethood – as promised by our leader Muhammed ﷺ – could restore the value of women throughout society. This is because Islam is the only way of life with detailed social laws – that, when combined correctly – organise the relationships between men and women. Additionally, Islam’s highly accountable governing structures could simultaneously provide security for all.

“The believers, male and female, are friends to each other. They bid virtue and forbid vice and establish ṣalāh and pay zakāh and obey Allah and His Messenger. Those are the ones whom Allah will bless with mercy. Surely, Allah is Powerful, Wise.”[1]

Segregation and the Useful Idiot Paradigm

Maleeha Fahimuddin is a teacher and writer based in London. She has been active in the Muslim community for thirty years, delivering lectures and workshops on challenges faced by Muslims in the UK and abroad. She is a student of Islamic studies and a mother of three.