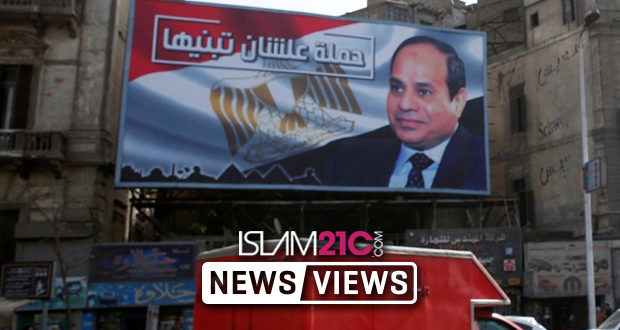 Egypt’s Al-Nour Party has emerged as one of the staunchest supporters of the head of the coup regime, Abdel Fattah al-Sisi, in the Presidential ‘contest’ set to take place this March. Sisi, who militarily overthrew Egypt’s first democratically elected president Dr Mohamed Morsi in July 2013, will ‘fight’ the presidential contest all alone, after his military regime brought down all other contesters through threats, intimidation[1] and arrest.[2]

The Al-Nour Party’s head, Younes Makhyoun, defended its position by holding that Sisi “is the most capable to carry out these heavy responsibilities.”[3] Despite this earnest belief in the capabilities of the military governing state institutions rather than itself or other such civil candidates, Al-Nour ran for office in both the 2011-2012 Presidential Elections and the Parliamentary Elections of the same period, securing 111 seats.

Makhyoun, whose party was originally deemed a component of Egypt’s Islamic representation, was present during Sisi’s announcement on the 3rd of July 2013 following the coup.[4] This coup later paved way for the two massacres against Morsi supporters in the sit-ins of Rabaa Al–Adawiya and al-Nahda squares in August 2013.

Al-Nour rationalised its support for the military as an effort to “preserve Islamic identity and Sharia“.[5] It lost all but 11 of its seats in the 2015 Parliamentary ‘Elections’ to liberalist and secularist parties, and has faced numerous battles against calls to its dissolution despite their disavowal of the Muslim Brotherhood as within the sphere of so-called ‘Islamist’ political parties.

Ministers of the coup regime formed an administrative committee in an attempt to dissolve the party and so ban all ‘religious’ political parties from Egypt under the pretext of ‘opposing the Brotherhoodization of Egypt.’[6]

Al-Nour Party (meaning the Party of Light), popularly known as the Al-Zour Party (Fake Party), has nonetheless exploited its standing as the remaining ‘Islamic’ party in the constituents of the coup regime. In December 2017, it issued religious jurisdiction or a Fatwa claiming it is ‘impermissible’ to contest with Sisi.[7] Ironically, the owner of this ‘Fatwa‘, who is of the most outspoken promoters of the party, had unequivocally declared in January 2013 that he would never form a coalition with the Brotherhood’s Freedom and Justice Party.[8]

Al-Nour Party’s decision to support the secular coup regime is widely recognised as a conscious move away from the Islamic principles it claims to represent and a result of pressure applied on it from its gulf backers, many of whom have stood faithfully with Sisi to quell Islamic representation in politics and welcomed the coup.[9]

The presidential one-man race will be held from March 26 to 28 in which Sisi is obviously expected to win. Sisi has nonetheless promised “free and transparent” elections “characterised by equal opportunities between candidates.”[10]