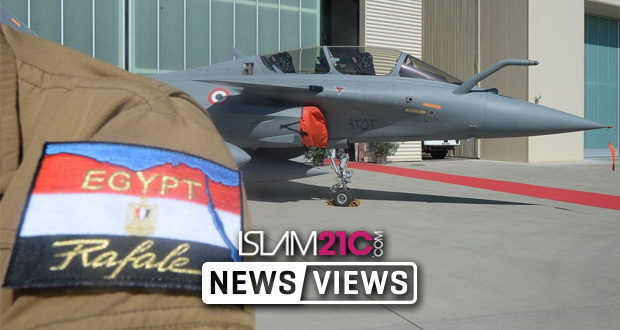 “The worst kind of calamity is that which [is so bad], it makes you laugh” is a popular Arabic expression. Ever since Arab governments were usurped by military leaders, economic, social, legal and industrial ineptitude was all but expected. Maybe the only thing they were thought to display some signs of success in is the military, or at least, in knowing how to buy military equipment or simply understanding that the military equipment is supposed to inflict damage.

The latest of the Sisi’s regime’s spree of comic book, epic failures was exposed by French Newspaper ‘La Tribune’. The mortifying revelation claimed that the 24 Rafale Fighter Jets, purchased after three years of arduous legwork by the coup regime, as part of a whopping contract worth over $5.2bn straight from its floating economy have not been equipped to carry guided rockets.[1]

Nearer the start of the deal, American website ‘Defence News’ claimed that a source close to the deal said that the jets “will be modified to remove nuclear missile capability and NATO standard communications.”[2] The complete disability of what the Rafale boasts as standard after having already handed over huge sums of cash seemed out of the military coup regime’s radar. This is despite Qatar, India, Kuwait and the UAE opting out of buying the same jet.[3]

It became apparent that the first batch of 12 ‘fighter’ jets were better suited for Japanese Kamikazes and military displays, with the delivery of four timed for the opening of a new waterway on the Suez Canal.[4] Embarrassingly, the coup regime agreed to purchase a further dozen in 2016 “on condition that they carried cruise missiles or had the capability of carrying cruise missiles.”

In other words, the first batch of ‘fighter’ jets was, in fact, wholly useless as far as modern warfare is concerned. After a further two years of negotiations with the French, it became clear that it was actually the US authorities who were obstructing Egypt’s ‘conditions’ since the Rafale’s cruise missiles contain US components.[5] Sisi’s regime needs to do even more to prove its blind loyalty to the US and its regional interests.

Head of the Political Bureau of the Egyptian Revolutionary Council, Amr Adel, said that “the responsibility (of this failed transaction) is on the Egyptian regime with all its institutions,” adding that “what is being talked about in terms of identifying culpability and establishing truths first requires there to be a state; currently there is no state in Egypt.”

Adel, an expert and Doctor in Mechanical Engineering, added that:

“Military capabilities rely on the manufacturer, not on what is requested. If a nation’s military capabilities rely entirely on the outside world, what it gets will definitely be what that selling nation sees to be in line with its interests and political balances… (for instance, what the US) sells to the Zionists is far superior to what it sells to the so called Egyptian Army.”[6]

2018-03-23
Ahmed Hammuda
Previous: Babu & Mike’s “Alternative” to Prevent – like putting lipstick on a pig
Next: Eight months in prison for a slap; nine months for murder