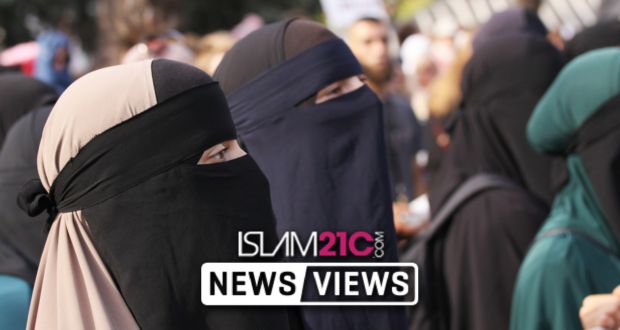 Following the start of a controversial ban on Wednesday, a 28-year-old niqab-wearing woman is the first to be fined by Danish police.

The incident took place on Friday in Horsholm city, in the north-eastern area of Nordsjælland, after police were called to a shopping complex. The woman came into contact with another woman, who attempted to grab and rip her niqab off, leading to a brief scuffle.

“During the fight her niqab came off, but by the time we arrived she had put it back on again”.[1]

After details of the event were taken down, the woman was charged a 1,000 kroner fine (equivalent to nearly £120) and police requested she either take off the niqab or leave the area. She decided to keep it on and chose the second option. [2]

Commonly dubbed as the ‘burqa ban’, from the 1st of August, legislation came into effect that essentially banned all clothing covering the face. [3]

This includes items such as balaclavas and masks, however, this new law primarily impacts Muslim women across Denmark with its inclusion of the niqab and the burqa.[4]

Some women have vowed not to comply with the ban by keeping their religious attire on, despite the penalty of up to 10,000 kroner (equivalent to nearly £1,200) for those who breach the law repeatedly. [5]

Earlier this week, crowds of protesters flocked to the Danish capital city of Copenhagen in opposition to the contentious ban, including people of all ages and backgrounds in improvised face coverings alongside Muslim women. [6]

Whilst government officials have stated that the ruling is not directed at any religion in particular, many of its opponents view it as unfairly discriminating against Muslim women. Amnesty International’s Deputy Europe Director Fotis Filippou said in a statement:

“This ban will have a particularly negative impact on Muslim women who choose to wear the niqab or burqa. If the intention of this law was to protect women’s rights it fails abjectly. Instead, the law criminalizes women for their choice of clothing – making a mockery of the freedoms Denmark purports to uphold.” [7]

The photo, which quickly became one of this week’s most shared images in Denmark, has highlighted the ban and brought the attention of people from across the globe to the issue. It has also provided some hope to protesters and opponents of the ban and its implications for the future. [8]

2018-08-05
Habib Momin
Previous: “He was more beautiful than the moon” ﷺ
Next: Turkey hits back over US sanctions