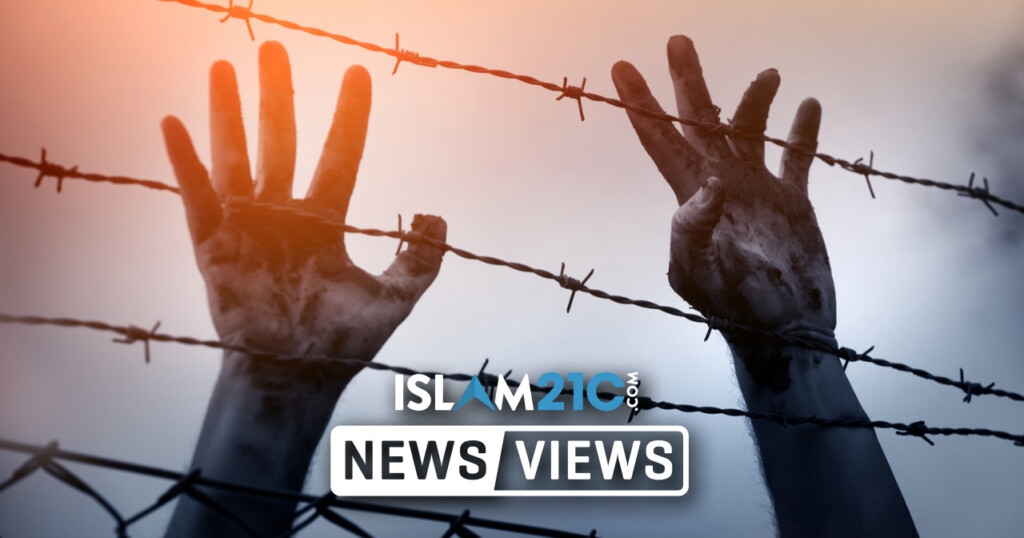 In an historic judgment by a German court in the southwestern city of Koblenz, a Syrian former intelligence officer who previously declared that he could hear daily screams of victims of torture in the detention centre where he was based in Damascus [1] has been found guilty of being an accomplice to crimes against humanity. The man has been sentenced to four-and-a-half years in prison. [2]

In what is being described as a rare and “historic” victory, 44-year-old Eyad al-Gharib has finally been handed a jail term. [3] [4] [5] It has been nearly a decade since the start of Syria’s brutal civil war in March 2011, with over 6.5m people internally displaced within the devastated country, and a similar figure fleeing abroad and becoming refugees, with close to 400,000 total deaths.

Al-Gharib, a former colonel in the Syrian intelligence service, was convicted of travelling in vehicles that transported 30 detained protesters to al-Khatib, a notorious prison in Damascus. The protestors were said to have been beaten on their journey to the detention facility. Al-Gharib participated in the transport of the captured demonstrators despite knowing of the systematic torture that took place at the jail. [6]

The conviction and preceding trial came about as a result of Germany implementing a 2002 law that affirmed the principle of “Universal Jurisdiction”. This allows German courts to try defendants for offences that are designated in the Rome Statute, the treaty that established the International Criminal Court and recognised a quartet of international crimes: genocide, war crimes, crimes against humanity, and the crime of aggression. [7] [8]

Over the years, there have been numerous harrowing accounts of abuse taking place at al-Khatib, also known as State Security Branch 251.

One prisoner, Yaser Abdul Samad Hussein Karmi, who spent four months in the jail, recounted in 2013:

“As soon as I arrived, the officers there started battering me, which was the most brutal way of torturing in the Branch, where two members or more hit the detainee strongly all over the body, especially on the face and the head. then they shocked me with high voltage electricity, 220 volts, on my thighs, shoulders and sensitive organs [genitals] for four repeated times, then they brought a cable- a car wheel cut in a certain way with a width of about 10 cm- to hit me on my back and feet.” [9]

The horrific conditions at al-Khatib have also been detailed in a report by Human Rights Watch, which showed that not only are prison officers complicit and responsible for the torture of detainees, doctors have also been reported to engage in the beating and abuse of prisoners.

“Authorities provided detainees with grossly inadequate medical care in detention. Some witnesses said that sick detainees only received paracetamol, an over-the-counter painkiller, and even that only in severe cases. Others said that while doctors were sometimes available in some branches, the doctors also beat and abused detainees to the point that detainees chose not to seek their attention.” [9]

With the conviction and sentencing of Eyad al-Gharib settled, the spotlight quickly turns to his co-conspirator and former superior officer, Anwar Raslan.

In April 2020, both Raslan and al-Gharib went on trial for war crimes committed in Assad’s torture apparatus. Raslan, 57, is charged with even more heinous crimes than al-Gharib: rape, aggravated sexual assault, crimes against humanity, the torture of 4,000 people, and 58 murders. [10] His trial is expected to end in October.

In welcoming the judgment on al-Gharib by Judge Kerber, Anwar al-Bunni, a key eyewitness for the prosecution who was once arrested by Raslan, said:

“This decision is historic because it condemns the entire criminal system that is the Syrian regime. Gharib is one man but he was part of an organised machine with orders to arrest peaceful civilians, disappear them, torture them, kill them and hide their bodies in mass graves…” [5]

May Allāh grant victory to the believers, if not in this world then certainly in the next. Āmīn.