#STAND4UYGHURS
Home / News / Hamas calls for an uprising against Israel on Friday: “Day of Rage” 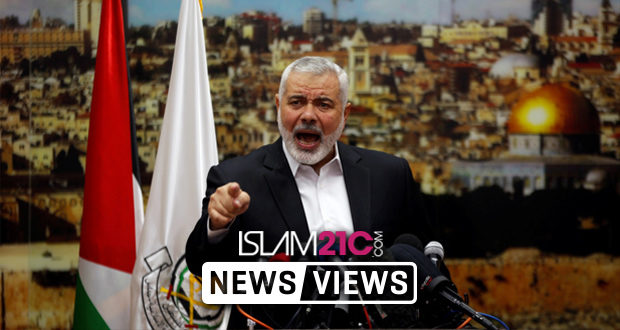 Hamas calls for an uprising against Israel on Friday: “Day of Rage”

On Thursday, the Head of the Political Bureau of the Islamic Resistance Movement “Hamas”, Ismail Haniyeh, called for an uprising against Israel following President Donald Trump’s formal announcement on Wednesday to recognise Jerusalem as the capital of “Israel”.

During a speech in Gaza, Ismail Haniyeh stated,

“We should call for and we should work on launching an intifada in the face of the Zionist enemy.”[1]

The new leader of Hamas was elected as the movement’s head this May. He called on Palestinians and Muslims around the world to hold rallies this Friday calling it a “day of rage”.

“Let December 8th be the first day of the intifada against the occupier.”

Both Israel and the United States consider the resistance movement a terrorist organisation.

Hamas has fought three wars with Israel and was democratically elected in 2007 with an overwhelming majority.

What does the law say?

The 1960 Declaration on the Granting of Independence to Colonial Countries and Peoples and the Fourth Geneva Convention as well as its subsequent protocols, has been argued to present the legal right for the Palestinians to fight for their freedom from occupational forces.[2][3]

“2. Reaffirms the legitimacy of the struggle of peoples for independence, territorial integrity, national unity and liberation from colonial and foreign domination and foreign occupation by all available means, particularly armed struggle.”[4]

Hamas has nonetheless been dubbed a Terrorist Organisation by the United States and the European Union despite its newest charter clarifying that its armed resistance is in conformance to international ‘norms and laws’:

“Resisting the occupation with all means and methods is a legitimate right guaranteed by divine laws and by international norms and laws. At the heart of these lies armed resistance, which is regarded as the strategic choice for protecting the principles and the rights of the Palestinian people.”

Reiterating that the Palestinians have both a moral and legal right to resist the illegal occupation by the Zionist entity, Haniyeh stated that,

“We have given instruction to all Hamas members and to all its wings to be fully ready for any new instructions or orders that may be given to confront this strategic danger that threatens Jerusalem and threatens Palestine.”

“United Jerusalem is Arab and Muslim, and it is the capital of the state of Palestine, all of Palestine.”

Moreover, Haniyeh demanded that President Mahmoud Abbas withdraw from any form of peace-making with Israel and to boycott the US administration.

“It should be announced that the so-called peace agreement was buried, once and for all, and that there is nothing called a partner for the Palestinians in peace,” he said.

2017-12-07
Hamad Momin
Previous: Al-Quds (Jerusalem) is an Islamic land and no one can change that reality
Next: Protests in Palestine; Under-Reported and Under-Supported