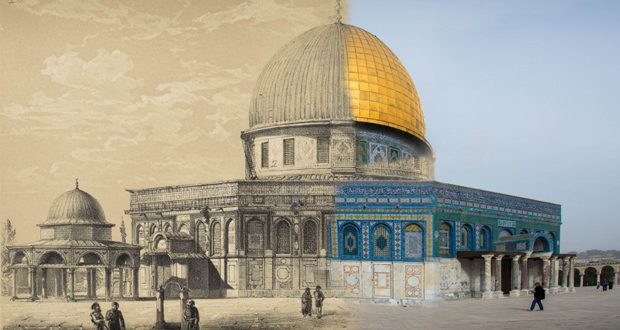 All praise is to Allāh, and Salutations and prayers are upon the Messenger of Allāh (sall Allāhu ʿalayhī wa sallam)

Al-Quds, or Jerusalem, is an Islamic land and no one can change that reality.

“Exalted is He who took His Servant by night from al-Masjid al-Haram to al-Masjid al- Aqsa, whose surroundings We have blessed, to show him of Our signs. Indeed, He is the Hearing, the Seeing.”[1]

Al-Quds has always been the icon or reference point which exposes the reality of the relationship between the three faiths of Divine scriptures; Islam, Christianity and Judaism. And, as a result, all three faiths have always had interest in it and hence it is a place where major global conflicts will take place.

Despite the emergence and violent imposition of secularism, the global status of Al-Quds is testament of the continuance and the presence of faith in people’s lives.

The move by Donald Trump to make attempts to recognise Jerusalem as the capital of an illegal state, “Israel”, not only exposes the reality of the US as a supporter for aggression against Muslims, but it exposes the humiliated status of the current contemporary political leaders of the Ummah. Muslims are routinely accused of provoking conflicts with other peoples but the reality is clearly that they are only reacting to the provocation carried out by the likes of Trump and those before him. The real question is who is to blame?

Palestine has been under occupation for over half a century and this announcement comes as no surprise to us, rather it is a reminder of the on-going occupation and loud call to the Ummah.

The status of Al-Quds and Al-Aqsa are of the most critical issues of our time and a call for Muslims to wake up and stand up all over the world. This Ummah might have become weak yet it will never die, and now is the time we must urge one another to oppose this move with all the tools at our disposal. This illegal and bloody occupation has reached its zenith – and we must not let it succeed.

For our readers, there are certain action points we can achieve in both the short term and long term. They are as follows:

Demonstrate our anger by all possible means. Expressions of anger and outrage are important rituals to achieving a defined outcome.

Send incessant letters of condemnation of the decision to all accountable and representative parties.

Present to the world that Al-Quds does not only belong to the Palestinians but to every single Muslim all over the world.

We urge the Imāms of the mosques to focus their Khutbahs on this appalling state of affairs. Some points they could raise are:

1. What has happened and what this means for Jerusalem, Palestine, and the Muslim world.

The formal Judaisation of Jerusalem and ‘legalising’ the change of the status quo of Masjid al-Aqsa. This will lead to granting Israelis full control over al-Aqsa and other religious places in the city. This poses a real threat to al-Aqsa. It might encourage other countries to follow the footsteps of the US.

2. The importance of Jerusalem from the Qur’ān and Sunnah and its relationship and link with al-Masjid al-Harām.

3. State the problem; that people have forgotten it and neglected it as a political problem or a nationalistic one. The current state of Palestine and the recent announcement as regards Jerusalem is a result of the weakness of the Muslim Ummah.

4. The inaction of the leaders puts the requirement on the lay to act; each Muslim according to their means. As we are told by the Prophet (sall Allāhu ʿalayhi wa sallam),

There was no fourth option given to excuse the Muslims of inaction. Allāh (subḥānahu wa taʿālā) will not ask the average Muslim why they did not liberate Palestine or al-Aqsa but He will ask why they did not do what was in their capacity to raise awareness, apply pressure, and contribute to bring eventual change.

5. Offer advice as to what can be done by the layperson, and why.

“And when a community among them said: “Why do you preach to a people whom Allāh is about to destroy or to punish with a severe torment?” (The preachers) said: “In order to be free from guilt before your Lord, and perhaps they may fear Allāh”.”[3]

Allāh (subḥānahu wa taʿālā) looks at the input of each person and their personal moral responsibility, rather than outcome.

We must work towards re-establishing the unity of the Ummah.

As a practical measure, terms of reference in academic material, writings and sermons should differentiate true legality and illegality from what is about to become a new reality imposed by the US. In other words, Jerusalem ought to be eternally recognised as the capital of Palestine and inferences to ‘Israel’ should not be made unless the word ‘occupation’ is used. It is all too easy for this generation to remember and for the next one to be acclimatised to the ‘new’ reality imposed by US data systems, search engines, corporations and political institutions.

We must prepare ourselves for greater and more drastic conflicts over Al-Quds.

We Muslims must be ready to sacrifice our selves and our means to preserving the sanctity and status of Al-Quds.

To conclude, it is important that we recognise that in this announcement there is a lot of khair. Through this, our Ummah will now come to understand the reality of the Palestinian conflict—or rather, the Israeli occupation—more and this will serve to awaken the Ummah once more.

“And thus do We detail the verses, and [thus] the way of the criminals will become evident.”[4]

Every Muslim should also consider this the formal death of the so-called “peace process” and the end of the Oslo Agreement. Jerusalem ought to be approached unilaterally, focusing on the objective of liberation rather than ‘reconciliation’ with the de facto status quo of the Zionist occupation. The siege over Gaza will either end or the resulting situation will expose the hypocrisy of some Muslim countries.

Al-Aqsa has forever been a cause that needs sacrifice, and ultimately a way to victory. The story of Nūr al-Dīn, Salāh al-Dīn, Qutūz and others was underlined by sacrifice.

Sacrifice of money; by regularly financially supporting Palestine and the families of al-Aqsa. Let us look for those institutions that directly fund those families and their solidarity, invest in resources, education and tools to that end, each according to their ability.

It demands sacrifice of time; for it to be introduced religiously into our curriculums and education of our children. We need to be intimately aware of the virtues of al-Aqsa, internalising them as we do a Sūrah from the Qur’ān. Sacrifice of time entails writing, speaking, authoring, raising awareness and campaigning. It may be arduous and toiling, but this is Jerusalem.

Notice that the āyah of al-Aqsa from Sūrat al-Isrā’ mentioned at the beginning was one revealed in Makkah; and Makkan verses are known to address core, creedal issues and ʿAqīdah. Jerusalem is part and parcel of our identity as Muslims and by rejecting the occupation, beyond it being a humanitarian and moral stance, we are wishing that Allāh be venerated in and around Jerusalem.

Previous: Trump to formally recognise Israeli annexation of Jerusalem
Next: Hamas calls for an uprising against Israel on Friday: “Day of Rage” 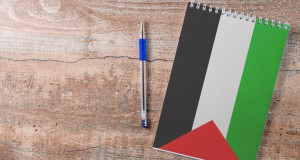